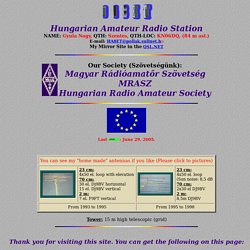 Tower: 15 m high telescopic (grid) Thank you for visiting this site. Iambic Master - NA0N. Iambic Master is a free program intended to be used as a training aid for sending CW using an iambic keyer, specifically a Winkeyer from K1EL Systems. 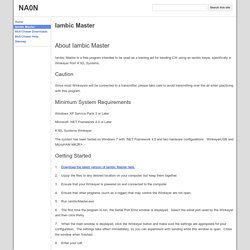 Caution Since most Winkeyers will be connected to a transmitter, please take care to avoid transmitting over the air when practicing with this program. Minimum System Requirements Windows XP Service Pack 3 or Later Microsoft .NET Framework 4.0 or Later. 2016 - 2017 Declinations of the Moon. For easy day to day references, the tables display the Moon's declinations at four times per day in Standard Greenwich Mean Time at Midnight. Exdek* (Out of Bounds) is Bold Red. When the Moon is transiting through the upper portions of the Hidek**, within a degree of transiting Out of Bounds, it will appear in red.

The Moon does not always transit into the extreme declinations. During some years, it will not even transit into the high declinations. The Moon's transit through the declinations will cycle between nominal highs and extreme highs over a period of about 18 years. The graph at the bottom of the page is only for the Moon. Home of the Collins Radio Association. 75A2 Restoration Here’s what I started with: And here’s the finished receiver all ready to go back into its case (RF cover not installed in pics). 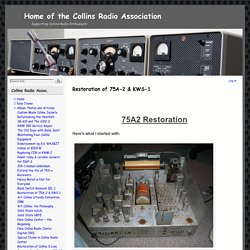 Several people have asked how I did this, so here’s the inside scoop…. First, with any serious restoration, you have to strip it down! You simply can not get into all the crooks and crannies otherwise. So first thing is to strip it down. All the iron is removed and I usually repaint it. The Sproutie – A General Coverage Regen Receiver with Plug-In Coils. NOTE – Many thanks to Aaron N9SKN and Cliff WA9YXG, who pointed out errors in the schematics. 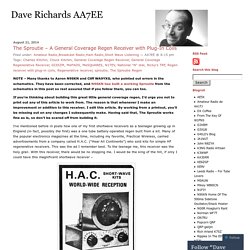 They have been corrected, and N9SKN has built a working Sproutie from the schematics in this post so rest assured that if you follow them, you can too. If you’re thinking about building this great little general coverage regen, I’d urge you not to print out any of this article to work from. The reason is that whenever I make an improvement or addition to this receiver, I edit this article. The WBR – A Simple High Performance Regen Receiver for 40M by N1BYT.

EDIT (July 26th 2014) – If you’re thinking of building the WBR, I strongly suggest you check out my most recent build here, which incorporates a mod suggested by LA3PNA, and a different configuration for the AF amp that I think provides nicer sounding audio. 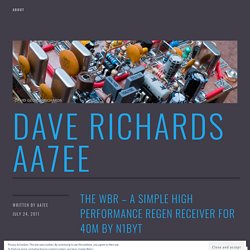 The full schematic is published there also. A Tuned Loop Antenna For The AM Broadcast Band. As a follow-up to the previous post, in which I discovered that the Sony SRF-59, though cheap to purchase, offered surprisingly good performance due to a rather creative and interesting receiver architecture. 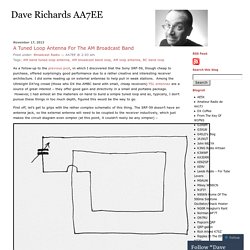 I did some reading up on external antennas to help pull in weak stations. Among the Ultralight DX’ing crowd (those who DX the AMBC band with small, cheap receivers) FSL antennas are a source of great interest – they offer good gain and directivity in a small and portable package. However, I had almost all the materials on hand to build a simple tuned loop and as, typically, I don’t pursue these things in too much depth, figured this would be the way to go. First off, let’s get to grips with the rather complex schematic of this thing. The VK3YE Micro 40 DSB Transceiver. I have attempted to build 2 DSB transceivers now with limited success – a Manhattan version of G3WPO and G4JST’s DSB80 – here and here (the original kit version which Richard F5VJDD sent me for reclamation, worked fine) and the ZL2BMI rig, here and here. 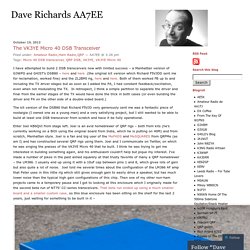 Both of them worked FB up to and including the TX driver stages but as soon as I added the PA, I had constant feedback/oscillation, even when not modulating the TX. In retrospect, I think a simple partition to separate the driver and final from the earlier stages of the TX would have done the trick in both cases (or even building the driver and PA on the other side of a double-sided board.) The kit version of the DSB80 that Richard F5VJD very generously sent me was a fantastic piece of nostalgia (I owned one as a young man) and a very satisfying project, but I still wanted to be able to build at least one DSB transceiver from scratch and have it be fully operational. 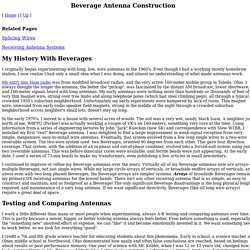 Even though I had a working mostly homebrew station, I now realize I had only a small idea what I was doing, and almost no understanding of what made antennas work. My entry into Ham radio was from modified broadcast radios, and the very active 160-meter mobile group in Toledo, Ohio. In the early 1970's, I moved to a house with several acres of woods. 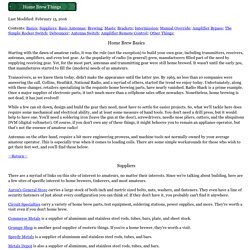 As the popularity of radio (in general) grew, manufacturers filled part of the need by supplying receiving gear. Charlotte D-Star. Moonbouncers.org. VK3UM. VK5DJ: home. Whitebox Handheld Software Radio Kit. LNA for all. Cubical Quad with Dual Feedlines for Multiple Polarizations. By Joe Moell KØOV From my Homing In column in the February 1997 issue of 73 Amateur Radio magazine Cubical quads are popular antennas for VHF and UHF radio direction finding (RDF) in many places around the country, including southern California. 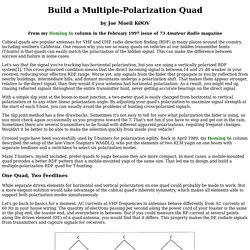 A Portable Reflector System (APRS) Antenna for AO-40. Installed Photo, The above track of AO-40 was during January 2003. By Jan 2004 it will be about 6 degrees below the geostationary arc. During these times, a single adjustment for the offset will last for months. But during times inbetween, the path will cross the arc from below to above or the opposite during each pass. On these days, you may have to re-adjust the offset once after 6 hours or so during a pass. To avoid even this hassle, you can remove some panels from your dish to make the antenna pattern a vertical elipse and then mount the feed at the center of the dish and never have to adjust it for years on end as shown below: Easy, TV rotator (no elevation) tracking system! The APRS Antenna was designed entirely of readily available Home Depot plumbing and electrical fittings and parts. Irrigation Pipe Antenna Mast. BACKGROUND: People have been asking me for the last 20 years to publish the plans for my very lightweight 55 foot portable APRS push up antenna mast.

This mast is made from 3 pieces of abandoned thin-wall irrigation piping that can be obtained for a song from any nursery or farmer. It only weighs 35 pounds and can be held up with one hand. Usually I insert a static 10 foot fiberglass marine mast and 6 foot VHF whip on the top for a total height of about 70 feet. Radio Direction Finding (Radio Foxhunting, Transmitter Hunting, ARDF) for Amateur Radio and Public Service. m0xpd's 'Shack Nasties' 2 Meter Full Wave Loop - The Magic Wand Antenna by WB5ISM. The Magic Wand AntennaA Novel 2 Meter Full Wave Quad LoopByWB5ISMJERRY RANDALL (SK March 12, 2011 - See update below) DON'T LAUGH about this antenna!

Ripley says "Believe it or Not"! The idea for this 2 meter full wave loop antenna came from QST., February, 1973. The design from QST was altered to eliminate instability in matching to a 50 ohm transmission line. The method used to obtain this new design was strictly through experimentation. Learn.adafruit. Assembling an N connector using LMR-240 Ultraflex. WiNRADiO MS-8118/G3 Multichannel Radio Monitoring System. Frequencies from 9 kHz up to 8.6 GHz can be monitored and logged.