Ghana attracts more investor dollars per capita than economic giant Nigeria in West Africa. African startups may prove the exception to a slowdown in funding for tech companies around the world. 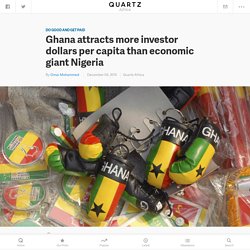 Startups raised $27.3 billion globally, down from 30% from the previous quarter, according to the research firm CB Insights. Last year, startups on the African continent brought in more than $185.7 million, according to a report from Disrupt Africa. And Kenyan startups especially saw their best year in fundraising since 2010. Kenyan startups raised over $47.4 million last year, according to the publication. Companies from Kenya’s so-called “Silicon Savannah” like M-Kopa a solar energy provider for rural areas, Bitpesa a bitcoin trading platform, and Kopo Kopo, a merchant payment system, attracted the bulk of investor attention.

For years, Kenya has been projected to be one of the continent tech leaders, alongside Nigeria and South Africa. That may be slowly happening. West Africa counts economic cost as Ebola outbreak ends. FREETOWN: Gold miner Dauda Kamanda has never been rich, but before Ebola hit Sierra Leone he was getting by selling the nuggets he unearthed to traders who exported them across Africa and the Middle East. 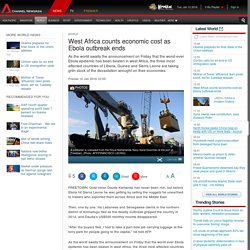 Then, one by one, his Lebanese and Senegalese clients in the northern district of Koinadugu fled as the deadly outbreak gripped the country in 2014, and Dauda's US$500 monthly income disappeared. "After the buyers fled, I had to take a part-time job carrying luggage at the lorry park for people going to the capital," he told AFP. Association "Young African Wake Up" for High Speed Rail In West Africa. West Africa Ends 2015 Declared Ebola-free. West Africa experienced several highs and lows in 2015 in its fight against Ebola. 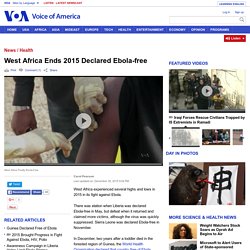 There was elation when Liberia was declared Ebola-free in May, but defeat when it returned and claimed more victims, although the virus was quickly suppressed. Sierra Leone was declared Ebola-free in November. In December, two years after a toddler died in the forested region of Guinea, the World Health Organization declared that country free of Ebola. Dr. West Africa gets cloud-based service from Microsoft and MDX-i. Cattle Man brand may expand to West Africa. Farmers Forum Windhoek. 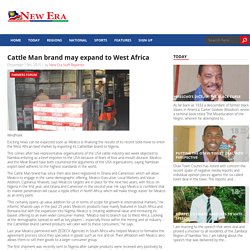 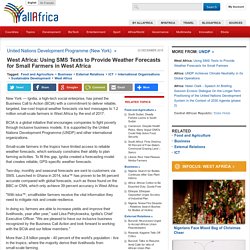 BCtA is a global initiative that encourages companies to fight poverty through inclusive business models. It is supported by the United Nations Development Programme (UNDP) and other international organizations. Small-scale farmers in the tropics have limited access to reliable weather forecasts, which seriously constrains their ability to plan farming activities. To fill this gap, Ignitia created a forecasting model that creates reliable, GPS-specific weather forecasts.

Two-day, monthly and seasonal forecasts are sent to customers via SMS. "With iska™, smallholder farmers receive the vital information they need to mitigate risk and create resilience. About Business Call to Action (BCtA) Economic Irony? Revenue from Ghana's intra- West African trade dips- GAPOHA - Business. The Ghana Ports and Harbours Authority says Ghana is losing significant revenue due to continued drop in transit trade between the country and her West African neighbours. 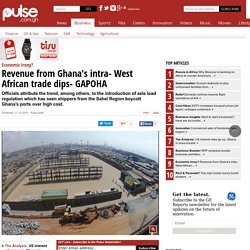 Officials attribute the trend, among others, to the introduction of axle load regulation which has seen shippers from the Sahel Region boycott Ghana’s ports over high cost. Figures from the authority indicate Ghana lost about 50 percent of cargo trade with Burkina Faso, Mali and Niger from one million tons annually since 2009 to 500 thousand tons in 2014. Shippers from the Sahel Region have seven port alternatives to the Ghana option. ECOWAS allows movement of citizens with use of biometric ID cards. The West African Regional bloc ECOWAS has reached a landmark decision for its 15-member states that will allow ease of movement across borders for its citizens with the use of biometric identity cards. 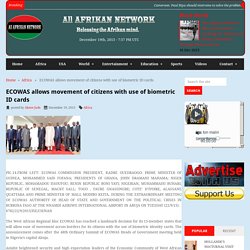 The announcement comes after the 48th Ordinary Summit of ECOWAS Heads of Government meeting held in Nigeria’s capital Abuja. Amidst heightened security and high expectation leaders of the Economic Community of West African States ECOWAS met to discuss their regional challenges and how to mitigate them. Nigerian institutions dominate, Ghana follows as West Africa Awards 2015 are revealed. Banks and financial services groups based in Nigeria and Ghana swept several Awards categories Dubai - 10 December, 2015 More than 4,500 votes were cast across the 29 categories in the Banker Africa West Africa Awards 2015 by the readers of the magazine and the registered users of the financial news website www.cpifinancial.net. 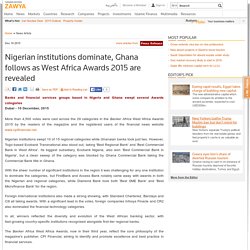 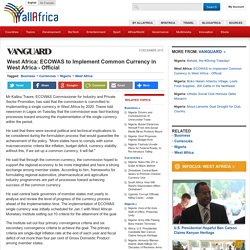 Traore told newsmen in Lagos on Tuesday that the commission was fast-tracking processes toward ensuring the implementation of the single currency within the period. He said that there were several political and technical implications to be considered during the formulation process that would guarantee the achievement of the policy. "More states have to comply with some macroeconomic criteria like inflation, budget deficit, currency stability; without this, if we set up a common currency, it will fail. " He said that through the common currency, the commission hoped to support the regional economy to be more integrated and have a strong exchange among member states. The institute set out four primary convergence criteria and six secondary convergence criteria to achieve the goal.

5 West African countries involved in the construction of highway. West Africa set to build at least six 1 million plus TEU ports over next decade. West African crude exports to Asia to hit five-month high in Dec. Private Equity investments in West Africa continue to rise - Asoko Insight. 02_TransharanPipe_V31.jpg (JPEG Image, 531 × 768 pixels) 8-7-2010InformedeInfraestructurasdeTransportes.pdf. Ghana and Nigeria among world’s fastest growing economies in 2012/2013. The west African nations of Ghana and Nigeria are expected to be among the world’s fastest growing economies in 2012, according to an emailed research note by Charles Robertson, global chief economist at Renaissance Capital. 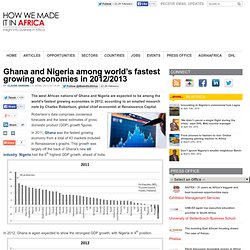 Robertson’s data comprises consensus forecasts and the latest estimates of gross domestic product (GDP) growth figures. In 2011, Ghana was the fastest growing economy from a total of 43 markets included in Renaissance’s graphs. This growth was largely off the back of Ghana’s new oil industry. One million people in West Africa do not have nationalities - UNHCR - Ghana Business News. Statistics released by the United Nations Human Rights for Refugees (UNHCR) indicates that about one million people living in West Africa are Stateless. According to UNHCR estimates, statelessness affected up to 10 million people worldwide leaving them with no identity.

Statelessness refers to the condition whereby an individual is not considered as a national by any State under the operations of its law and is, therefore, not entitled to any right or privileges enjoyed by the nationals. This was disclosed by Madam Emmanuelle Mitte, Senior Regional Protection Officer, UNHCR Country Representation in Senegal, during a two day workshop on Statelessness in West Africa for 27 journalists drawn from the Sub-Region with the exception of Liberia, Sierra Leone and Guinea.

She said about 60 percent of stateless people were children because the States in which they were born did not register them as their parents were not recognized as citizens by the laws of those States. West Africa Energy in 2014. BusinessDay West Africa Energy debuted in January 2014. It recorded immediate acceptance typified by huge response from readers and exclusive partnerships with key industry groups and associations. 2014 on the global terrain was a year filled with industry’s highs and lows; big contract wins, the big exploration finds, dry oil wells, impact of Shale oil boom, newer technologies, dwindling grip of OPEC cartel, ascension of US as dominant global oil player.

Experts laud Nigeria’s stance on Pan- African labour union. Some labour experts in the country have lauded the moves by some African countries, especially Nigeria and Ghana to revive the Organization of Trade Unions of West Africa, OTUWA. OTUWA, like the International Labour Organisation, ILO, is the umbrella labour organisations in West Africa before it went into comatose. President of the Nigeria Labour Congress, NLC, Comrade Ayuba Wabba had noted that such move would contribute to regional integration of the sub-region.

He said the NLC believes that trade unions’ regional solidarity is a possible solution to the continent’s deep and prolonged labour, economic and social crisis. Ghana Agrees to Pay Nigeria U.S.$170 Million Gas Debt - allAfrica.com. By Ejiofor Alike The Ghanaian government has agreed to pay Nigeria a $170 million gas debt by February 2016 in a bid to avert a recent threat by a consortium of Nigerian companies to cut gas supply to Ghana over unpaid gas bill. Ghana receives gas from Nigeria through the $1 billion West African Gas Pipeline (WAGP), which transports Nigerian gas to the Republic of Benin, Togo and Ghana for power generation and other domestic uses.

Maritime piracy costs West Africa $2b yearly – Chief of Naval Staff. Infographic: West African Port Growth: A Vision. Nigeria, Ghana relations will enhance stability in West Africa. Nigeria and Ghana have come a long way. Both countries have had good relations even from the pre-colonial to colonial times. With independence, the relationship was deepened, and although it has always been fraught with tensions, competitions, and sometimes, petty rivalries, it is still as solid as it has ever been and its peoples accept and recognise this.

West Africa: Nigeria, Others Scramble for Airspace in Gulf of Guinea. By David Ogah. Untitled. By Moustapha Diallo Since the failure of last year's harvest, Lamanara Diallo faces a daily struggle to feed his family. Oil majors shelve $200bn in new West Africa projects as low prices bite. The world’s big energy groups have shelved $200bn of spending on new projects in an urgent round of cost-cutting aimed at protecting investors’ dividends as the oil price slumps for a second time this year. More than half the reserves put on hold lie thousands of feet under the sea, including in the Gulf of Mexico and off west Africa, where the technical demands of extracting crude and earlier inflation have pushed up the cost of projects. Deepwater drilling rigs cost hundreds of thousands of dollars a day to hire and these projects could yet proceed if contractors’ costs fall far enough.

West African states prepare MOU on nuclear cooperation. The newly created West African Integrated Nuclear Power Group (WAINPG) prepared a draft memorandum of understanding and three-year action plan at its first meeting, held last week in Niamey, Niger. The heads of delegations from Benin, Burkina Faso, Ghana, Mali, Niger, Nigeria and Senegal will take the MOU document to their respective governments for signature, which will commit them to proceeding with the initial planning for a regional nuclear power program. African countries top list for mobile malware attacks. The rise in the number of new malware attacks aimed at mobile phones continues unabated, and unsurprisingly means that African countries – which are disproportionately “mobile first” compared to the rest of the world – are among those places most regularly targeted.