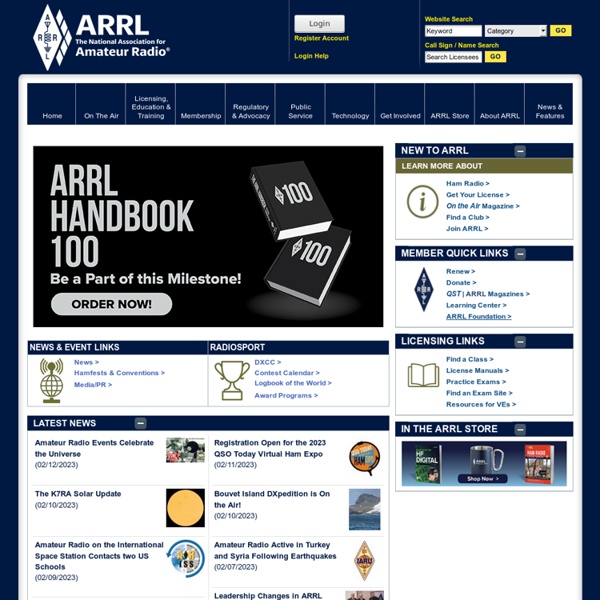 Amateur radio An example of an amateur radio station with four transceivers, amplifiers, and a computer for logging and for digital modes. On the wall are examples of various awards, certificates, and a reception report card (QSL card) from a foreign amateur station. Amateur radio (also called ham radio) is the use of designated radio frequency spectra for purposes of private recreation, non-commercial exchange of messages, wireless experimentation, self-training, and emergency communication. The term "amateur" is used to specify persons interested in radio technique solely with a personal aim and without direct monetary or other similar reward, and to differentiate it from commercial broadcasting, public safety (such as police and fire), or professional two-way radio services (such as maritime, aviation, taxis, etc.). History[edit] An amateur radio station in the United Kingdom.

United States Military Telegraph - Morse Code Files The USMT CW Communicator Ionosphere server! Use our server address of "cw.trwagner.org" in your CW Communicator program! Practice CW, DOT or any version of MorseCode you choose. For DOT Code, please use channel 1863. Teach…Learn…Operate…Support…be part of THE team! Rocky Moun­tain Ham Radio spon­sored com­prehen­sive co­ur­ses in the basics of an­alog re­peat­er con­troll­ers to 21 hams from Col­orado. The class was pre­sen­ted on Feb­rua­ry 22, 2014 by Mr. Dave Maciorowski, WA1JHK, who is a re­peat­er con­troll­er ex­pert from SCOM in Loveland, CO. NOVA Can Wind Turbines Make You Sick? Residents living in the shadows of wind turbines say the sound is making them sick. But so far the science isn't there. From NOVA Next | Jun 27, 2018 Thirty Years Ago Today, Global Warming First Made Headline News On June 23, a NASA climate scientist, James Hansen, told a U.S.

Code Practice Files Text Source for W1AW Web Code Practice Files for April 15 and 16, 2014: Text for the 5 to 15 WPM runs comes from December 2012 QST, page 59. Text for the 20 to 40 WPM runs comes from September 2013 QST, page 49. The various archive files are available from the following links. Access to each other archive is also available from any of these various pages: RFinder Worldwide Repeater Dir Over 50,000 repeaters and growing in 178 countries! RFinder (Repeater Finder), the premier Ham Radio repeater locating tool for Amateur Radio operators, allows you to find repeaters all over the world based on your current location or a specified location. It allows sorting by distance or by Trustee callsign as well as filtering by band and radius in miles or kilometers. *** NOW WITH CALLSIGN LOOKUP! D-STAR INFO IS HERE!

How to Remove Trovi / Conduit / Search Protect Browser Hijack Malware If your computer has been hijacked with an obnoxious malware that won’t let you change your home page, there’s a strong chance you’ve been infected with the Trovi Search Protect malware, which used to be known as Conduit. Here’s how to remove it. How do you know this is malware? Instead of installing like it should, as a Google Chrome Extension, you’ll probably see that your extensions list doesn’t mention Trovi or Conduit at all.

We're sorry..., Social Security You must be able to verify some information about yourself and: Have a valid email address; Have a Social Security number; Have a U.S. mailing address; and Be at least 18 years of age. You can only create an account using your own personal information and for your own exclusive use. You cannot create an account on behalf of another person or using another person's information or identity, even if you have that person's written permission. Earn points for savings on gift cards, name-brand merchandise and more with Rewards for Good SWEEPSTAKES RULES: NO PURCHASE NECESSARY. PURCHASE WILL NOT INCREASE YOUR CHANCES OF WINNING. Open to AARP account holders who are enrolled in the Rewards for Good Program, who are 50 U.S./D.C. residents (excluding Florida), 18 or older at time of entry. See full Official Rules for complete entry details, participating states, deadlines, prizes, and how to enter without obligation.