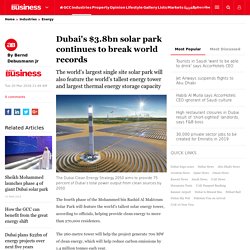 The 260-metre tower will help the project generate 700 MW of clean energy, which will help reduce carbon emissions by 1.4 million tonnes each year. Additionally, the project will also have the world’s largest thermal energy storage capacity. The $3.8 billion (AED 14.2bn) project has achieved the world’s lowest levelised cost of electricity (LCOE), of 7.3 US cents per kilowatt hour (kW/h). KG7TR - Callsign Lookup by QRZ.COM. My handle is Mike and I've been a ham since 1961. 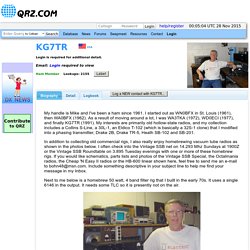 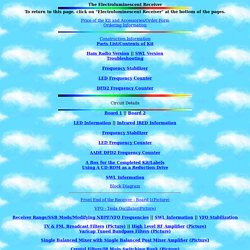 Price of the Kit and Accessories/Order FormOrdering Information. Amateur Radio Receivers. LED diagnosis, large circuit boards, wide traces/pads, and step-by-step instructions make this the easiest double conversion receiver you will ever put together. 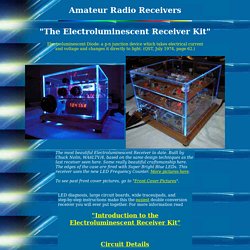 For more information read An CW/SSB receiver that covers the first 100-150 kHz of the 40 and 20 meter bands and all of the 30 and 17 meter bands. Bandwidths can be modified. The tuning range of the VFO is expanded to 500kHz to cover most of the 41/31/19/16 Meter SWL bands. Duncan Watson and Gary Rondeau have sent in modifications they made for improved performance of their receivers. New LED Frequency Counter! Tubes 201 - How Vacuum Tubes Really Work. "Tubes 201" - How Vacuum Tubes Really Work Copyright © 2003, John Harper Back to John's Valve Page Send comments and feedback Everyone knows how a tube works. 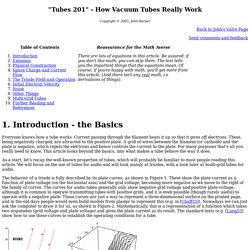 Current passing through the filament heats it up so that it gives off electrons. As a start, let’s recap the well-known properties of tubes, which will probably be familiar to most people reading this article. The behavior of a triode is fully described by its plate curves, as shown in Figure 1. There are other ways to represent the same function. W6JL - Callsign Lookup by QRZ.COM. 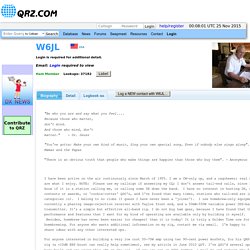 Because those who matter, don't mind. And those who mind, don't matter. " - Dr. Seuss "You've gotta: Make your own kind of music, Sing your own special song, Even if nobody else sings along". - Mamas and the Papas. Articles. WB2MIC Homebrew Monster Transmatch. Some final thoughts. 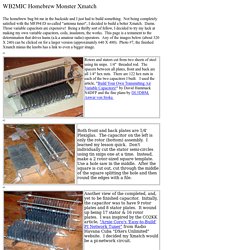 Looking back, I would use the thinner aluminum sheets instead of steel. Aluminum would no be so hard on the hands. The Monster Xmatch has been tested on 40 meters where the 10th tap on the coil and 20% capacitance on both capacitors provides maximum power transfer with 1:1 match for the transmitter. The Monster Xmatch works very well and unlike the MFJ941D the settings do not require readjusting during longer transmission as a result of heating low grade components. The Monster Xmatch total construction cost was $44.20 which includes the cost of a pair of good quality circular tin snips.

How to build a Tilt Over Tower. Custom Search (c) M. 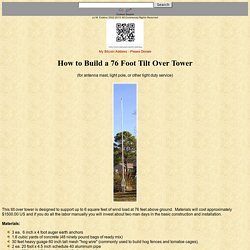 Jim Wilson. I retired as Director of Communication Services at the national office of the Boy Scouts of America in 2013. 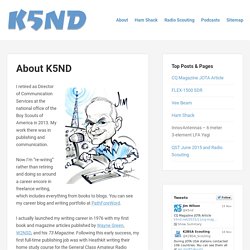 My work there was in publishing and communication. Now I’m “re-wiring” rather than retiring and doing so around a career encore in freelance writing, which includes everything from books to blogs. You can see my career blog and writing portfolio at PathForeWord. I actually launched my writing career in 1976 with my first book and magazine articles published by Wayne Green, W2NSD, and his 73 Magazine. KD6WD'S Moxon Antenna Project. Dave Richards AA7EE. Manhattan construction. EDIT (July 26th 2014) – If you’re thinking of building the WBR, I strongly suggest you check out my most recent build here, which incorporates a mod suggested by LA3PNA, and a different configuration for the AF amp that I think provides nicer sounding audio. 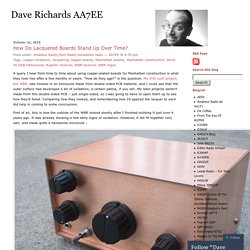 The full schematic is published there also. A few weeks ago when a sizable order of parts arrived from Dan’s Small Parts And Kits, the plan was to use them (along with the parts from a few smaller orders from kitsandparts.com and Mouser) as the basis for some fun home-brew projects. I got my feet wet by building some small circuits Manhattan style – an audio filter and RF preamp for my VRX-1 DC receiver, and a crystal oscillator in an Altoids tin to check out the MeSQUARES I had just received from QRPMe. These are detailed in recent posts. Like anyone who builds circuits, I have a mental list of things that I’d like to build which is updated constantly. One or two people have asked me how I cut PCB material. The completed circuit. VE7CNF_MFTransmitter. Toby Haynes November, 2015 1 Contents VE7CNF – 630m Transmitter. 1 Transmitter Breadboard. 1 Digital Direct Synthesizer. 3. VE7CNF_AntMatch630m. IN3OTD's Home Page. News: August, 2015:Updated the wideband bias tee page with more measurements and some improvements to the previous design.

January, 2015:A new QRP power amplifier, a Class-A design by WA2EUJ, covering the HF plus the 50 MHz band.A GPIB disk emulator using a PIC and an SD card to allow old equipment storing data on a modern media. December, 2014:Added description of the recently built low-distortion HF push-pull amplifiers and measurements on a high-IP3 HF preamplifier. June, 2014:Updated the VNA calibration kit pages, with a new SMA male calkit and a new 50Ω load in the SMA female calkit page. June, 2014:Added new LTspice models for the RD06HHF1 and RD16HHF1 LDMOS. E-field Probe Antenna - G3XBM QRP WEBSITE. Recently I have been trying out a small active voltage probe antenna to aid reception on the LF bands. I used a PA0RDT designed active antenna (but with MPF102 and 2N3904 devices and a 9V supply from a PP3 battery) to listen successfully to amateur signals on both 500kHz and 136kHz.

The probe is also suitable for listening on the 33kms "Dreamers Band" (8.97kHz). It is recommended that the active antenna should be mounted well in the clear and away from the house feeding the power up the coax). This is to avoid noise pick-up from mains wiring, switched mode PSUs and TV line timebases. However, I just stuck mine onto the inside of my double glazed window - it still worked and heard stations on both LF bands. It works because the FET has a very high input impedance. LF Converter - Ham Radio Kits. Ham Radio KITS - TOP PAGE - Washington Island BOOKS LF Converter kit 12/27/2013 New manual / schematic, new balun cores used for inductors 05/06/2012 - 530 kHz lowpass filter components now included select either the LF Convert kit alone OR the LF Converter with the extra filter components , then press the add to cart button There is some corrosion on the board plating, it is unsightly but doesn't affect performance.

Datalogging with Spark Core + Google Drive. The Alaska QRP Club. CWTD - April 28, 2015. April 28, 2015 Elmer 101 with the Small Wonder Labs SW30+ Transceiver Understand the basics of this classic monoband superhet ... and build up the kit here with us all in successive episodes of CWTD! CWTD - Sep 8, 2015. October 13, 2015 CWTD Episode #75 GPS Topics The Continuing Adventures in GPS Data Display, Oscillator Timing and Temperature Control 1) Our approach thus far with the OCXO Project Full information on the "special kit" that Hans is supplying for us is at ...

This DIY Adventure Truck Is A Must-Have For Any Traveler. Or Anyone Else. (BUG OUT VEHICLE ! DB. 12/08/2014) we can call this the : get out of dodg… MP-X Seat Back MOLLE Panel. This is for the MPX MOLLE Panel ONLY Almost infinitely adjustable and therefore truly universalFunction in both a horizontal and a vertical planeMultitasking capabilities….while the MP-X is designed for vehicles, it will be capable of many other scenarios that may require a MOLLE Panel.When properly used, it will not interfere with driver or safety devicesQuickly detaches and can rapidly be converted for other duties.Sturdy and compatible with virtually all types of MOLLE gearFirm yet flexible inner panel so that the MOLLE Panel will not sag when fully loadedConsidering the infinite potential applications and the low price….this is probably the single best value in MOLLE products ever offered.