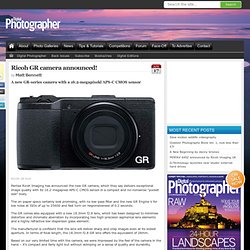 The on-paper specs certainly look promising, with no low-pass filter and the new GR Engine V for low noise at ISOs of up to 25600 and fast turn-on responsiveness of 0.2 seconds. The GR comes also equipped with a new 18.3mm f2.8 lens, which has been designed to minimise distortion and chromatic aberration by incorporating two high-precision aspherical lens elements and a highly refractive low-dispersion glass element. The manufacturer is confident that the lens will deliver sharp and crisp images even at its widest aperture. In terms of focal length, the 18.3mm f2.8 GR lens offers the equivalent of 28mm. Based on our very limited time with the camera, we were impressed by the feel of the camera in the hand – it’s compact and fairly light but without skimping on a sense of quality and durability. Our. 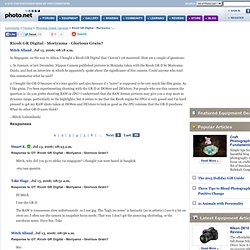 In Singapore, on the way to Africa, I bought a Ricoh GR Digital that I haven't yet mastered. Here are a couple of questions: 1. In January or last December, Nippon Camera published pictures in Shinjuku taken with the Ricoh GR-D by Moriyama Daido, and had an interview in which he apparently spoke about the siginficance of this camera. Could anyone who read this summarize what he said? 2. 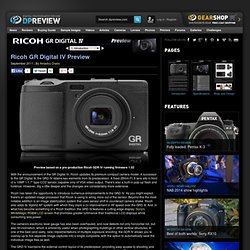 A successor to the GR Digital III, the GRD IV retains key elements from its predecessor. A fixed 28mm F1.9 lens sits in front of a 10MP 1/1.7" type CCD sensor, capable only of VGA video output. There's also a built-in pop-up flash and hotshoe. However, dig a little deeper and the changes are considerably more extensive. Ricoh has taken the opportunity to introduce numerous enhancements to the GRD IV. The camera's electronic level gauge has also been overhauled, and now detects not only horizontal roll, but also tilt inclination, which is eminently useful when photographing buildings or other vertical structures. The GRD IV maintains the external control layout of its predecessor, providing easy access to shooting and exposure parameters without having to change your grip from the shooting position. 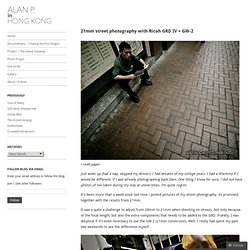 I had dreams of my college years. I had a dilemma if I would be different, if I was already photographing back then. One thing I know for sure, I did not have photos of me taken during my stay at universities. I’m quite regret. It’s been more than a week since last time i posted pictures of my street photography. It was a quite a challenge to adjust from 28mm to 21mm when shooting on streets. I carry goods I have nothing against the original 28mm GR lens. Newstand owner: What I sell is bad for you, read book instead. When shooting on the first weekend, I was mainly framing thru my OVF. Personal gaming station In my second weekend, I felt I wasn’t pressured to shoot. Indulgence World stops with ipad and cigarette “Where you at?” U eat, I eat.