What is Anarcho-Capitalism? - subMedia.tv subMedia.tv. Dog GIF. _nlhixqv8iQ1tcybooo1_400. Richest 62 billionaires as wealthy as half the world population combined. Meet The 80 People Who Are As Rich As Half The World. Rich People 7:01 PM Jan 18, 2015 By Mona Chalabi Prince Al-Waleed bin Talal Bin Abdulaziz Alsaud, right, nephew of King Abdullah of Saudi Arabia, and his wife, Princess Amira, left, arrivel in Mogadishu, Somalia, to witness the famine in the Somali capital on Aug. 27, 2011. 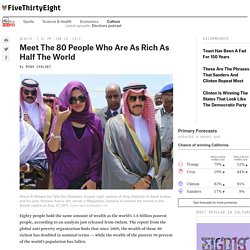 Farah Abdi Warsameh / AP Eighty people hold the same amount of wealth as the world’s 3.6 billion poorest people, according to an analysis just released from Oxfam. The report from the global anti-poverty organization finds that since 2009, the wealth of those 80 richest has doubled in nominal terms — while the wealth of the poorest 50 percent of the world’s population has fallen. To see how much wealth the richest 1 percent and the poorest 50 percent hold, Oxfam used research from Credit Suisse, a Swiss financial services company, and Forbes’s annual billionaires list. Four years earlier, 388 billionaires together held as much wealth as the poorest 50 percent of the world.

Source: Forbes, Oxfam. Rosa Luxemburg Explains Capitalism Using Spoons. Animated GIF. New Princeton Study Confirms U.S. Is No Longer A Democracy, Is Now An Oligarchy. 82.0K Shares Share Tweet Email It’s become clear over the past few decades that the democracy that our nation was founded on and that our citizens hold so dear is on life support. 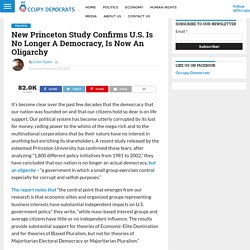 Our political system has become utterly corrupted by its lust for money, ceding power to the whims of the mega-rich and to the multinational corporations that by their nature have no interest in anything but enriching its shareholders. The report notes that “the central point that emerges from our research is that economic elites and organized groups representing business interests have substantial independent impacts on U.S. government policy,” they write, “while mass-based interest groups and average citizens have little or no independent influence. The IMF Confirms That 'Trickle-Down' Economics Is, Indeed, a Joke. "Trickle-down" economics began as a joke. 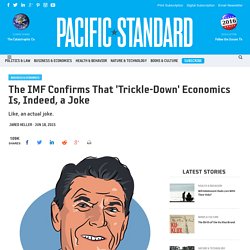 Seriously. If there’s one person most often associated with the origins of of trickle-down economics, it’s President Ronald Reagan. Few people know, however, that the phrase was actually coined by American humorist Will Rogers, who mocked President Herbert Hoover’s Depression-era recovery efforts, saying that "money was all appropriated for the top in the hopes it would trickle down to the needy. " Rogers’ joke became economic dogma within two generations, thanks in large part to Reagan.

At the center of Reagan’s economic doctrine was the idea that economic gains primarily benefiting the wealthy—investors, businesses, entrepreneurs, and the like—will "trickle-down" to poorer members of society, creating new opportunities for the economically disadvantaged to attain a better standard of living. Increasing the income share to the bottom 20 percent of citizens by a mere one percent results in a 0.38 percentage point jump in GDP growth. None of the Tech in Your iPhone Would Exist Without Socialism. The Real Terrorists: The .01% They consist of 16,000 individuals, about the size of a crowd at a professional basketball game. 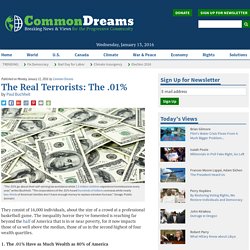 The inequality horror they've fomented is reaching far beyond the half of America that is in or near poverty, for it now impacts those of us well above the median, those of us in the second highest of four wealth quartiles. 1. The .01% Have as Much Wealth as 80% of America The combined net worth of the 16,000 richest Americans is approximately the same as the total wealth of 256,000,000 people. Details for this statistic and other facts to follow are at You Deserve Facts. 2.

Americans with up to a Quarter-Million Dollars are Part of the Nearly 80% of Americans with Less Wealth Than the .01% The 80% includes all Americans with a net worth up to about $277,000. 3. In Class Warfare, Guess Which Class Is Winning.