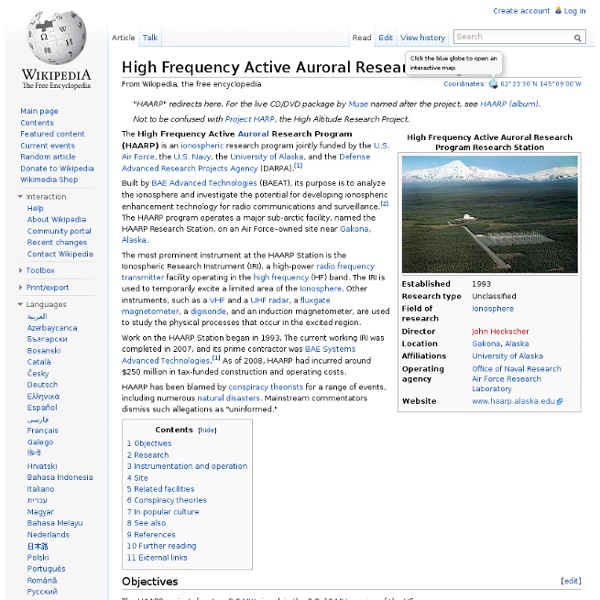 The most prominent instrument at the HAARP Station is the Ionospheric Research Instrument (IRI), a high-power radio frequency transmitter facility operating in the high frequency (HF) band. The IRI is used to temporarily excite a limited area of the Ionosphere. Other instruments, such as a VHF and a UHF radar, a fluxgate magnetometer, a digisonde (an ionospheric sounding device), and an induction magnetometer, are used to study the physical processes that occur in the excited region. Work on the HAARP Station began in 1993. HAARP is a target of conspiracy theorists, who claim that it is capable of modifying weather, disabling satellites and exerting mind control over people, and that it is being used as a weapon against terrorists. Overview[edit] HAARP antenna array The HAARP project directs a 3.6 MW signal, in the 2.8–10 MHz region of the HF (high-frequency) band, into the ionosphere. The HAARP program began in 1990. Research[edit] Some of the main scientific findings from HAARP include Related:  Metro

HAARP BBC COMPLAINT WHY NO COVERAGE RE CLIMATE CHANGE Facebook, Groupon: Is The Next Tech Bubble Social? Many of the hallmarks of the 2000 dot-com bubble seem to be present again, what with Goldman Sachs' interest in Facebook, the mind-boggling valuations of Groupon and Living Social, and the growth of the mobile app industry. For insight, host Liane Hansen talks with Beverly Macy, CEO of Gravity Summit, author of The Power of Real-Time Social Media Marketing and a distinguished instructor at UCLA Extension. Copyright © 2011 NPR. For personal, noncommercial use only. LIANE HANSEN, host: Call it yet another sign of Facebook's dominance in the social media world. The collapse of MySpace comes at a pivotal time in the dotcom world. Industry watchers say another investment bubble could be brewing, much like the one that gave way to the dotcom bust at the beginning of this century. For insight, we've invited Beverly Macy to our studios here in Washington, D.C. Ms. HANSEN: Let's begin with the MySpace news. Ms. Will we see it totally die out? Ms. But businesses are also looking at this. Ms. Ms.

Information Security, IT, and Network Support Helpdesk | The 12 Immutable Laws of Information and Computer Security - SCWOA - Information Security, IT, and Network Support Helpdesk As active technology security professionals, we regularly deal with a variety security issues that arise from various causes. While sometimes these security breaches are due to a product flaw – more often than not the real reason for a security breach comes from natural human error, or a lack of knowledge about good security practices (note: this isn’t an intelligence thing, it’s really more a perspective thing). Something we have noticed over the years is that we find certain commonalities among the causes of these security issues. Accordingly (and with a little inspiration from Microsoft) we’ve put together a pretty solid list of important security concepts that people really should keep in mind at all times. So here are the 12 things you should always keep in mind when thinking about your computer / information security. 1. This concept strikes at the very heart of computer science, because it is not the technology that is at fault – but how the technology is being used. 2. 3. 4. 5.

Chemtrail A high-flying jet leaving a condensation trail (contrail) According to the chemtrail conspiracy theory, some trails left in the sky by high-flying aircraft are chemical or biological agents deliberately sprayed for sinister purposes undisclosed to the general public.[1] Believers in the theory argue that airplanes don't leave long-lasting contrails under normal conditions,[2] but their arguments have been dismissed by the scientific community: such trails are simply normal water-based contrails (condensation trails) which are routinely left by high-flying aircraft under certain atmospheric conditions.[3] Although proponents have attempted to prove that the claimed chemical spraying does take place, their analyses have been flawed or based on misconception.[4][5] Overview Multiple persistent contrails Contrails as chemtrails Contrails from propeller-driven aircraft engine exhaust, early 1940s Exhaust gases and emissions False evidence of chemtrails Ballast barrels in a prototype Boeing 747.

Umvolkung word BANNED Harmful Drugs Persist in French Medical System | World By Aurelien Girard Epoch Times Staff Created: January 5, 2011 Last Updated: January 5, 2011 The headquarters of France pharmaceutiacal company Servier, in Neuilly Sur Seine. (Francios Guillott/Getty Images) PARIS—French health authorities are battling public opinion with explanations of why several drugs, with adverse effects long reported by medical experts, have remained on the market for years, and have even been subsidized by the national health insurance system. Following November’s revelations that Mediator, a top drug of Servier (the largest independent French pharmaceutical company), could have been responsible for as many as 2,000 deaths, controversy broke out concerning the inefficiency of French regulatory bodies. Indeed, the first reports of serious adverse effects of Mediator, a diabetes drug also used as a diet pill, date back to 1997. Other Drugs Accused

Isaac Asimov's 1964 Predictions About 2014 Are Frighteningly Accurate Interior photos of chemtrails planes??? | Enouranois English-Language Forum This is getting back to an old subject, but I remember some years ago there were discussions about whether photos such as the one you see here are photos of the interior of a chemtrails spraying plane. The story we accepted was that in fact the barrels are filled with water and these planes are used for testing the stability of the aircraft in flight. www.facebook.com/photo.php? An activist here in Greece did some research on the markings to be seen on one of the barrels in this aircraft and determined that the code GSY-11213 belongs to a big American research company that carries out experiments related to geoengineering and HAARP. How can we crosscheck this??? Reply from Holmestead: I have always taken this - and similar reports - to be load testing of large passenger aircraft. Re GSY - a simple search provides this: www.google.ca/search? www.godlikeproductions.com/forum1/message1288044/pg5 On the barrels I could see GSY 1 1 213 - SO, which I looked up and had no luck.

The Occult Roots Of NASA And The Ongoing Fraud – SAVAGE PLANE This post has been cobbled together from a number of places as the original Website is no longer available. I wanted to recreate this article by The Modern Gnostic because I found it a valuable resource to direct people to when explaining the glorious roots of The Church of NASA. Enjoy! The Modern Gnostic In my lexicon, NASA stands for: Never A Straight Answer. But to be quite frank, it pisses me off more that NASA has built up a money-sucking colossus composed of lies, hoaxes and misinformation. The focus of this first part of a series is based on a principle that is indefensible if you are caught. In short, once fraud is detected everything that sits upon it is now in question. To further muddy the waters, NASA was founded by Satanic worshiping occultists and black magicians. Fraud #1 Pre-NASA The predecessor to NASA was a young talented rocket scientist, Jack Parsons. [1]Jack’s childhood was one of solitude, loneliness, and wealth. The Suicide Squad Jack Parsons FBI 1 Jack Parsons FBI 2

Tunis gun battles erupt after Ben Ali aide arrested 16 January 2011Last updated at 21:04 A curfew is still in place in Tunisia Tunisian forces are exchanging fire near the presidential palace with members of deposed President Zine al-Abidine Ben Ali's guard, reports say. Witnesses reported heavy gunfire in Carthage, north of the capital Tunis, where the palace is located. It comes after the ex-head of presidential security, Ali Seriati, was arrested and accused of threatening state security by fomenting violence. Meanwhile, political leaders are holding talks about a new government. Interim leader Foued Mebazaa, who until Saturday was the speaker of parliament, has asked Prime Minister Mohammed Ghannouchi to form a government of national unity. In a national TV address, Mr Ghannouchi said an agreement between the political parties would be announced on Monday. The announcement of Mr Seriati's arrest on Sunday came after the previous day saw widespread violence across Tunisia, including looting, arson and deadly jail riots. 'Intensive' gunfire

Physicists Find Evidence That The Universe Is A 'Giant Brain' The idea of the universe as a 'giant brain' has been proposed by scientists - and science fiction writers - for decades. But now physicists say there may be some evidence that it's actually true. In a sense. According to a study published in Nature's Scientific Reports, the universe may be growing in the same way as a giant brain - with the electrical firing between brain cells 'mirrored' by the shape of expanding galaxies. The results of a computer simulation suggest that "natural growth dynamics" - the way that systems evolve - are the same for different kinds of networks - whether it's the internet, the human brain or the universe as a whole. A co-author of the study, Dmitri Krioukov from the University of California San Diego, said that while such systems appear very different, they have evolved in very similar ways. The result, they argue, is that the universe really does grow like a brain. The study raises profound questions about how the universe works, Krioukov said. Related Posts