This incredibly detailed map of Africa could help aid and development. Can a map save lives? 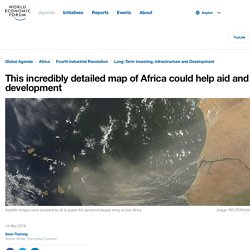 Facebook thinks so. Using satellite photos and artificial intelligence (AI), the company has created a high-resolution map of population density in Africa that it says is more detailed than any of its predecessors. To create the map, publicly available images were broken up into billions of 30-by-30-metre sections, and each was analysed to assess how many people might live there. Facebook says it eventually wants to map the whole world’s population. Image: Facebook There are more than a billion people across Africa and population densities vary by region and country. That means hundreds of millions of people live in rural, sometimes remote, locations. The project mapped hundreds of millions of buildings to find where people live. 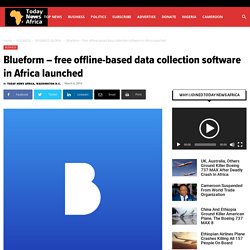 The software removes all technical barriers to data collection, management and analysis for social development projects, monitoring and evaluation, market survey and research. “Data collection in Nigeria and the rest of Africa is very important for social development, disease surveillance, market analysis and every decision making,” said Tochukwu Egesi, Chief Executive Officer and Co-founder, Innovation Corner. This Self-Taught Cameroonian Techie Is Solving Africa's Unemployment Crisis - And He Started From His Bedroom!

Typically clad in simple jeans and T-shirt – which actually constitutes something of a signature look – there’s some sort of boyish demeanor and laid back aura about Cameroonian techie, Mambe Churchill Nanje, which belies his 33 years of age and clout in his country’s tech space. 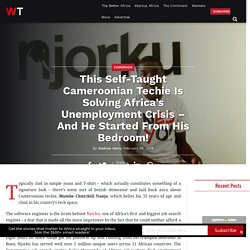 The software engineer is the brain behind Njorku; one of Africa’s first and biggest job search engines – a feat that is made all the more impressive by the fact that he could neither afford a computer nor internet when he first started out. Eight years on since Nanje got his platform up and running from his cramped bedroom in Buea, Njorku has served well over 2 million unique users across 11 African countries. Gene-edited animal plan to relieve poverty in Africa. Image copyright BBC News A researcher in Edinburgh is leading efforts to develop gene-edited farm animals for poor farmers in Africa. 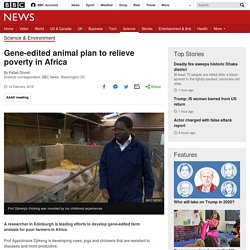 Prof Appolinaire Djikeng is developing cows, pigs and chickens that are resistant to diseases and more productive. Among them are cattle that have been gene edited to be heat-resistant. Details of the project were given at the American Association for the Advancement of Science meeting in Washington DC. Prof Djikeng is the director of the Centre for Tropical Livestock Genetics and Health. 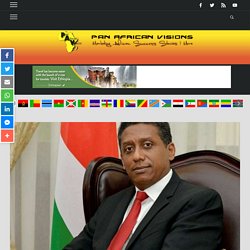 The bond, which raised US$15 million from international investors, demonstrates the potential for countries to harness capital markets for financing the sustainable use of marine resources. The World Bank assisted in developing the blue bond and reaching out to the three investors: Calvert Impact Capital, Nuveen, and Prudential. “We are honored to be the first nation to pioneer such a novel financing instrument. Proceeds from the bond will include support for the expansion of marine protected areas, improved governance of priority fisheries and the development of the Seychelles’ blue economy. 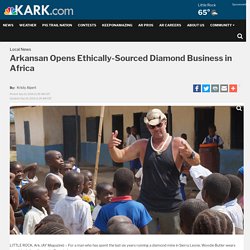 All rights reserved. This material may not be published, broadcast, rewritten, or redistributed. LITTLE ROCK, Ark. (AY Magazine) -- For a man who has spent the last six years running a diamond mine in Sierra Leone, Woodie Butler wears surprisingly few diamonds. Massive solar and wind farms could bring vegetation back to the Sahara. Switching from fossil fuels to renewable energy is an important and necessary step towards averting climate change. 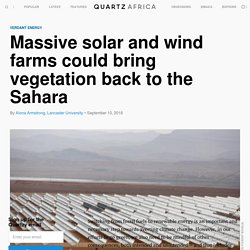 However, in our efforts to go green, we also need to be mindful of other consequences, both intended and unintended – and that includes how a mass deployment of renewable technology might affect its surrounding climate. What if the Sahara desert was turned into a giant solar and wind farm, for instance? This is the topic of new research published in Science by Yan Li and colleagues. They found that all those hypothetical wind turbines and solar panels would make their immediate surroundings both warmer and rainier, and could turn parts of the Sahara green for the first time in at least 4,500 years. The scientists behind the research looked at the maximum amount of solar and wind energy that could be generated in the Sahara desert and the transition region to its south, the Sahel.

Why turbines and panels mean warmth and rain More rainfall also means more vegetation. Africa's unsung scientists finally get their own journal to spread research. A new journal to showcase Africa’s often-overlooked scientific research has been launched to give the continent’s scientists better global recognition. 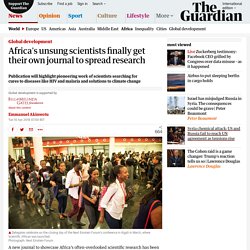 Scientific African will be the first “mega-journal” in Africa. It was unveiled in Kigali last week at Africa’s biggest science conference, the Next Einstein Forum (NEF) conference, and the first issue is scheduled to be published at the end of the summer. Its editor, Dr Benjamin Gyampoh, said the journal would address the problem of African scientists going unrecognised for pioneering work because they lacked access to quality publications. “There are many reputable journals but there is a low number of Africans publishing in them partly because the costs are so high,” Gyampoh said. Africa's newest tech hubs are in Senegal, Ghana, Côte d’Ivoire, Zimbabwe, Uganda. If you need evidence of the US retail sector’s precarious condition, consider that more than 9,000 stores closed last year, and another 12,000 are on the chopping block this year, according to commercial property firm Cushman & Wakefield. 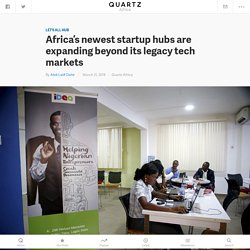 Despite a 4.2% rise in 2017 over the previous year, US retail growth is lumpy and clearly not firing on all cylinders. Every week brings gloomy news of bankruptcies or downsizings. Online sales, meanwhile, have been climbing, underpinning the sector’s overall growth. US retail is at a crossroads, with brands and retailers still trying to decide whether e-commerce is friend or foe. Meet Liamara Caesar, Who Is Creating A Fashion 'Alibaba For Africa' With Manufacture 4 Me. Sierra Leone elections powered by blockchain. Today, about 300,000 children are born with sickle cell anaemia every year, with that number expected to rise to 400,000 in the next 30 years. 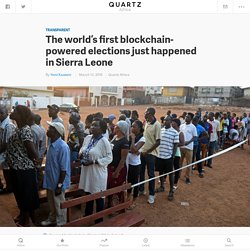 The majority of these cases occur in Nigeria, the Democratic Republic of Congo, and India, and many of these babies are likely to die from the disease in which their red blood cells break apart, leaving their bodies starved of oxygen. It is caused by two copies of a gene mutation in their DNA. One copy is harmless; two copies can be deadly. Millions of people worldwide, frequently those with African heritage, are carriers of this mutant gene, but there are large gaps in our knowledge of the disease and its characteristic mutations. Africa’s lone female head of state is under pressure to resign over alleged financial scandal. Mauritian President Ameenah Gurib-Fakim, seen here in 2015, is under pressure to resign after being implicated in a financial scandal. (Karel Prinsloo/AFP/Getty Images) The president of Mauritius is apparently being forced out of office over allegations that she used a charity's credit card to make excessive purchases for herself.

Ameenah Gurib-Fakin is currently the only female head of state among 55 nations that comprise the African Union. Africa's giant SKA telescope project in South Africa, Ghana, Botswana, Zambia, Kenya and others. Lubumbashi, DR Congo Positioning a stand at the entrance to one of Lubumbashi’s largest breweries is part entrepreneurial savvy, part defiance by Mwehu Kashala. Each day he sells mobile phone airtime vouchers under a large umbrella, displaying the disposable vouchers on a rickety table. It’s been his main source of income since he lost his job a decade ago from the textile factory that used to operate from the same large industrial complex that is now a brewery. Africa's basic education can be reinvented by digital technology, finds France development/Orange study.

On Nov. 21, Zimbabwean president Robert Mugabe resigned as president under intense pressure from the military, his own party, and mass protests. The news was celebrated on the streets of Harare and also by pro-democracy activists across the continent. But in Uganda, president Yoweri Museveni—who has been in power for almost 30 years – clings on, plotting to change the constitution so that he can stand in the 2021 elections. So how long can he stay in power? Desire for knowledge  Langaa and publishing in Africa. Can enhanced circulation of African worldviews help shape the evolution of humanity? This is our vision at Langaa Research and Publishing Common Initiative Group which, along with other African publishers, stirs the imagination and contributes to cultural development and renaissance.

African scientists are starting to benefit from big data analysis — Quartz. By increasing the volume of data that researchers can analyze and work with at any given time, data-intensive technology allows them to make bigger strides in less time in their chosen disciplines. Data scientists assist this process by providing the skills to help researchers and managers first analyze large volumes of data and then use that analysis to make effective decisions. An Old Satellite Dish Found on Google Maps Is Becoming West Africa's First Radio Telescope. Ethiopia aims to become Africa's biggest manufacturing hub.