Queen Victoria. Alexandrina Victoria, the only child of Edward, Duke of Kent and Victoria Maria Louisa of Saxe-Coburg, was born in 24th May 1819. 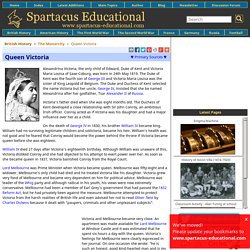 The Duke of Kent was the fourth son of George III and Victoria Maria Louisa was the sister of King Leopold of Belgium. The Duke and Duchess of Kent selected the name Victoria but her uncle, George IV, insisted that she be named Alexandrina after her godfather, Tsar Alexander II of Russia. Victoria's father died when she was eight months old. The Duchess of Kent developed a close relationship with Sir John Conroy, an ambitious Irish officer. Conroy acted as if Victoria was his daughter and had a major influence over her as a child. 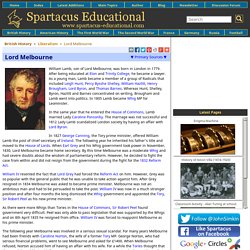 After being educated at Eton and Trinity College, he became a lawyer. As a young man, Lamb became a member of a group of Radicals that included Leigh Hunt, Percy Bysshe Shelley, William Hazlitt, Henry Brougham, Lord Byron, and Thomas Barnes. Whereas Hunt, Shelley, Byron, Hazlitt and Barnes concentrated on writing, Brougham and Lamb went into politics. In 1805 Lamb became Whig MP for Leominster. Robert Peel. Robert Peel was born in Bury, Lancashire, on 5th February, 1788. 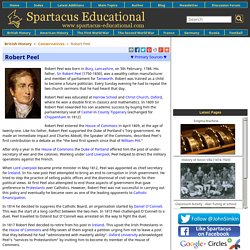 His father, Sir Robert Peel (1750-1830), was a wealthy cotton manufacturer and member of parliament for Tamworth. Robert was trained as a child to become a future politician. Every Sunday evening he had to repeat the two church sermons that he had heard that day. Robert Peel was educated at Harrow School and Christ Church, Oxford, where he won a double first in classics and mathematics. In 1809 Sir Robert Peel rewarded his son academic success by buying him the parliamentary seat of Cashel in County Tipperary (exchanged for Chippenham in 1812). 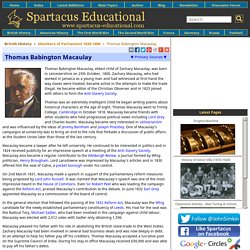 Zachary Macaulay, who had worked in Jamaica as a young man and had witnessed at first-hand the way slaves were treated, became active in the attempts to make the trade illegal. He became editor of the Christian Observer and in 1823 joined with others to form the Anti-Slavery Society. Thomas was an extremely intelligent child he began writing poems about historical characters at the age of eight. Thomas Macaulay went to Trinity College, Cambridge in October 1818. Macaulay became friends with other students who held progressive political views including Lord Grey and Charles Austin.

Macaulay became a lawyer after he left university. On 2nd March 1831, Macaulay made a speech in support of the parliamentary reform measures being proposed by Lord John Russell. Macaulay pleased his father with his role in abolishing the British slave-trade in the West Indies. Chartism. Chartism was a working-class movement for political reform in Britain which existed from 1838 to 1858. 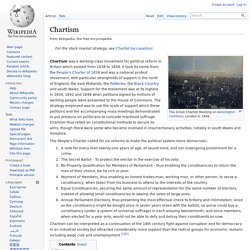 It took its name from the People's Charter of 1838 and was a national protest movement, with particular strongholds of support in the north of England, the east Midlands, the Potteries, the Black Country and south Wales. Support for the movement was at its highest in 1839, 1842 and 1848 when petitions signed by millions of working people were presented to the House of Commons. The strategy employed was to use the scale of support which these petitions and the accompanying mass meetings demonstrated to put pressure on politicians to concede manhood suffrage.

Chartism thus relied on constitutional methods to secure its aims, though there were some who became involved in insurrectionary activities, notably in south Wales and Yorkshire. The People's Charter called for six reforms to make the political system more democratic: Origin[edit] Press[edit] William Lovett. William Lovett, the son of the captain of a small fishing vessel, was born in Penzance, Cornwall on 8th May, 1800. 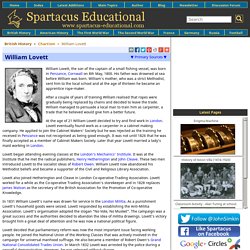 His father was drowned at sea before William was born. William's mother, who was a strict Methodist, sent him to the local school and at the age of thirteen he became an apprentice rope-maker. After a couple of years of training William realised that ropes were gradually being replaced by chains and decided to leave the trade. William managed to persuade a local man to train him as carpenter, a trade that he believed would give him a better future. At the age of 21 William Lovett decided to try and find work in London. Lovett began attending evening classes at the London's Mechanics' Institute.

Lovett also joined Hetherington and Cleave in London Co-operative Trading Association. In 1831 William Lovett's name was drawn for service in the London Militia. Lovett decided that parliamentary reform was now the most important issue facing working people. R. The Project Gutenberg eBook of Rural Rides, by William Cobbett. 1832 Reform Act. Between 1770 and 1830, the Tories were the dominant force in the House of Commons. 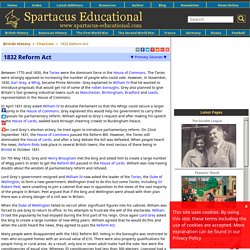 The Tories were strongly opposed to increasing the number of people who could vote. However, in November, 1830, Earl Grey, a Whig, became Prime Minister. Grey explained to William IV that he wanted to introduce proposals that would get rid of some of the rotten boroughs. Peterloo Massacre. In March 1819, Joseph Johnson, John Knight and James Wroe formed the Manchester Patriotic Union Society. 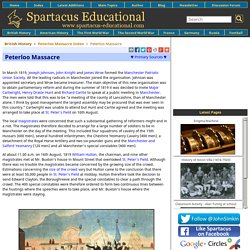 All the leading radicals in Manchester joined the organisation. Johnson was appointed secretary and Wroe became treasurer. The main objective of this new organisation was to obtain parliamentary reform and during the summer of 1819 it was decided to invite Major Cartwright, Henry Orator Hunt and Richard Carlile to speak at a public meeting in Manchester. Rotten Borough. A rotten borough was a parliamentary constituencies that had declined in size but still had the right to elect members of the House of Commons. 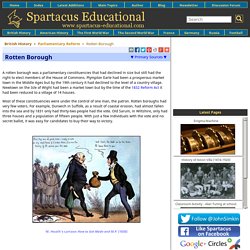 Plympton Earle had been a prosperous market town in the Middle Ages but by the 19th century it had declined to the level of a country village. Newtown on the Isle of Wight had been a market town but by the time of the 1832 Reform Act it had been reduced to a village of 14 houses. Most of these constituencies were under the control of one man, the patron. Rotten boroughs had very few voters. William Cobbett.

William Cobbett. Early life and military career: 1763–1791[edit] William Cobbett's birthplace William Cobbett was born in Farnham, Surrey, on 9 March 1763, the third son of George Cobbett (a farmer and publican) and Anne Vincent.[1] He was taught to read and write by his father, and first worked as a farm labourer at Farnham Castle. 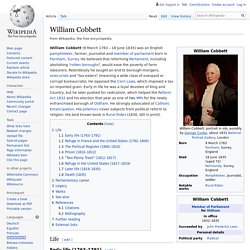 He also worked briefly as a gardener at Kew in the King's garden.[2] He returned to England with his regiment, landing at Portsmouth 3 November 1791, and obtained discharge from the army on 19 December 1791. In Woolwich in February 1792, he married Anne Reid, whom he had met while stationed at Fort Howe in Saint John. France and the United States: 1792–1800[edit] Thomas Carlyle. Thomas Carlyle (4 December 1795 – 5 February 1881) was a Scottish philosopher, satirical writer, essayist, historian and teacher.[1] Considered one of the most important social commentators of its time, he presented many lectures during his lifetime with certain acclaim in the Victorian era. On Heroes, Hero-worship, and the Heroic in History, by Thomas Carlyle. Robert Owen. Robert Marcus Owen (/ˈoʊən/; 14 May 1771 – 17 November 1858) was a Welsh social reformer and one of the founders of utopian socialism and the cooperative movement.