Lessons of the opium wars- Nikkei Asian Review. A long, elegant expressway bridge now spans a stretch of the Pearl River near Guangzhou, where in 1839 British warships blasted their way into an international trade agreement with China. 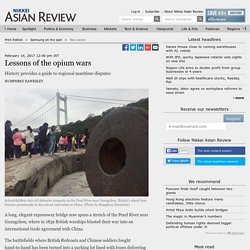 The battlefields where British Redcoats and Chinese soldiers fought hand-to-hand has been turned into a parking lot lined with buses delivering schoolchildren to learn about their history. Huge Chinese cannon still stand in their original positions behind thick stone walls, which were breached by the British attack. In China's eyes, the battle marks the beginning of its "Century of Humiliation," which has become the driving force for much of its current foreign policy. The amply funded Opium War museum and a nearby Sea Battle museum in Humen, just outside Guangzhou, recount how the First Opium War lasted until 1842, ending with the Treaty of Nanking, in which the opium trade was legitimized as a "mercantile transaction," along with less controversial trade. Michael Wood on... that Cecil Rhodes statue – is an explanatory plaque enough? ''It certainly needs an explanatory plaque... but is that enough? 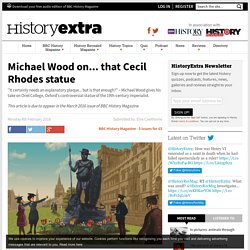 '' – Michael Wood gives his take on Oriel College, Oxford's controversial statue of the 19th-century imperialist. This article is due to appear in the March 2016 issue of BBC History Magazine Monday 8th February 2016 Submitted by: Ellie Cawthorne Illustration by Femke de Jong. Empire: The Controversies of British Imperialism – Free Online Course.

Exeter’s Centre for Imperial and Global History is once again launching its free online course, which starts September 14. 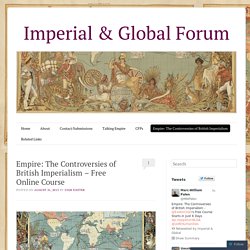 The British Empire was the largest empire ever seen. It ruled over a quarter of the world’s population and paved the way for today’s global economy. But British imperialism isn’t without controversy, and it continues to cause enormous disagreement among historians today.This free online course will help you understand why. Imperialismwhereitstops Complete. Rise of Western Dominance. Rise of Western Dominance A combination of economic and political transformations in Europe that began in the 1450 to 1750 era converged between 1750 and 1914 to allow the "west" (including the United States and Australia) to dominate the rest of the world. 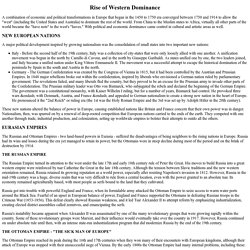 From to the Muslim states to , virtually all other parts of the world became the "have nots" to the west's "haves. " With political and economic dominance came control in cultural and artistic areas as well. A major political development inspired by growing nationalism was the consolidation of small states into two important new nations: - Before the second half of the 19th century, was a collection of city-states that were only loosely allied with one another. Bridging World History: Unit 20: Imperial Designs. Chapter 26: The West and the World - AP European History Chapter Outlines.

Chapter 24 - Industrialization and Imperialism: The Making of the European Global Order. AP World History: Imperialism - Videos & Lessons. Imperialism in the 19th Century. How did imperialism spread around the world? European Imperialism Around the World PDF. European Imperialism and Colonial Response. Chuck SchaeferDepartment of History, Valparaiso University The purpose of this brief article is to demonstrate how the Center for Research Libraries' (CRL) South Asia collection can be used to enhance classroom pedagogy and provide vast reserves of primary documents for undergraduate research. 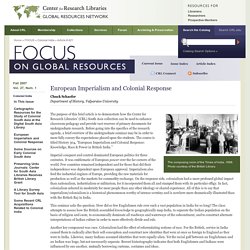 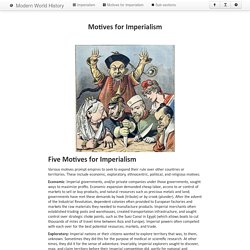 These include economic, exploratory, ethnocentric, political, and religious motives. Economic: Imperial governments, and/or private companies under those governments, sought ways to maximize profits. Economic expansion demanded cheap labor, access to or control of markets to sell or buy products, and natural resources such as precious metals and land; governments have met these demands by hook (tribute) or by crook (plunder).

Exploratory: Imperial nations or their citizens wanted to explore territory that was, to them, unknown. Ethnocentric: Imperial nations sometimes believed that their cultural values or beliefs were superior to other nations or groups. Political: Patriotism and growing imperial power spurred countries to compete with others for supremacy. Primary Source Images. The New Imperialism (c. 1870 - 1914) The New Imperialism (c. 1870 - 1914) The 1870s and 1880s witnessed a retreat from the free market and a return to state intervention in economic affairs. 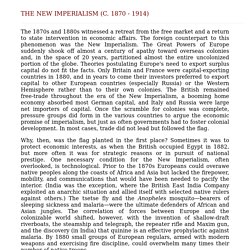 The foreign counterpart to this phenomenon was the New Imperialism. The Great Powers of Europe suddenly shook off almost a century of apathy toward overseas colonies and, in the space of 20 years, partitioned almost the entire uncolonized portion of the globe. Theories postulating Europe's need to export surplus capital do not fit the facts. Only Britain and France were capital-exporting countries in 1880, and in years to come their investors preferred to export capital to other European countries (especially Russia) or the Western Hemisphere rather than to their own colonies. TechnologyandImperialism. African Timelines Part III: African Slave Trade & European Imperialism.

Late 19th Cent Euro Imperialism1. Europe & Africa in the 19th Century. By the mid-19th century, Europe had undergone major changes that affected their beliefs about themselves. 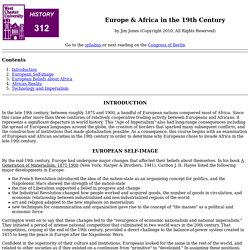 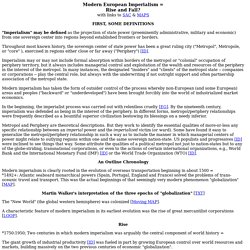 With links to SAC & MAPS "Imperialism" may be defined as the projection of state power (preeminently administrative, military and economic) from one sovereign center into regions beyond established frontiers or borders. Throughout most known history, the sovereign center of state power has been a great ruling city ("Metropol", Metropole, or "core" ), exercised in regions either close or far away ("Periphery") [ID]. European Imperialism for Dummies. Empire and Imperialism: Europe - Few subjects have generated as much controversy as that of European imperialism in the nineteenth and twentieth centuries. 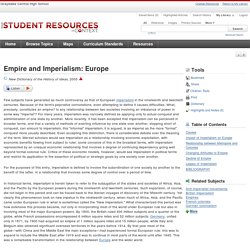 Because of the term's pejorative connotations, even attempting to define it causes difficulties. What, precisely, constitutes an empire? Is any relationship between two societies involving an imbalance of power in some way "imperial"? For many years, imperialism was narrowly defined as applying only to actual conquest and administration of one state by another. More recently, it has been accepted that imperialism can be perceived in broader terms, and that a variety of methods of exerting influence by one state over another, stopping short of conquest, can amount to imperialism; this "informal" imperialism, it is argued, is as imperial as the more "formal" conquest more usually described.

European Imperialism: Characteristics, Motives & Effects - Video & Lesson Transcript. Imperialism in Latin America. The Roosevelt Corollary Throughout his tenure as president Theodore Roosevelt actively sought to raise the United States to a first rate world power. The president pursued a policy that tried to lessen the influence of European nations within the Western Hemisphere.

Traditionally, European countries loaned money to Central and South American nations, and they frequently defaulted on their loans. Home. Imperialism: The United States looks beyond its borders. The practice of territorial expansion had been prominent in American thought and action from earliest colonial times.

This taking of lands from other nations or from native peoples, was accomplished by both war and treaty. The acquisition of land was made more presentable by justifying it in terms of "Manifest Destiny," - the belief that the westward spread of American control benefited backward people and was ordained by God. By the 1890s, the western frontier had disappeared, leading some citizens to believe that the period of expansion was concluded.

Others, however, saw the completion of the continental empire as a new beginning. Earlier expansion went beyond the continental boundaries only twice, with the purchase of Alaska and the annexation of Midway, both in 1867. Interest in acquiring Cuba waned following the Civil War, but Americans followed events there closely. Wealth. American Imperialism (1890-1919) - Videos & Lessons. Europeans and Imperialism in Asia and Africa: 1894 to 1908. Home | 1901-WW2 Index TURN of the CENTURY IMPERIALISM (1 of 6) The Boxer Uprising | British in Africa, to 1910 | French Colonialism and Vietnam, to 1908 | Germans in Africa, Asia and Oceania | The Dutch, Portuguese and Belgians | The Russo-Japanese War At the beginning of the twentieth century, Britain, France, Russia, Japan and Germany controlled parts of China. The British had led the way in forcing themselves onto the Chinese, with the others not far behind.

Foreign powers controlled much of China's economy. Common Chinese had been upset with their country's humiliation since it was defeated by the Japanese in 1894 – a war over influence in Korea. In 1899 in a few locations across China, groups encouraged by China's Dowager Empress, Cixi, went into the streets displaying slogans such as "protect the country," "justice on behalf of heaven," and "destroy the foreigner.

" In early 1900, Westerners and frightened Chinese Christians fled to European legations in China's capital, Beijing. Imperialism in africa. European Imperialism in the 19th Century. IMPERIALISM. Empire building is an old theme in world history. Societies have sought to dominate weaker neighbors as long ago as ancient and , all the way through to the present. Motivations have been similar - to obtain natural resources, to subdue enemies, to accrue wealth, to win power and glory - but until the rise of the west, most empires have expanded to territories next to their borders. With the combination of sea power, centralized governments, and industrialized economies, European nations set out to build empires all over the world, like none that had been seen before. Kipling's Imperialism.

Imperialism Webquest. India. Africa. Internet History Sourcebooks. Imperialism: Crash Course World History #35. [Regents Prep Global History] Imperialism: Introduction. Imperialism Imperialism occurs when a strong nation takes over a weaker nation or region and dominates its economic, political, or cultural life. Industrial Roots Abundant raw materials and vast markets are needed in order to maintain an industrialized economy. Raw materials such as iron and cotton can be turned into products such as steel and textiles. Finally, these products need to be sold to a market in order to realize a profit.