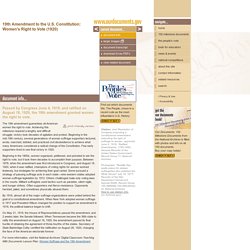 The 19th amendment guarantees all American women the right to vote. Achieving this milestone required a lengthy and difficult struggle; victory took decades of agitation and protest. Beginning in the mid-19th century, several generations of woman suffrage supporters lectured, wrote, marched, lobbied, and practiced civil disobedience to achieve what many Americans considered a radical change of the Constitution. Few early supporters lived to see final victory in 1920. 19th amendment for kids. History Net: Where History Comes Alive – World & US History Online. Six well-bred women stood before a judge in the Washington, D.C., Police Court on June 27, 1917. 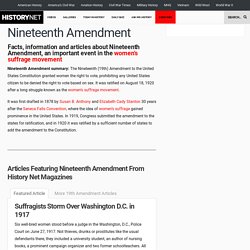 Not thieves, drunks or prostitutes like the usual defendants there, they included a university student, an author of nursing books, a prominent campaign organizer and two former schoolteachers. All were educated, accomplished and unacquainted with criminal activity. But today they stood accused in a court of law. Their alleged offense: ‘obstructing traffic. What they had actually done was to stand quietly outside the White House carrying banners urging President Woodrow Wilson to support their decades-long struggle to add one sentence to the Constitution: The right of citizens of the United States to vote shall not be denied or abridged by the United States or by any State on account of sex. C & E - 19th Amendment. The 19th Amendment in the United States Constitution provides men and women with equal voting rights. 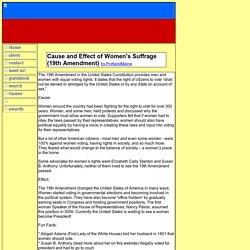 It states that the right of citizens to vote “shall not be denied or abridged by the United States or by any State on account of sex.” Cause: Women around the country had been fighting for the right to vote for over 300 years. Women, and some men, held protests and discussed why the government must allow women to vote. Supporters felt that if women had to obey the laws passed by their representatives, women should also have political equality by having a voice in creating these laws and input into voting for their representatives.

But a lot of other American citizens - most men and even some women - were 100% against women voting, having rights in society, and so much more. Some advocates for women’s rights were Elizabeth Cady Stanton and Susan B. Effect: 19th Amendment: Women's suffrage (women given voting rights) *** 19th Amendment: Woman Suffrage AssociationsThe National Woman Suffrage Association (NWSA) was founded by Susan B. 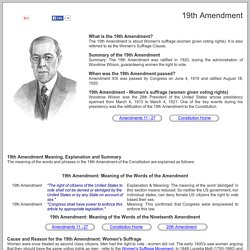 Anthony and Elizabeth Cady Stanton, and the American Woman Suffrage Association (AWSA) was founded by Lucy Stone and Julia Ward Howe. The two associations merged and growing numbers of women demanded the right to vote and agitated for an amendment to the Constitution and waged a state-by-state campaign. The outbreak of World War 1 saw President Woodrow Wilson declaring that it was a "war for democracy". History Brief: the 19th Amendment. Teaching With Documents: The Constitution of the United States: Amendment 19. CRS/LII Annotated Constitution Nineteenth Amendment. National Constitution Center. *Note: The Interactive Constitution is being developed over the course of the next two years. 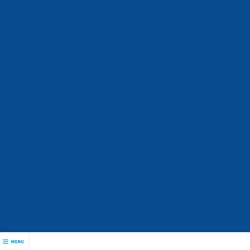 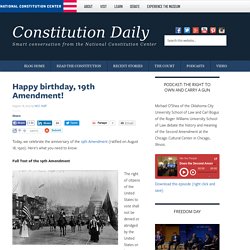 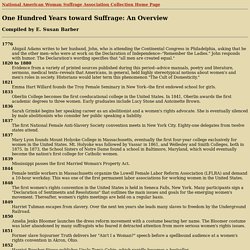 Susan Barber Abigail Adams writes to her husband, John, who is attending the Continental Congress in Philadelphia, asking that he and the other men--who were at work on the Declaration of Independence--"Remember the Ladies. " John responds with humor. The Declaration's wording specifies that "all men are created equal. " 1820 to 1880. Woman Suffrage Timeline. 1840 Lucretia Mott and Elizabeth Cady Stanton are barred from attending the World Anti-Slavery Convention held in London. 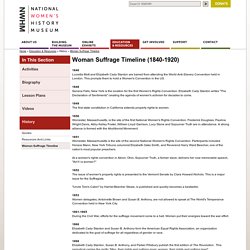 This prompts them to hold a Women's Convention in the US. 1848 Seneca Falls, New York is the location for the first Women's Rights Convention. Elizabeth Cady Stanton writes "The Declaration of Sentiments" creating the agenda of women's activism for decades to come. 1849 The first state constitution in California extends property rights to women. 1850 Worcester, Massachusetts, is the site of the first National Women's Rights Convention. Frederick Douglass, Paulina Wright Davis, Abby Kelley Foster, William Lloyd Garrison, Lucy Stone and Sojourner Truth are in attendance. Women's Rights Movement in the U.S.: Timeline of Events (1848-1920) 19th Amendment. VocabularyAbolish: To put an end to. 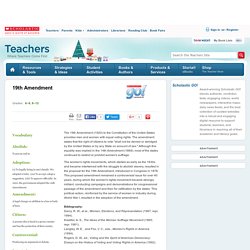 Adoption: (1) To legally bring in one's family: We adopted a baby. (2a) To accept: adopt a suggestion. (2b) To approve officially: In 1920, the government adopted the 19th Amendment. Amendment: A legal change or addition to a law or body of laws. Citizen: A person who is loyal to a given country and has the protection of that country. Controversial: Producing an argument or debate. Intertwine: To join by linking together. Ratification: To approve and make valid. Celebrate Women's Equality Day with our Fun Quiz. By: Elisabeth MacNamara. 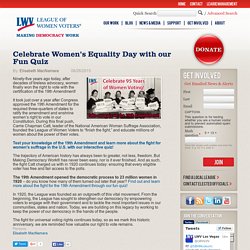 Woman's Suffrage, 19th Amendment, for Kids and Teachers - American Government Lesson Plans. 19th Amendment to the U.S. Constitution: Women's Right to Vote. 19th Amendment to the U.S. Constitution: Women's Right to Vote Joint Resolution of Congress proposing a constitutional amendment extending the right of suffrage to women, May 19, 1919; Ratified Amendments, 1795-1992; General Records of the United States Government; Record Group 11; National Archives. Passed by Congress June 4, 1919, and ratified on August 18, 1920, the 19th amendment guarantees all American women the right to vote. Achieving this milestone required a lengthy and difficult struggle; victory took decades of agitation and protest. The Nineteenth Amendment. Introduction The beginning of the fight for women suffrage is usually traced to the "Declaration of Sentiments" produced at the first woman's rights convention in Seneca Falls, N. Y. in 1848. Women's Suffrage. 19th Amendment From Grolier's Encyclopedia Americana The 19th Amendment (1920) to the Constitution of the United States provides men and women with equal voting rights.

The amendment states that the right of citizens to vote "shall not be denied or abridged by the United States or by any State on account of sex. " Although this equality was implied in the 14th Amendment (1868), most of the states continued to restrict or prohibit women's suffrage. The women's rights movements, which started as early as the 1830s and became intertwined with the struggle to abolish slavery, resulted in the proposal for the 19th Amendment, introduced in Congress in 1878. This proposed amendment remained a controversial issue for over 40 years, during which the women's rights movement became strongly militant, conducting campaigns and demonstrations for congressional passage of the amendment and then for ratification by the states.

Bibliography: Darcy, R. A group of women watching as Governor Edwin P. 19th Amendment - Women’s History. The turn of the 20th century brought momentum to the woman suffrage cause. Although the deaths of Stanton in 1902 and Anthony in 1906 appeared to be setbacks, the NASWA under the leadership of Catt achieved rolling successes for women’s enfranchisement at state levels. Between 1910 and 1918, the Alaska Territory, Arizona, Arkansas, California, Illinois, Indiana, Kansas, Michigan, Montana, Nebraska, Nevada, New York, North Dakota, Oklahoma, Oregon, South Dakota and Washington all extended voting rights to women.

Also during this time, through the Equality League of Self-Supporting Women (later, the Women’s Political Union), Stanton’s daughter Harriot Stanton Blatch (1856-1940) introduced parades, pickets and marches as means of calling attention to the cause. These tactics succeeded in raising awareness and led to unrest in Washington, D.C. Nineteenth Amendment to the United States Constitution. The 19th Amendment to the U.S. Constitution gave women the right to vote in 1920. Grades 3 – 5 | Lesson Plan | Unit.