How Instagram, Google, Facebook and Other Tech Notables Are Getting Out the Vote. Tech companies are playing a role in getting voters to the polls. 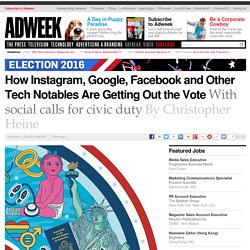 This afternoon, Instagram is sending many of its 100 million U.S. users a reminder to go vote. The mobile app announced today that it built the feature over the weekend, and it's reaching people who allow push notifications on their smartphones. Why Internet-Famous Dogs Are Fetching So Much Love From Brands. The dapper Menswear Dog has done sponsored posts for J.Crew, Banana Republic and Gentleman's Box. 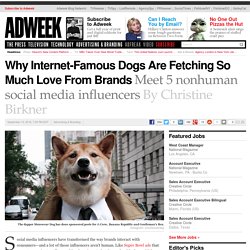 Social media influencers have transformed the way brands interact with consumers—and a lot of those influencers aren't human. Like Super Bowl ads that use cute puppies to sell everything from beer to ketchup, adorable dogs with huge social followings are getting a lot of love from brands these days. Dogs can fetch anywhere from $2,000 to $10,000 per sponsored post on Instagram, according to Rob Schutz, vp of growth at Bark & Co., parent company of BarkBox, a service that sends treats and other products to dog owners every month. Bark & Co. works with brands like P&G's Swiffer, United Airlines, American Express and Anheuser-Busch to promote their products with dog influencers on social media. 6 Engaging Social Media Marketing Campaigns That Delivered Results. On Flipboard. The Obstacles and Opportunities of Connected Cars for Advertisers. The Customer Experience Reviews Sponsored By The Obstacles and Opportunities of Connected Cars for Advertisers How Smartphones and Smart Kitchens are Remaking the Home Cook These 'Non-Official Sponsors' Found Clever Ways to Sneak Their Brand Into Brazil For Brands, Virtual Reality is All About Genuine Connection The 5 Most Innovative Marketing Activations From the Summer of Soccer AddThis Sharing Sidebar Share to Facebook. 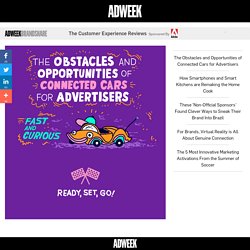 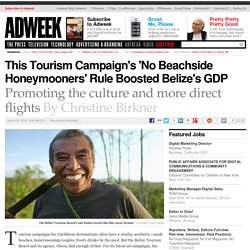 But the Belize Tourism Board and its agency, Olson, had enough of that. For its latest ad campaigns, the BTB focused on local experiences unique to Belize and making flying to the country easier. Three years ago, Olson started working with the BTB, launching "Discover How to Be," a campaign that showcased the country's culture and experiences you can have there. Olson and the BTB also worked with Southwest Airlines and WestJet Airlines to open up more routes and direct flights to Belize from the U.S. and Canada. The strategy worked—the campaign was responsible for increasing travel to Belize and boosting the country's GDP by 2.24 percent, according to the Central Bank of Belize. ?mkt_tok=eyJpIjoiT0RBelpUQXhZVEJoWmpGbSIsInQiOiJOQk5HbUpVN21QWVBmZmE3UVg1MzVOYzJmNU9VYkZOSCt5OUJJTzI0YUZ1XC9pamp1aEozS0R0aHdlSFN6dFNnUUhxQ2o3eld2WGR6WUVROVZPaGc2YW94cmVXa21hZnRXTTVuRGNVOEdJUEk9In0=#sm.

Coca-Cola is the longest continuous sponsor of the Olympics, going back almost 88 years. 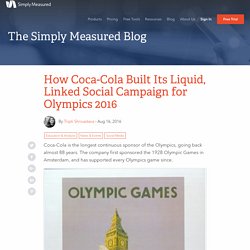 The company first sponsored the 1928 Olympic Games in Amsterdam, and has supported every Olympics game since. The brand has come a long way since, as has advertising, from radio and print in the 1920s to digital media today. In the last four years, since London 2012, social media platforms like Facebook, Twitter, Snapchat, and Instagram have also seen exponential growth, making this year’s Games truly the “most social games ever.” This Pepsi Spoof Aims to Ruin Cindy Crawford's Classic Ad Forever. A new ad from a consumer activist group is taking aim at Pepsi's sourcing practices by spoofing one of the soft drink company's most famous commercials—Cindy Crawford's roadside gas station spot from the 1992 Super Bowl. 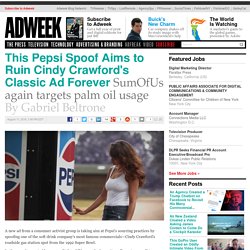 In the parody, created by nonprofit SumOfUs, a svelte brunette pulls up to a small town fueling station. Two young boys playing catch in a nearby yard stop and gape as she struts—in a tight white tanktop and cutoff shorts—to the vending machine, grabs a Crystal Pepsi and proceeds to chug it. The similarities to the original end there, as the scene takes a fast downward spiral into disturbing territory. 3 Brands Using Facebook in Particularly Effective Ways During the Rio Games. Thanks to the explosive growth of platforms like Snapchat, Instagram, Twitter and Facebook, the 2016 Rio Games are widely assumed to be the most social ever. 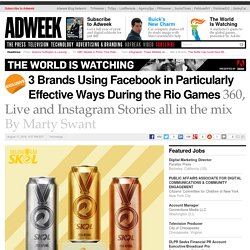 And they're also easily the most mobile. Marcos Angelini, the head of Facebook's office in Brazil, said that during the opening ceremony alone, 52 million people had about 110 million interactions on the platform, while another 21 million had 62 million actions on Instagram. (Brazil was the most active country, with about 13 percent of all Brazilian users engaged during the opening ceremony.) 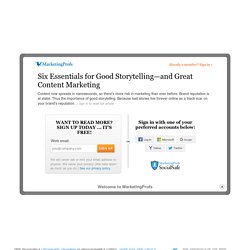 Which makes me wonder: Do marketers actually understand storytelling in the context of content marketing? Jan Rezab in re/code: Hope for Virality, Focus on Shareability. YouTube Videos: What’s not to like? Brands spend a lot of money on promotional videos in hopes they can go viral; after all, what company doesn’t love word-of-mouth advertising? 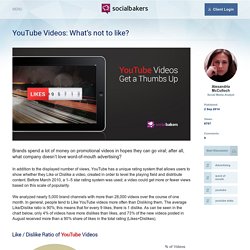 In addition to the displayed number of views, YouTube has a unique rating system that allows users to show whether they Like or Dislike a video, created in order to level the playing field and distribute content. Before March 2010, a 1–5 star rating system was used; a video could get more or fewer views based on this scale of popularity.

We analyzed nearly 5,000 brand channels with more than 28,000 videos over the course of one month. In general, people tend to Like YouTube videos more often than Disliking them. The Viral Marketing Cheat Sheet. Perhaps nothing is as effective and efficient in spreading your message as a viral marketing campaign. 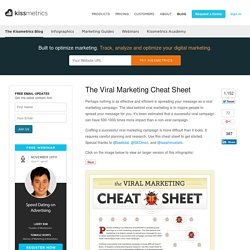 The idea behind viral marketing is to inspire people to spread your message for you. It’s been estimated that a successful viral campaign can have 500-1000 times more impact than a non-viral campaign. Crafting a successful viral marketing campaign is more difficult than it looks. It requires careful planning and research. Use this cheat sheet to get started. Click on the image below to view an larger version of this infographic: View an enlarged version of this Infographic » Click here to download a .pdf version of this infographic. Simply copy and paste the code below into the html of your website to display the infographic presented above: <b>++ Click Image to Enlarge ++</b><br /><a href=" src=" alt="The Viral Marketing Cheat Sheet"></a><br />Source: <a href=" Viral Marketing Cheat Sheet Infographic</a> A Simple Framework for Creating a Viral Video. Do you ever wonder what it takes to create a viral video?

Do you want your video content to spread to the masses? While creating a viral video is part science and part art, there are 5 key principles you must follow when creating your own viral video. Viral Marketing. The Viral Marketing Cheat Sheet. How These 10 Marketing Campaigns Became Viral Hits. This story first appeared in the May 2014 issue of Entrepreneur. To receive the magazine, click here to subscribe. Getting your brand noticed via social media grows more difficult with each passing day. Users upload 100 hours of video to YouTube every 60 seconds and share more than 4.75 billion pieces of content on Facebook every 24 hours. Add to that 500 million new tweets per day, and the chances of breaking through to a wider audience can seem virtually nonexistent. A Simple Framework for Creating a Viral Video. Nine Tips for Deploying a Measurable Viral Content Strategy. Examples of Viral Marketing Campaigns.