Labour Behind the Label 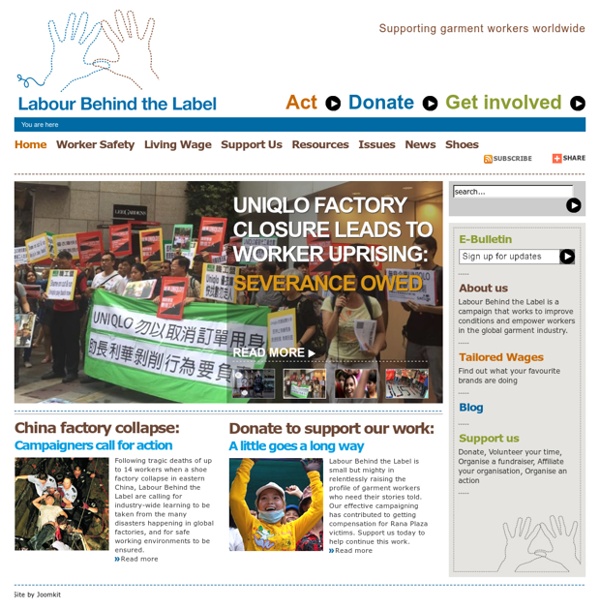 peppermint magazine Love Your Clothes Love Your Clothes aims to raise awareness of the value of clothes and help us make the most of the clothes we already have. We focus on encouraging people to think about way they purchase, use and dispose of clothes. We provide easy and practical tips and advice on how to: make your clothes last longerreduce the environmental impact of laundering your clothesdeal with unwanted clothesmake the most of your wardrobe. This will help reduce our impact on the environment by reducing the amount of carbon, water and waste created through the manufacture, laundry and disposal of clothing while also helping to save money and resources. Love Your Clothes has been developed with industry as part of the Sustainable Clothing Action Plan (SCAP), which is coordinated by WRAP, a not-for-profit organisation and supported by UK Governments (England, Scotland, Wales and Northern Ireland).

Rag Trade Reporter: Michael UsherProducer: Phil Goyen This is a story our major retailers would prefer you didn't see. 60 Minutes has just been inside the third world factories where thousands of workers are making the cut-price clothes that we wear every day. Getting our cameras into the country, and then into the factories, was not easy. The government of Bangladesh is on edge after more than 1000 people died in a factory collapse in April. But once inside, what we saw was eye-opening and makes you think twice about where your clothes come from. Statements: To view Oxfam Australia's statement, click here. Kmart has also issued a statement. To read a statement from Best & Less, click here.

Ethical fashion in Australian chains - Fair trade clothing | Not So Naked The elephant in the room is stirring. It angrily awoke when 1,129 people died, and thousands more were injured in a fashion factory in Bangladesh. It flared its nostrils when a shoe factory that supplies Asics collapsed, killing six. It stomped its feet as 23 people were killed in a Cambodian factory producing clothes for H&M. The ethics of fashion production is demanding our attention. As human beings, we have a responsibility to support the rights of our brothers and sisters in other parts of the world. That's not why I investigated the matter, though. Armed with my background as a newspaper journalist, I thought they would be eager to show consumers how responsible they are. Not one would comment. ASOS was the only retailer to provide any resource to demonstrate its ethics. I'm not here to point fingers. I'll continue to look for ways to reconcile fast fashion and human rights. Where to from here?

The Detox Catwalk the detox catwalk It’s time to find out which clothing companies are walking the talk to a toxic-free future. Over the past 24 months hundreds of thousands of activists, fashionistas, bloggers and consumers came together to call for fashion without pollution. From record-breaking strip teases to social media storms, people power brought about Detox commitments from 18 major textile companies. Take a look down the runway at the story so far. Now it’s time to see who is acting on their commitments, setting a new Detox trend in the industry, who is holding us back with nothing more than ineffective paper commitments and greenwashed promises and who is lagging behind the pack, unwilling to kick their toxic addiction and commit to Detox. Leaders - Detox committed companies leading the industry towards a toxic-free future with credible timelines, concrete actions and on-the-ground implementation.

British Fashion Council - Estethica - About Estethica - Introduction to esthetica The British Fashion Council founded Estethica to showcase the growing movement of cutting edge designers committed to working eco sustainably. Estethica has evolved to become the hub of London's ethical fashion industry. The success of this initiative, the internationally strongest of its kind, is evident in its rapid growth. Estethica will showcase 9 cutting-edge designers for autumn/winter 2014 at London Fashion Week [^] in the West Wing of Somerset House. All Estethica designers adhere to at least one of the three Estethica principles of fair-trade and ethical practices, organic and recycled materials and are selected for both their ethical credentials and design excellence. In 2011, Estethica celebrated its 5th Anniversary as the industry’s leading showcase of ethical fashion. Estethica is co-curated by Orsola de Castro, founder of green label From Somewhere, Filippo Ricci and The British Fashion Council.