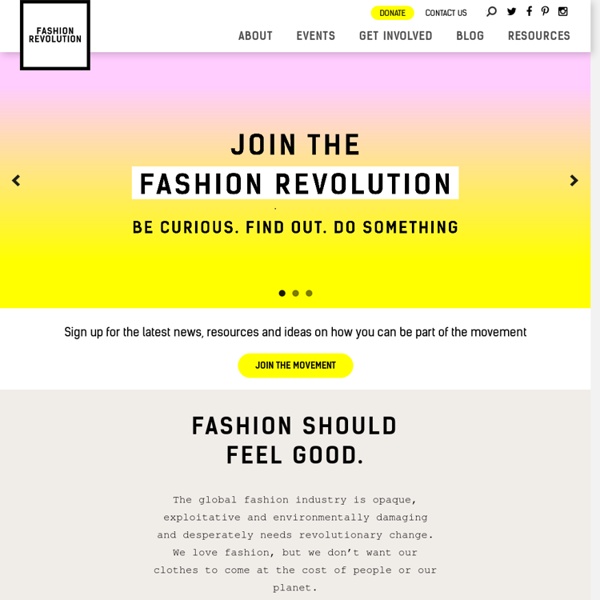 Zero Waste Skirt Tutorial We haven’t heard from zero waste extraordinaire Frankie Campbell in a little while. She’s been a busy bee working on a new, exciting collection! Hopefully we’ll see more of that in the coming months, but for now, here she is with a fabulous zero waste skirt for you to sink your teeth into. Fabrics The end of capitalism has begun The red flags and marching songs of Syriza during the Greek crisis, plus the expectation that the banks would be nationalised, revived briefly a 20th-century dream: the forced destruction of the market from above. For much of the 20th century this was how the left conceived the first stage of an economy beyond capitalism. The force would be applied by the working class, either at the ballot box or on the barricades. The lever would be the state. The opportunity would come through frequent episodes of economic collapse.

MISSION — MANUFACTURE NEW YORK Manufacture New York is anchored in our CEO and Founder, Bob Bland’s, practical experience over a decade as a NYC designer, and her desire to help create social good within the fashion industry at large, especially here in New York City. If something like Manufacture New York already existed, she would be a member & produce her fashion label there. However, with the current infrastructure of domestic apparel manufacturing dwindling, we simply have to create a new model and ecosystem. There are old factories sitting empty, and industrial space in the Garment District is being rezoned as residential/commercial. There are excellent, hard-working production managers and sewers who are now working out of their homes, have had to change industries, or are simply unemployed.

Who made your clothes? A ‘Slow Fashion’ revolution rises On April 24, 2013, a garment factory collapsed at Rana Plaza in Bangladesh. The incident led to the death of 1,129 workers — a tragedy that revealed the ugly truth behind the clothes on almost everyone’s backs: it’s very likely they were made in sweatshops like this. Not enough has changed in the two years since that incident, according to a Human Rights Watch report released Wednesday titled “Whoever Raises their Head Suffers the Most.” The demand for an ever-replenishing supply of cheap “fast fashion” has been a race to the bottom, in which factories outsource to the lowest bidders, resulting in human rights violations for the workers and unregulated pollution of the environment.

An Interview With Carry Somers, The Founder of Fashion Revolution This week almost three years on from the devastating Rana Plaza complex collapse in Dhaka, Bangladesh, I managed to catch up with Carry Somers, to find out more about the Fashion Revolution that she has started and why she and many others are resolute in calling for change in the fashion industry. Why did you decide to start Fashion Revolution and why do you think it is so important? In the aftermath of the Rana Plaza collapse, everywhere I looked, there were newspaper articles calling for a more ethical fashion industry. Exciting Breakthrough In Recycled Cotton Fabric Have you heard the news? The textile industry is abuzz with a miraculous new fibre. Lenzing, a company well-known and respected for its sustainable innovations, has just launched a new product combining their groundbreaking wood-based fibre, Tencel, and cotton waste fibre.

See Ya Later, Capitalism — the Collaborative Economy Is Taking Over — Backchannel The old model of unwieldy behemoths is giving way to a new one of collaboration. Welcome to the world of Peers. Compare the phone you had as a kid to the one in your pocket now. The GreenShows How much do you normally spend on your clothing? If you are like most average Americans, you have likely grown accustomed to spending around $10 on a t-shirt and around $100 on a more intricate item (say, a dress, jacket or shoes). Unfortunately, these prices that so many of us are used to are too low. In the past 20 years of fast fashion’s cutthroat race to the bottom, we have lost touch with what clothing actually costs and why. What informs the price of a garment and how has our clothing become so cheap?

Toxic Threads: The Big Fashion Stitch-Up Publication - 20 November, 2012 Greenpeace International has commissioned a new investigation that delves even further into the hazardous chemicals used in the production of high street fashion. Spurred on by the success of Greenpeace's Detox Campaign, which exposed the links between textile manufacturing facilities using toxic chemicals and water pollution, the investigation was expanded to include 20 global fashion brands – including Armani, Levi's and Zara – as well as more hazardous chemicals. A total of 141 items of clothing were purchased in April 2012 in 29 countries and regions worldwide from authorised retailers. The chemicals found included high levels of toxic phthalates in four of the garments, and cancer-causing amines from the use of certain azo dyes in two garments. As inherently hazardous substances, any use of NPEs, phthalates, or azo dyes that can release cancer-causing amines, is unacceptable.