FREEDOM HERO: IQBAL MASIH. Young Activist's Death Hits Pakistani Carpet Sales : Trade: Exports to West have diminished even though producers haven't been linked to death of 12-year-old who fought child labor. LAHORE, Pakistan — Already hit with sagging exports, Pakistani carpet dealers say they have lost more sales to Western buyers since the killing of a young activist who spoke out against child labor. 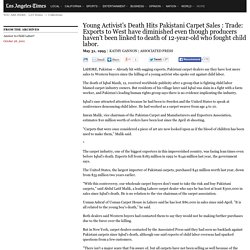 The death of Iqbal Masih, 12, received worldwide publicity after a group that is fighting child labor blamed carpet industry owners. But residents of his village later said Iqbal was slain in a fight with a farm worker, and Pakistan's leading human rights group says there is no evidence implicating the industry. Iqbal's case attracted attention because he had been to Sweden and the United States to speak at conferences denouncing child labor. He had worked as a carpet weaver from age 4 to 10. Imran Malik, vice chairman of the Pakistan Carpet and Manufacturers and Exporters Association, estimates $10 million worth of orders have been lost since the April 16 shooting. The carpet industry, one of the biggest exporters in this impoverished country, was facing lean times even before Iqbal's death.

Iqbal Masih and Craig Kielburger: children against child labour. Young people have the power to make a difference The single biggest problem we've had is adults who will not take us seriously, who think that because we are young we will oversimplify the issue of child labour and not do our research. 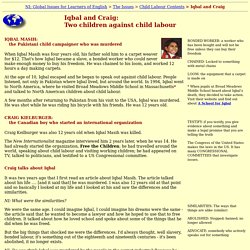 Many of our members are as young as nine or ten years old but we do our research as well as taking action. Child labour is a very complex problem, that's the truth. But that can't be used as an excuse not to take action. Consumer pressure can change things. We're a group of young people who volunteer to give up some of their spare time to work on this issue. NI: You're only 14 years old, but you've travelled all over the world, you've often been interviewed on TV, you've talked to prime ministers and senators - isn't this difficult for a fourteen year-old? Well, I've met children who work 12 hours a day in agriculture, or sweatshops, or fighting a war.

Laura Hannant is a girl aged 12, from Ottawa. Free the Children NI interviewed Craig in 1997. Top 10 Child Labor Facts. 10 Child Labor Facts Child labor, as defined by the International Labor Organization, is “work that deprives children of their childhood, their potential and their dignity, and that is harmful to physical and mental development.” 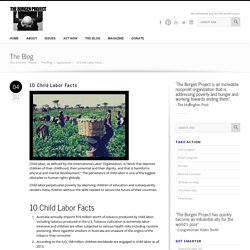 The persistence of child labor is one of the biggest obstacles to human rights globally. Child labor perpetuates poverty by depriving children of education and subsequently renders these children without the skills needed to secure the future of their countries. Young Migrant Workers Toil in U.S. Fields. Santos Polendo remembers his first day of work like it was yesterday. 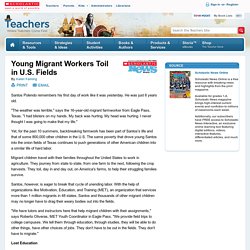 He was just 6 years old. "The weather was terrible," says the 16-year-old migrant farmworker from Eagle Pass, Texas. "I had blisters on my hands. My back was hurting. My head was hurting. Yet, for the past 10 summers, backbreaking farmwork has been part of Santos's life and that of some 800,000 other children in the U.S. Migrant children travel with their families throughout the United States to work in agriculture. Santos, however, is eager to break that cycle of unending labor. "We have tutors and instructors here that help migrant children with their assignments," says Roberto Oliveras, MET Youth Coordinator in Eagle Pass.

Lost Education In many ways, Santos is lucky. Each May, the school year ends early for 15-year-old Dora Perez so that she can make the 30-hour drive with her family to Minnesota. "The work starts before school ends, so we just have to go," says Dora, a freshman at Eagle Pass High School. Causes of Child Labor - The Child Labor Education Project. Child labor persists even though laws and standards to eliminate it exist. 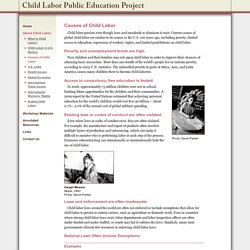 Current causes of global child labor are similar to its causes in the U.S. 100 years ago, including poverty, limited access to education, repression of workers’ rights, and limited prohibitions on child labor. Poverty and unemployment levels are high. Poor children and their families may rely upon child labor in order to improve their chances of attaining basic necessities. More than one-fourth of the world's people live in extreme poverty, according to 2005 U.N. statistics.

The intensified poverty in parts of Africa, Asia, and Latin America causes many children there to become child laborers. Access to compulsory, free education is limited. Photo: David Parker.