Sex Abuse in the Catholic Church

Catholic bishops not obliged to report clerical child abuse, Vatican says. By Stephanie Kirchgaessner | 10 February 2016The Guardian The Catholic church is telling newly appointed bishops that it is “not necessarily” their duty to report accusations of clerical child abuse and that only victims or their families should make the decision to report abuse to police. 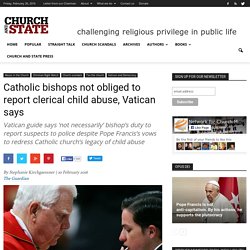 A document that spells out how senior clergy members ought to deal with allegations of abuse, which was recently released by the Vatican, emphasised that, though they must be aware of local laws, bishops’ only duty was to address such allegations internally. “According to the state of civil laws of each country where reporting is obligatory, it is not necessarily the duty of the bishop to report suspects to authorities, the police or state prosecutors in the moment when they are made aware of crimes or sinful deeds,” the training document states. The current guidelines written by Anatrella make only passing references to prevention policies. The guidelines reflect Anatrella’s views on homosexuality. St. Vatican, Sicily, France, India, Australia, Mexico – A Spotlight on Pope Francis Enabling Sex Abuse. NY Bishop Rape Shames Abuse Victims: Boys Are ‘Culpable’ For Their Actions At 7 Years Old. By Charles Topher | 16 September 2015Addicting Info. 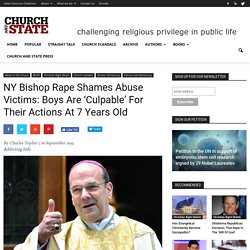 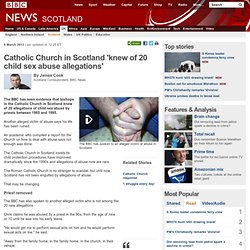 Another alleged victim of abuse says his life has been ruined. An academic who compiled a report for the Church on how to deal with abuse says not enough was done. Catholic priest blames children for sexual abuse. New York - A prominent Catholic priest says he believes “youngsters” are often to blame for sexual abuse by priests and that priests who are first time offenders should not be jailed for their crime. 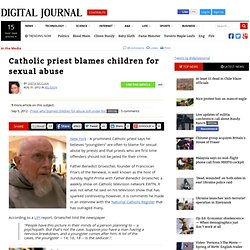 Father Benedict Groeschel, founder of Franciscan Friars of the Renewal, is well known as the host of Sunday Night Prime with Father Benedict Groeschel, a weekly show on Catholic television network EWTN. It was not what he said on his television show that has sparked controversy however, it is comments he made in an interview with the National Catholic Register that has outraged many. According to a UPI report, Groeschel told the newspaper "People have this picture in their minds of a person planning to -- a psychopath. But that's not the case. Suppose you have a man having a nervous breakdown, and a youngster comes after him.

Read more... Groeschel continued by saying "Well, it's not so hard to see. Patsw Fr. Aherrero The Cathedral of St. Catholic church releases sexual abuse files, relieves cardinal of duties. The Catholic archdiocese of Los Angeles is releasing thousands of pages of personnel files relating to child molestation by priests, part of a 2007 civil court settlement. 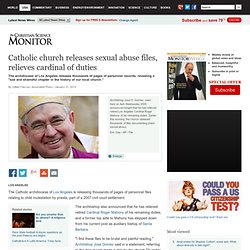 Skip to next paragraph Subscribe Today to the Monitor Click Here for your FREE 30 DAYS ofThe Christian Science MonitorWeekly Digital Edition The archbishop also announced that he has relieved retired Cardinal Roger Mahony of his remaining duties, and a former top aide to Mahony has stepped down from his current post as auxiliary bishop of Santa Barbara. "I find these files to be brutal and painful reading," Archbishop Jose Gomez said in a statement, referring to the documents made public by the church Thursday night. Priest shuffling - The Skeptic's Dictionary. 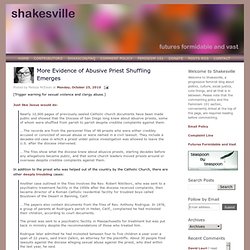 Just like Jesus would do: Nearly 10,000 pages of previously sealed Catholic church documents have been made public and showed that the Diocese of San Diego long knew about abusive priests, some of whom were shuffled from parish to parish despite credible complaints against them....The records are from the personnel files of 48 priests who were either credibly accused or convicted of sexual abuse or were named in a civil lawsuit. They include a decades-old case in which a priest under police investigation was allowed to leave the U.S. after the diocese intervened....The files show what the diocese knew about abusive priests, starting decades before any allegations became public, and that some church leaders moved priests around or overseas despite credible complaints against them. In addition to the priest who was helped out of the country by the Catholic Church, there are other deeply troubling cases: [H/T to Shaker Lena.] Predator Priests Shuffled Around Globe.

This undated photo from a page of Kiremba, the 2008 newsletter released by the Bresciani missionaries, shows Father Mario Pezzotti with Kayapo Indian children in Brazil. 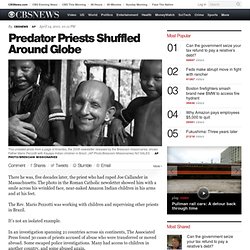 (AP Photo/Bresciani Missionaries) NO SALES AP Photo/Bresciani Missionaries There he was, five decades later, the priest who had raped Joe Callander in Massachusetts. The photo in the Roman Catholic newsletter showed him with a smile across his wrinkled face, near-naked Amazon Indian children in his arms and at his feet. The Rev. Mario Pezzotti was working with children and supervising other priests in Brazil. It's not an isolated example. Roman Catholic sex abuse cases by country. This page documents Roman Catholic sex abuse cases by country. 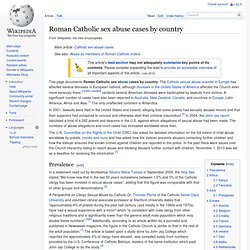 The Catholic sexual abuse scandal in Europe has affected several dioceses in European nations, although dioceses in the United States of America affected the Church even more seriously there,[citation needed] certainly several American dioceses were bankrupted by lawsuits from victims. A significant number of cases have also been reported in Australia, New Zealand, Canada, and countries in Europe, Latin America, Africa and Asia.[1] The only unaffected continent is Antarctica. In 2001, lawsuits were filed in the United States and Ireland, alleging that some priests had sexually abused minors and that their superiors had conspired to conceal and otherwise abet their criminal misconduct.[2] In 2004, the John Jay report tabulated a total of 4,392 priests and deacons in the U.S. against whom allegations of sexual abuse had been made.

The numbers of abuse allegations and court cases has increased worldwide since then. The U.N. Fr.