Abuse of Patents and Copyrights

YouTube's Putting Its Money Where Its Mouth Is on Fair Use. The DMCA: How It Works and How It's Abused. TPP trade deal: Here's what the Internet hates so far. After years of warning that the secretive Trans-Pacific Partnership would be devastating for Internet freedom, intellectual property experts have finally gotten to look at the final draft of the proposed treaty. 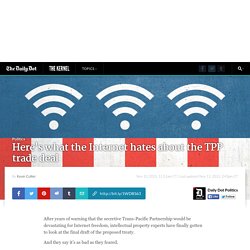 And they say it’s as bad as they feared. Spanning 30 chapters over thousands of pages, the TPP is enormous. It took its 12 member nations—the U.S., Mexico, Canada, as well as Oceania and countries in South America and Asia—five years to negotiate it. Different civil groups have all kinds of criticisms of the TPP’s provisions, ranging from labor to the environment, though the main theme is that it emphasizes business over civil interests. Copyright. Abuse of Drug Patents Costing Lives. Why Twitter Can and Will Make GIFs Disappear. Lenz v. Universal Music Corp. Facts[edit] In February 2007, Stephanie Lenz posted on YouTube a twenty-nine second clip of her children dancing to Prince's "Let's Go Crazy. 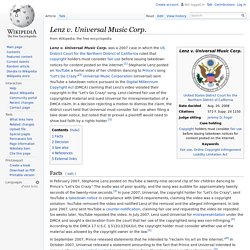 " The audio was of poor quality, and the song was audible for approximately twenty seconds of the twenty-nine seconds.[3] In June 2007, Universal, the copyright holder for "Let's Go Crazy", sent YouTube a takedown notice in compliance with DMCA requirements, claiming the video was a copyright violation. YouTube removed the video and notified Lenz of the removal and the alleged infringement. In late June 2007, Lenz sent YouTube a counter-notification, claiming fair use and requesting the video be reposted. Six weeks later, YouTube reposted the video. In September 2007, Prince released statements that he intended to "reclaim his art on the internet Decision[edit] The district court held that copyright owners must consider fair use before issuing DMCA takedown notices. On September 14, 2015, the 9th Circuit affirmed the District Court.[10] See also[edit] Games Workshop gets someone's book yanked from Amazon for using the term "Space Marine"

Appeals Court Rules the Batmobile is Copyright Protected. "Happy Birthday" Copyright Ruled to Be Invalid. The world's most popular English-language song is potentially free from copyright after a federal judge ruled on Tuesday that filmmakers challenging Warner/Chappell Music's hold on "Happy Birthday to You" should be granted summary judgment. 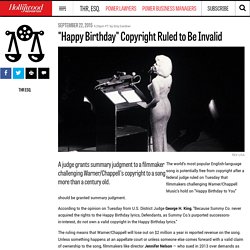 According to the opinion on Tuesday from U.S. District Judge George H. King, "Because Summy Co. never acquired the rights to the Happy Birthday lyrics, Defendants, as Summy Co.’s purported successors-in-interest, do not own a valid copyright in the Happy Birthday lyrics. " The ruling means that Warner/Chappell will lose out on $2 million a year in reported revenue on the song. Unless something happens at an appellate court or unless someone else comes forward with a valid claim of ownership to the song, filmmakers like director Jennifer Nelson — who sued in 2013 over demands as much as six figures to license — will no longer have to pay to feature "Happy Birthday" in motion pictures and television shows. 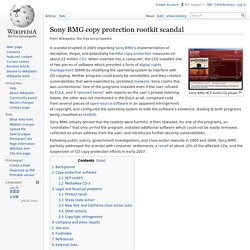 When inserted into a computer, the CDs installed one of two pieces of software which provided a form of digital rights management (DRM) by modifying the operating system to interfere with CD copying. Neither program could easily be uninstalled, and they created vulnerabilities that were exploited by unrelated malware. Sony claims this was unintentional. One of the programs installed even if the user refused its EULA, and it "phoned home" with reports on the user's private listening habits; the other was not mentioned in the EULA at all, contained code from several pieces of open-source software in an apparent infringement of copyright, and configured the operating system to hide the software's existence, leading to both programs being classified as rootkits.