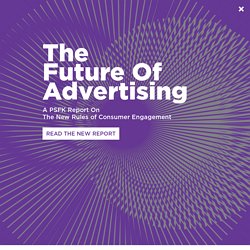 Gulülu turns drinking water into a game for kids. Through the power of smart sensors and the magic of the cloud, children being parched is on its way to becoming a thing of the past — at least, if the Gulülu team has anything to say in the matter. 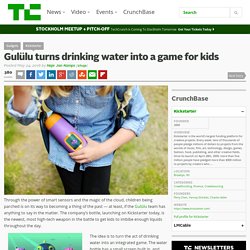 The company’s bottle, launching on Kickstarter today, is the newest, most high-tech weapon in the battle to get kids to imbibe enough liquids throughout the day. The Gulülu pets that live in the water bottles. Cute, no? Osmo's blocks are like Lego for coding. It's simply called Osmo Coding, and it builds on top of the Reflective AI platform the company launched a couple years ago. 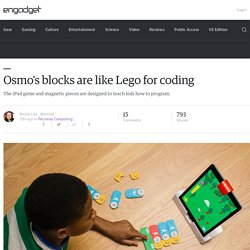 You essentially fit a mirror over the front-facing camera of an iPad, and through some clever software and visual-recognition tech, it's able to translate any physical objects in front of the iPad to a digital environment. Previous Osmo titles include Words, which uses letter pieces, and Tangram, which uses geometric objects. Osmo Coding functions in much the same way, except that you use physical blocks to direct the actions of a character in a game. The character is called Awbie, and it loves strawberries. 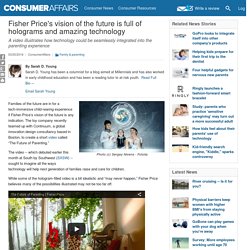 The toy company recently teamed up with Continuum, a global innovation design consultancy based in Boston, to create a short video called “The Future of Parenting.” The video -- which debuted earlier this month at South by Southwest (SXSW) -- sought to imagine all the ways technology will help next generation of families raise and care for children. Brixo Blocks Allow ToTo Create Circuits In Your Lego Builds (video) - Geeky Gadgets. Lego builders that would like to add a little extra interaction to their Lego brick creations may be interested in a new range of bricks called Brixo blocks that can easily allow you to add circuits to your builds. 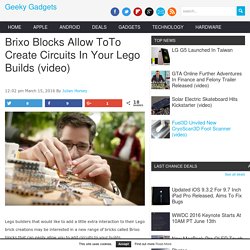 The Brixo blocks come in a variety of different designs allowing you to create circuits that can light up, react to proximity or sound without the need for any wires and are fully compatible with all standard building blocks. Check out the video below to learn more about the Brixo blocks that are currently still under development and will be available soon to purchase.

By registering your email address and sharing the new block with your friends you will also be eligible to receive ten extra chrome bricks at launch. The creators of Brixo blocks explain a little more: BRIXO blocks are chrome-coated building blocks that act as electric conductors. Source: GetBrixo Filed Under: Top News, Toys Popular Geeky Gadgets Deals. Kid-to-kid toy app introduces children to the sharing economy. Sharing is something children all struggle with to some degree, and many have a hard time parting with their precious toys, even if they barely play with them. 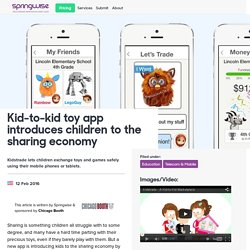 Forget cars, the self-driving stroller is coming. With self-driving cars dominating the tech conversation in recent months, it's no surprise that someone would eventually attempt to bring automation to parents sick of pushing their young child in a stroller. 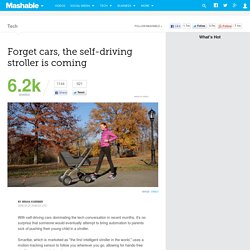 Smartbe, which is marketed as "the first intelligent stroller in the world," uses a motion-tracking sensor to follow you wherever you go, allowing for hands-free strolling or an assisted push. Like all great ideas nowadays, the Smartbe is currently in its crowdfunding phase on IndieGogo. However, if all goes correctly, the stroller will easily be the most-decked out baby carrier ever created. In addition to an electric motor that will assist in movement, the stroller will also feature wireless speakers so your baby can rock out, a bottle warmer, a rocker, three retractable canopies and a temperature-controlled bassinet.

As for safety features, the Smartbe will have directional signals, internal and external cameras and an anti-theft alarm. VertiGo: A Wall-Climbing Robot From Disney  As if almost out of no where, Disney Research Labs have released a video showcasing a 3D Printed (in part) Wall-Climbing Robot that is more like an all-terrain owning vehicle from a future military prototype, than a Disney research project… But I want one! 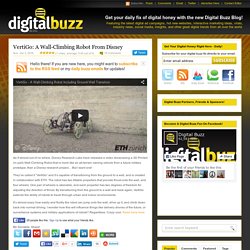 They’ve called it “VertiGo” and it’s capable of transitioning from the ground to a wall, and is created in collaboration with ETH. The robot has two tiltable propellers that provide thrust onto the wall, and four wheels. One pair of wheels is steerable, and each propeller has two degrees of freedom for adjusting the direction of thrust. "Smart Letters" is changing the way kids read and write. Marbotic, a French company which is pioneering integrated learning for pre-school kids, has launched Smart Letters, a new letter based toy used in conjunction with a tablet. 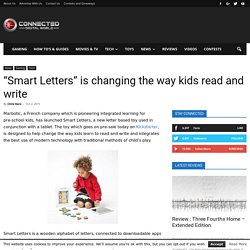 The toy which goes on pre-sale today on Kickstarter, is designed to help change the way kids learn to read and write and integrates the best use of modern technology with traditional methods of child’s play. Smart Letters is a wooden alphabet of letters, connected to downloadable apps available on Apple designed for three to seven year old kids. As a child learns to read, they begin to make connections between the shapes and sounds of letters. Each wooden letter interacts with the apps on a tablet, helping to build a picture of the alphabet and early word formation in a child’s mind. The bringing together of both the physical and digital aspect of learning produces an enhanced overall learning experience for kids, teachers and parents alike. Founder, Marie Merouze comments: StoryHome encourages family storytelling from anywhere in the world. The StoryHome is aimed at helping families to connect via storytelling. it allows family members to share stories with each other wherever they are in the world. 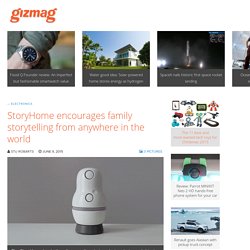 If a grandparent records a story on one StoryHome device, it can be relayed to their grandkids as a bedtime story on another. The StoryHome is shaped like a Russian doll and measures 145 x 88 mm (5.7 x 3.5 in). It comes with a dock into which it can be placed to charge and to connect to the internet. New Zealand bank ASB introduces a cashless money box for kids. With the rise of contactless payments and banking apps, giving kids coins for their pocket money might seem a little bit ordinary these days. Enter Clever Kash, a cute new digital money box from New Zealand bank ASB… As the film below explains, the Clever Kash money box allows you to give your children their pocket money virtually, via an app. The process is quite fun – kids can sweep coins on the app over towards their elephanty bank (hmmm, this doesn’t quite have the same ring as piggy bank) and watch the numbers on its screen go up.