Psychological abuse. Psychological abuse (also referred to as psychological violence, emotional abuse, or mental abuse) is a form of abuse, characterized by a person subjecting, or exposing, another person to behavior that may result in psychological trauma, including anxiety, chronic depression, or post-traumatic stress disorder.[1][2][3] It is often associated with situations of power imbalance in abusive relationships including bullying, gaslighting, and abuse in the workplace.[2][3] It also may be perpetrated by persons conducting torture, other violence, acute or prolonged stealing and human rights abuse, particularly without legal redress such as detention without trial, false accusations, false convictions and extreme defamation such as where perpetrated by state and media. 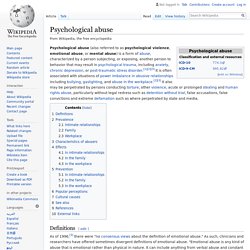 Definitions[edit] As of 1996[update],[3] there were "no consensus views about the definition of emotional abuse. " As such, clinicians and researchers have offered sometimes divergent definitions of emotional abuse. Prevalence[edit] 5 Things Everyone Must Understand About Verbal Abuse. 15 Types of Verbal Abuse in Relationships. Are You Being Emotionally Abused? With so much (rightful) attention being paid to physical abuse and domestic violence, I wanted to also shine some light on emotional abuse, which can be just as psychologically damaging. 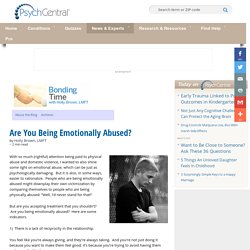 But it is also, in some ways, easier to rationalize. People who are being emotionally abused might downplay their own victimization by comparing themselves to people who are being physically abused: “Well, I’d never stand for that!” But are you accepting treatment that you shouldn’t? Are you being emotionally abused? Here are some indicators. 1) There is a lack of reciprocity in the relationship. You feel like you’re always giving, and they’re always taking. 2) That’s because your partner has a tendency to make everything your fault. You can’t assume support on even the most mundane topics that have nothing to do with the relationship, because you feel like he/she is looking for a way to make you to blame. 3) Your self-esteem is being systematically dismantled. Signs of an Emotionally Abusive Relationship.

Unlike physical or sexual abuse, emotional abuse can be much harder to pinpoint and recognize. 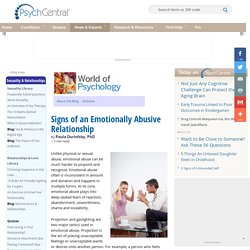 Emotional abuse often is inconsistent in amount and duration and happens in multiple forms. Emotional Abuse and the Impact of Absence. So often we think of abuse as something that happens to us, but have you ever thought about what it means to a person who suffers from the abuse of omission? 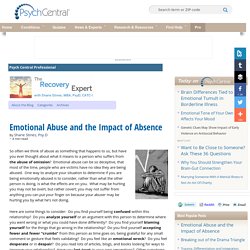 Emotional abuse can be so deceptive, that most of the time, people who are victims have no idea they are being abused. One way to analyze your situation to determine if you are being emotionally abused is to consider, rather than what the other person is doing, is what the effects are on you. What may be hurting you may not be overt, but rather covert; you may not suffer from anything you can put your finger on because your abuser may be hurting you by what he’s not doing. Here are some things to consider: Do you find yourself being confused within this relationship? Do you analyze yourself or an argument with this person to determine where you went wrong or what you could have done differently? When in a relationship with someone who has a personality disorder or is emotionally abusive, there are many things that are missing.

Toxic Relationships. Manipulator. Harassment. Emotional Balance. Mental Health. The Silent Treatment And What You Can Do To Stop It Cold. One of the more frustrating passive-aggressive tactics to those on the receiving end is “the silent treatment”. 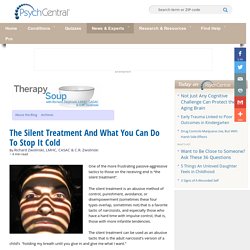 The silent treatment is an abusive method of control, punishment, avoidance, or disempowerment (sometimes these four types overlap, sometimes not) that is a favorite tactic of narcissists, and especially those who have a hard time with impulse control, that is, those with more infantile tendencies. The silent treatment can be used as an abusive tactic that is the adult narcissist’s version of a child’s “holding my breath until you give in and give me what I want.” It is one of the most frustrating tactics and can provoke even the most patient person. How to Tell Emotional Neglect From Emotional Abuse in a Relationship. Let’s face it, relationships are complicated. 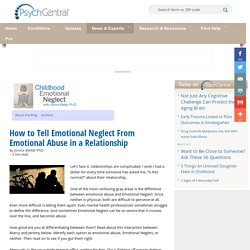 I wish I had a dollar for every time someone has asked me, “Is this normal?” About their relationship. One of the most confusing gray areas is the difference between emotional abuse and Emotional Neglect. Since neither is physical, both are difficult to perceive at all. Even more difficult is telling them apart. How good are you at differentiating between them? Marcy sits in the car outside Jeremy’s office, waiting for him.

Option 1: “Hi, Hon,” he says perkily, kissing her on the cheek. Option 2: “Where were you?!” Option 3: Jeremy sees the angry look on Marcy’s face before she says a word. Highly Sensitive Person.