Slavery at its worst in Africa; U.S. is no saint either. JOHANNESBURG — Slavery persists in the world. 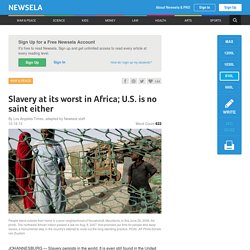 It is even still found in the United States, a new report said Thursday. But nowhere is it worse than in Africa. Nearly 30 million people are enslaved around the world, according to the Global Slavery Index. Of the 50 countries where slavery is at its worst, 38 are in Africa, it said. Mauritania has the poorest record. Many West African countries have slavery. Children Bought And Sold West Africa has a long, sad history of slavery. The index was created by anti-slavery group Walk Free Foundation. In many African countries, children are sold into labor by poor rural parents. The risks of becoming a slave are high in many African countries, the report said. Governments look the other way when children are forced into marriages. Mauritania's Poor Record As many as one-fifth of the people in Mauritania are slaves, according to a group there interviewed by the Walk Free Foundation.

Report says children are getting sick working on American tobacco farms. RICHMOND, Va. — To buy cigarettes, you have to be at least 18 years old. 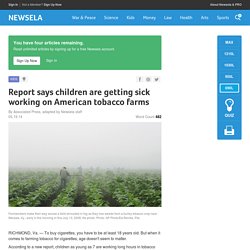 But when it comes to farming tobacco for cigarettes, age doesn't seem to matter. Despite efforts, child labor abuse hasn't stopped on cocoa farms. WASHINGTON — Without cocoa, there would be no chocolate. 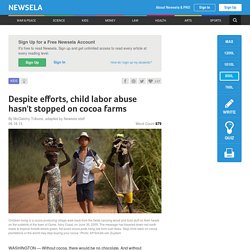 And without companies like Cargill Inc., Americans might not be able to enjoy as many cocoa-based products as they do. Cargill produces and trades cocoa, along with many other foodstuffs like grains and livestock. While cocoa brings delight to many children around the world who eat, it can mean hard work and a dim future for those who must work on cocoa farms. Big companies like Cargill are trying to stop child labor abuses in the cocoa trade. At the same time, they still want to keep production high. To meet the demand, farmers seek cheap child labor. Millions Of Children Companies have made many attempts to cure the child labor problem. Slavery at its worst in Africa; U.S. is no saint either. Group pushes to protect children working on U.S. tobacco farms. RICHMOND, Va. — You have to be at least 18 to buy cigarettes in the U.S. 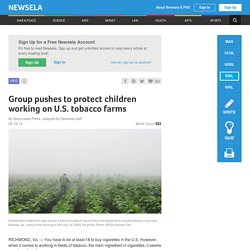 However, when it comes to working in fields of tobacco, the main ingredient in cigarettes, it seems age doesn't matter. According to a new report, children as young as 7 are working long hours in tobacco fields. They are toiling under sometimes hazardous and sweltering conditions. The tobacco leaves they harvest are laced with nicotine and pesticides. The new report, from a group called Human Rights Watch, is based on interviews with more than 140 children. The group admits that most of what it documented is legal under U.S. law. Covered With Chemicals "The U.S. has failed America's families," said report co-author Margaret Wurth. Children interviewed by the group said they sometimes felt sick while working on tobacco farms. The children also said they worked long hours — often in extreme heat — without overtime pay or sufficient breaks.

Urging Companies To Help Still, those efforts have only gone so far. School just a dream for many Afghan children, working hard for low pay. KABUL, Afghanistan — Thirteen-year-old Sami Rahimi gets up at 5 a.m. 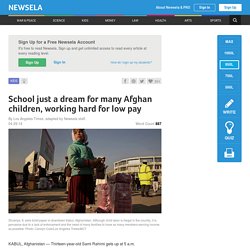 Before the sun has even risen, Sami is pushing a dented wheelbarrow through the dark streets. He gathers water from a well and takes it back to the bakery where he works. By 6 a.m., the stone oven is glowing a fiery red. Dough is flung against the oven's curved walls. It bakes into the flat loaves known as khasa and the round loaves called kamachi. Rahimi sweeps up and then sits cross-legged to begin the long hours of selling each loaf. Working until dark six days a week, Sami earns about $80 a month. Sami has been at the bakery since he was 10. “I’m happy I can support my family, but I would rather go to school and be an educated person,” Sami says.

Nobel Peace Prize Boosts Battle to End Child Labor. (New York) – The awarding of the 2014 Nobel Peace Prize to Indian child rights activist Kailash Satyarthi recognizes the hard fight against child labor and should serve as a call to address this challenge around the globe, Human Rights Watch said today. 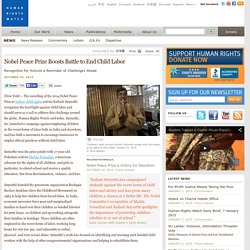 Satyarthi, 60, launched a campaign against employing children in the worst forms of labor both in India and elsewhere, and has built a movement to encourage businesses to employ ethical practices without child labor. Satyarthi won the prize jointly with 17-year-old Pakistani activist Malala Yousafzai, a tenacious advocate for the rights of all children, and girls in particular, to attend school and receive a quality education, free from discrimination, violence, and fear. Satyarthi founded the grassroots organization Bachpan Bachao Andolan (Save the Childhood Movement) in 1983 to help free children from forced labor.