Did Hasidic Neighbor Start Sex Abuse Reign of Terror on September 11? - News. A man testified that he suffered years of child sexual abuse after visiting a respected member of his upstate New York Hasidic community for comfort on the day of the September 11 terror attacks. 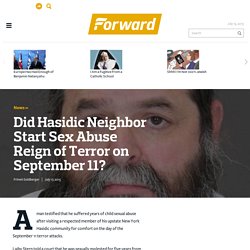 Laiby Stern told a court that he was sexually molested for five years from 2001 until his bar mitzvah by Moshe Menachem Taubenfeld, whom he described as one of “the most powerful men” in his Skverer Hasidic-dominated Rockland County community of New Square. Stern told a packed courtroom that Taubenfeld first molested him when the boy sought reassurance after after hearing about the attacks on the World Trade Center on September 11, 2001.

“He called me into his office, closed the door and told me to pull my pants and underpants down,” Stern, now 22, recounted multiple times during his testimony, pausing regularly to regain his composure. Taubenfeld then allegedly proceeded to rub the boy’s penis. “He then told me to lay flat on the desk and inserted a finger in my anus,” he told the rapt courtroom. 3 Israeli-American Children Sent to Juvenile Detention — for Refusing To Talk to Dad - News. A family court judge has sent three Israeli-American children to a juvenile detention center for refusing to speak to their father. 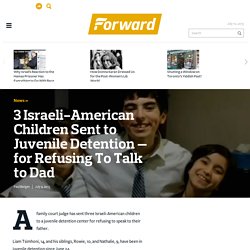 Liam Tsimhoni, 14, and his siblings, Rowie, 10, and Nathalie, 9, have been in juvenile detention since June 24. Judge Lisa Gorcyca, of Oakland County family court in Michigan, threatened to detain all three children until they turn 18 — unless they start speaking to their father. The children have been at the center of a divorce and now a custody battle raging for five years between Maya and Omer Tsimhoni, both originally from Israel. Maya Tsimhoni told FOX 2 news that she felt as though she was watching her children being “executed” as they were sent away. “No matter how bad the divorce gets, I think the court should not punish the kids for that,” Tsimhoni said. 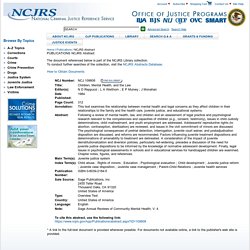 Office of Justice Programs Contact Us | Feedback | Site MapFreedom of Information Act | Privacy Statement | Legal Policies and DisclaimersUSA.gov | CrimeSolutions.govDepartment of Justice | Office of Justice Programs. 19921892422. Abstract The book is fundamentally based on the idea that urban environments can be managed to support human development, and that from the perspective of urban design, the most obvious point of intervention seems to be the environment of childhood. 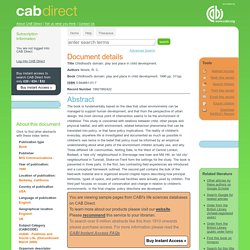 This study is concerned with relations between child, other people and physical habitat, and with environment, related behaviour phenomena that can be translated into policy, or that have policy implications. The Battered-Child Syndrome. Guide. Advocacy ⋆ Kempe. Statistics & Research. Using information collected through various monitoring and reporting systems, the Children's Bureau analyzes and reports data on a variety of topics, including adoption, foster care, and child abuse and neglect. 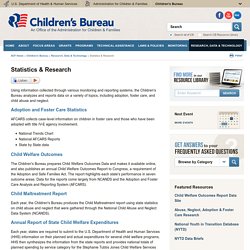 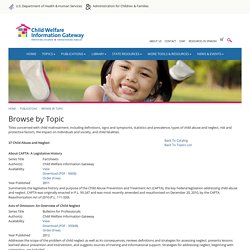 See a list of all Child Maltreatment Reports. Preventing Child Abuse & Neglect - Child Welfare Information Gateway. National Child Abuse Prevention Month 2015. Kempe Foundation marks 30 years against child abuse. Interview with John Faught More than 10,000 children were abused or neglected in Colorado in 2013, according to the Kempe Foundation for the Prevention and Treatment of Child Abuse and Neglect. 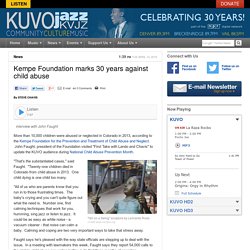 John Faught, president of the Foundation visited "First Take with Lando and Chavis" to update the KUVO audience during National Child Abuse Prevention Month. "That's the substantiated cases," said Faught. "Twenty-one children died in Colorado from child abuse in 2013. One child dying is one child too many. "All of us who are parents know that you run in to those frustrating times. Faught says he's pleased with the way state officials are stepping up to deal with the issue. The_Battered_Child_Syndrome. Who We Are ⋆ Kempe. 0000510. Untitled. The revolving door of King Henry VIII’s wives and mistresses is, of course, the exception, rather than the rule of Tudor family life. 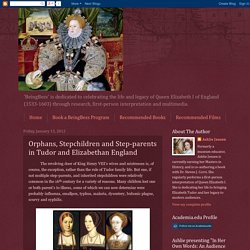 But one, if not multiple step-parents, and inherited stepchildren were relatively common in the 16th century for a variety of reasons. Many children lost one or both parent’s to illness, some of which we can now determine were probably influenza, smallpox, typhus, malaria, dysentery, bubonic plague, scurvy and syphilis. In 1599 in Ealing (West London), ¼ of all children had lost at least one natural parent, if not both. Step-parents were common, particularly if the surviving spouse was still able to produce more children, or if a male heir was lacking; therefore they would have good reason to marry again. But sometimes people simply remarried again for love late in life, such as the great Elizabethan matriarch Bess of Hardwick. Sometimes, children were fostered by family members, including when a parent was still alive. Negotiating Power in Early Modern Society: Order, Hierarchy and ... Psalter. - Medieval and Renaissance Manuscripts. 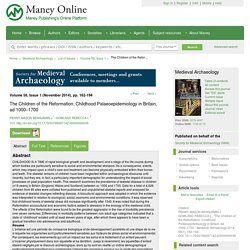 It aims to serve as a medium for co-ordinating the work of archaeologists with that of historians and scholars in any other discipline relevant to this field. While maintaining a special concern for the medieval archaeology of Britain and Ireland, the Society seeks to support and advance the international study of this period. The journal provides a forum for the discussion of important finds and developments within this period from anywhere in the world. Volumes 1-50 of Medieval Archaeology are available online via the Archaeology Data Service (ADS). Click here to view. In Samuel's Image: Child Oblation in the Early Medieval West - Mayke De Jong.