Population and migration in Asia - Revision 2 - KS3 Geography - BBC Bitesize. In 1979, the One Child Rule was introduced in China. 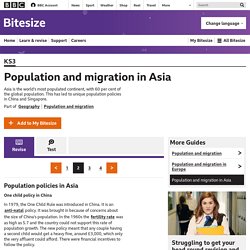 It is an anti-natal policy. Population of China 1952 - PopulationPyramid.net. Io9.gizmodo. See How the One-Child Policy Changed China. China's decision to lift its one-child policy next year is expected to diversify the country’s aging, increasingly male population. 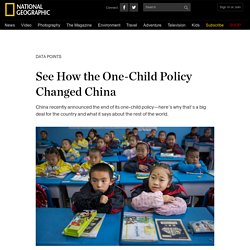 But the degree to which the policy has affected the country of more than 1.3 billion people is hard to imagine. Here are five charts and maps that help illustrate it. Population Control The nearly 40-year-old restriction on having multiple children isn't the only time the Chinese government stepped into family planning. Shortly after the establishment of the People’s Republic of China in 1949, Mao Zedong encouraged the population to multiply and create manpower. The success was short lived. 5 things to know about China's 1-child policy. China's ruling Communist Party announced Thursday that all couples will be allowed to have two children, ending the country's decades-old, unpopular one-child policy that has risked becoming a demographic burden as the population ages. 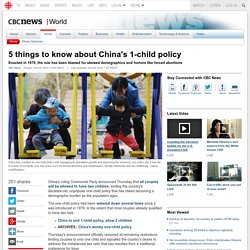 The one-child policy had been watered down several times since it was introduced in 1979, to the extent that most couples already qualified to have two kids. Thursday's announcement officially removed all remaining restrictions limiting couples to only one child and signalled the country's desire to address the imbalanced sex ratio that has resulted from a traditional preference for boys. Here are five things to know about the world's most ambitious population-control policy: 1. Why was the 1-child policy created? China, which has the world's largest population at 1.4 billion people, introduced the policy in 1979 as a temporary measure to curb a then-surging population and limit the demands for water and other resources. 2.

China's village of the bachelors: no wives in sight in remote settlement. He wants a wife, of course. 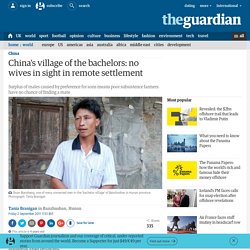 But ask what kind of woman he seeks and Duan Biansheng looks perplexed. "I don't have any requirements at all," said the 35-year-old farmer. "I would be satisfied with just a wife. " His prospects of finding one, he added, are "almost zero". There are dozens of single men in Banzhushan village, perched high on a remote mountain peak in central Hunan province – and not one unattached woman of marriageable age. Tens of millions of men across China face a future as bachelors. Duan worries about growing old with no one to care for him. This is the perverse outcome of the country's longstanding preference for sons, and its sudden modernisation. Having a boy is a cultural and a pragmatic choice: you expect him to continue your lineage and support you in old age. Sex-selective abortion is illegal, but is clearly widely practised.

The normal human birth ratio is 106 males for every 100 females. It is equivalent to every male in the UK dying a bachelor. How China’s One-Child Policy Backfired Disastrously. China's one-child policy was aimed at slashing the nation's population to boost economic growth. 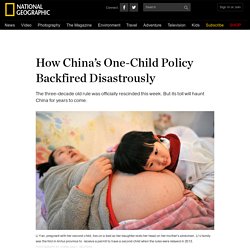 It resulted in millions of forced sterilizations, abortions, infanticide, and marital misery. After more than 30 years, the Central Committee of China’s Communist Party announced Thursday that it would end the rule, easily the country's most unpopular. Mei Fong, a former Pulitzer Prize-winning Wall Street Journal reporter, is author of the forthcoming book One Child: The Past And Future Of China’s Most Radical Experiment. Speaking from California, she describes how the policy caused an enormous demographic headache for China; why it will take decades to reverse; and how, as a result, China is full of lonely men. Why has China made this decision now? The reason China is doing this right now is because they have too many men, too many old people, and too few young people. China has lifted 600 million people out of poverty. Journalists love that phrase. China ends one-child policy after 35 years. China has scrapped its one-child policy, allowing all couples to have two children for the first time since draconian family planning rules were introduced more than three decades ago. 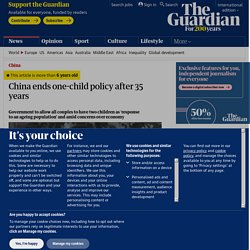 The announcement followed a four-day Communist party summit in Beijing where China’s top leaders debated financial reforms and how to maintain growth at a time of heightened concerns about the economy. China will “fully implement a policy of allowing each couple to have two children as an active response to an ageing population”, the party said in a statement published by Xinhua, the official news agency. “The change of policy is intended to balance population development and address the challenge of an ageing population,” Some celebrated the move as a positive step towards greater personal freedom in China.

But human rights activists and critics said the loosening – which means the Communist party continues to control the size of Chinese families – did not go far enough. Additional reporting by Luna Lin. Nanfu Wang: What it was like to grow up under China's one-child policy.