The Pernicious, Persistent Myth That Games Will Break Our Brains. “Video games cause ADHD.” 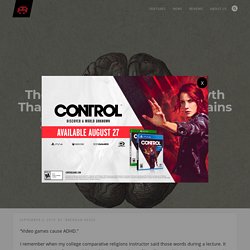 I remember when my college comparative religions instructor said those words during a lecture. It certainly wasn’t the first time I’d heard the claim—a host of headlines, politicians, and “advocates” in special interest groups have parroted it and similar myths about video games for decades—but that didn’t make it any less frustrating. For those of us who live with ADHD and other forms of neuroatypical cognition—such as autism spectrum disorder (ASD), dyslexia, and epilepsy, to name a few—the idea that gaming is what “causes” atypical neurocognitive behavior is not only in direct contrast to our lived experiences, it’s also pseudo-scientific. The reality is that being neurodivergent can be a major inhibitor to enjoying hobbies like video games, and it makes simple life tasks much more difficult to complete. Before we get too far, let’s define what ADHD even is.

Minecraft is probably the best example. For Frebe, accessibility is a major concern. Gamers Have More Grey Matter And Better Brain Connectivity, Study Suggests. As someone who has just gotten into their first MMO, only to clock an unseemly amount of hours within the first few months, I’m no stranger to the guilt that can come from habitual gaming. 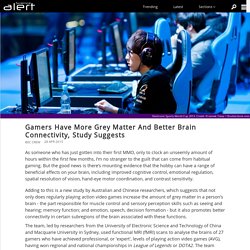 But the good news is there’s mounting evidence that the hobby can have a range of beneficial effects on your brain, including improved cognitive control, emotional regulation, spatial resolution of vision, hand-eye motor coordination, and contrast sensitivity. Adding to this is a new study by Australian and Chinese researchers, which suggests that not only does regularly playing action video games increase the amount of grey matter in a person’s brain - the part responsible for muscle control and sensory perception skills such as seeing and hearing; memory function; and emotion, speech, decision formation - but it also promotes better connectivity in certain subregions of the brain associated with these functions. Credit: Diankun Gong et. al. Scientific Reports Source: Real Clear Science. Playing 3-D video games can boost memory formation: Results suggest novel approaches to maintaining cognition as we age.

Don't put that controller down just yet. 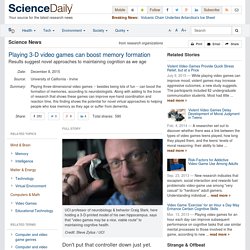 Playing three-dimensional video games -- besides being lots of fun -- can boost the formation of memories, according to University of California, Irvine neurobiologists. Along with adding to the trove of research that shows these games can improve eye-hand coordination and reaction time, this finding shows the potential for novel virtual approaches to helping people who lose memory as they age or suffer from dementia. Study results appear Dec. 9 in The Journal of Neuroscience. For their research, Craig Stark and Dane Clemenson of UCI's Center for the Neurobiology of Learning & Memory recruited non-gamer college students to play either a video game with a passive, two-dimensional environment ("Angry Birds") or one with an intricate, 3-D setting ("Super Mario 3D World") for 30 minutes per day over two weeks. Students playing the 3-D video game improved their scores on the memory test, while the 2-D gamers did not.

Gabe Zichermann: How games make kids smarter. Daphne Bavelier: Your brain on video games. Activities For Children. The importance of outdoor play By Kidspot team | The sight of children playing in the streets seems to be long gone in many parts of Australia, but the wane of outdoor play also means losing many of the learning benefits. 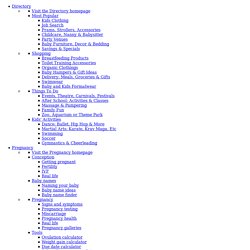 The great outdoors is one of the oldest play places in the world, where children play some of the most interesting games. Playing outside today is rare as children: Spend more time indoors in front of the television or computer and being ferried everywhere in the car. The fun of outdoor play Besides being out in the fresh air, one of the big benefits of outdoor play versus indoor play is being free from parental and adult constraints. Understand complex speech and language patterns like phonology, lexis, grammar and syntax Develop more complex skills around friendships and social engagement. The Need for Pretend Play in Child Development - Beautiful Minds - Scientific American Blog Network. [This post was co-authored with Jerome L. 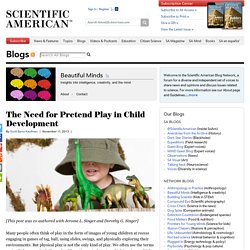 Singer and Dorothy G. Educational Games - How they help in Child Development. A Surprising New Study On How Video Games Impact Children. The Positive and Negative Effects of Video Games - Raise Smart Kid. 10 Baby Game Ideas for Baby’s First Year. Fun baby games that can boost your child's skills and development don't need to be complicated. 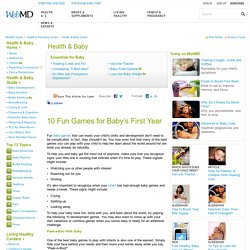 In fact, they shouldn't be. You may even find that many of the best games you can play with your child to help her learn about the world around her are what you already do naturally. To help you and baby get the most out of playtime, make sure that you recognize signs your little one is sending that indicate when it's time to play. These signals might include: Watching you or other people with interest Reaching out for you Smiling It's also important to recognize when your infant has had enough baby games and needs a break.

Crying Spitting up Looking away To help your baby have fun, bond with you, and learn about the world, try playing the following 10 development games. 20 fun, silly, development-boosting games to play with your baby. When we first brought our baby home, we were stricken with terror. 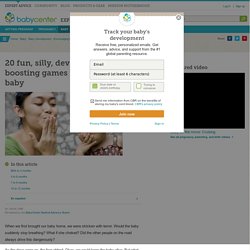 Would the baby suddenly stop breathing? What if she choked? Did the other people on the road always drive this dangerously? As the days wore on, the fear ebbed. Okay, we could keep the baby alive. Now that we both know a lot more about babies — or at least our baby — we know not to expect a lot of interaction from a newborn. From day one, your baby's interested in what's going on around him. A little video gaming 'linked to well-adjusted children' Lack of outdoor play said to hurt children's development - Windsor. 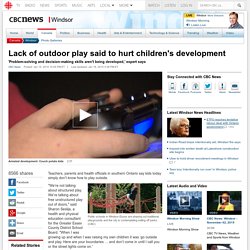 Public schools in Windsor-Essex are phasing out traditional playgrounds and the city is contemplating selling off parks. (CBC) "We’re not talking about structured play. We’re talking about free unstructured play out of doors," said Sharon Seslija, a health and physical education consultant for the Greater Essex County District School Board. "When I was growing up and when I was raising my own children it was ‘go outside and play. "So, the kids developed imagination, played with kids in the neighbourhood and developed problem solving skills. Video Games Effects on Child Development. Effect of Video Games on Child Development. Danielle Dai and Amanda Fry Little bit o’ history If you are a parent in this era of information and technology, chances are you have a child who has played, is playing, or will be playing video games. 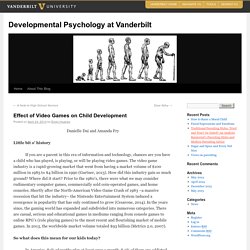