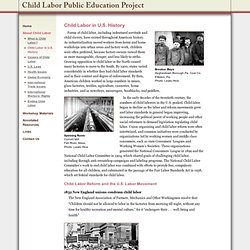 Coal Co. Pittston, Pa. Photo: Lewis Hine Forms of child labor, including indentured servitude and child slavery, have existed throughout American history. Spinning Room Cornell Mill Fall River, Mass. In the early decades of the twentieth century, the numbers of child laborers in the U.S. peaked. Child Labor Reform and the U.S. Slavery in the Chocolate Industry. Chocolate is a product of the cacao bean, which grows primarily in the tropical climates of Western Africa, Asia, and Latin America.[1] The cacao bean is more commonly referred to as cocoa, so that is the term that will be used throughout this article. 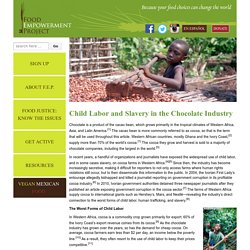 Western African countries, mostly Ghana and the Ivory Coast,[2] supply more than 70% of the world’s cocoa.[1] The cocoa they grow and harvest is sold to a majority of chocolate companies, including the largest in the world.[3] In recent years, a handful of organizations and journalists have exposed the widespread use of child labor, and in some cases slavery, on cocoa farms in Western Africa.[4][5] Since then, the industry has become increasingly secretive, making it difficult for reporters to not only access farms where human rights violations still occur, but to then disseminate this information to the public. 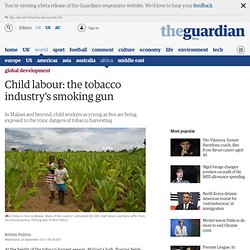 Some can count their age on one hand. Child-labor rules could limit what kids are allowed to do on farms. GRAND RIDGE, Ill. – Tossing hay into cattle pens is the first chore Austin Walter remembers doing on his parents' farm. 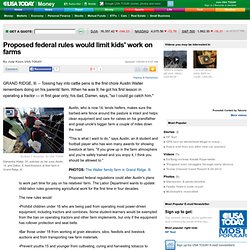 When he was 9, he got his first lesson in operating a tractor — in first gear only, his dad, Darren, says, "so I could go catch him. " Austin, who is now 14, tends heifers, makes sure the barbed-wire fence around the pasture is intact and helps clean equipment and care for calves on his grandfather and great-uncle's bigger farm a couple of miles down the road. News In-depth: Child Labor. Voices From the Field: Mexico By Karen Fanning Each day, Audelia heads to work on a tobacco farm in Santiago Ixcuintla Nayarit, Mexico. 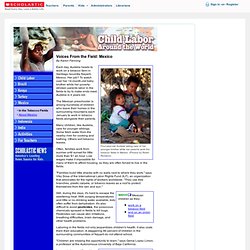 Her job? To watch over her 14-month-old baby brother while her poverty-stricken parents labor in the fields to try to make ends meet. Audelia is 4 years old. The Mexican preschooler is among hundreds of children who leave their homes in the surrounding mountains each January to work in tobacco fields alongside their parents. Pitting Child Safety Against the Family Farm. LAST month, a proposal by the United States Department of Labor to prevent children under age 16 from working in dangerous farm jobs ignited a firestorm in conservative media outlets. 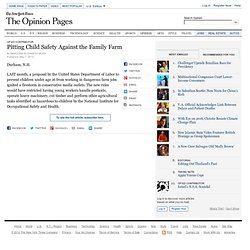 The new rules would have restricted having young workers handle pesticide, operate heavy machinery, cut timber and perform other agricultural tasks identified as hazardous to children by the National Institute for Occupational Safety and Health. Conservatives quickly went on the attack. Senator Jerry Moran, a Kansas Republican, argued that “if the federal government can regulate the kind of relationship between parents and their children on their own family’s farm, there is almost nothing off-limits in which we see the federal government intruding in a way of life.” Fox News posted a story entitled, “Team Obama Wants Children Banned from Doing Farm Chores.”

This is not the first time reform of agricultural child labor laws has been beaten back by a supposed threat to the family farm. Child slavery and chocolate: All too easy to find. In "Chocolate's Child Slaves," CNN's David McKenzie travels into the heart of the Ivory Coast to investigate children working in the cocoa fields. 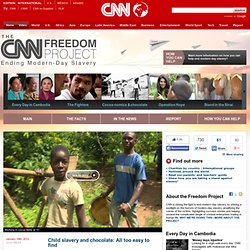 Abdul is 10 years old, a three-year veteran of the job. He has never tasted chocolate. Farm And Ranch Kids Get Opportunity To Work. Growing up, my younger sisters and I were Dad’s chore help. 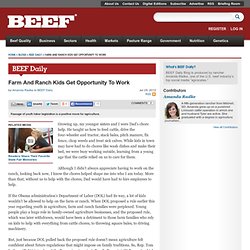 He taught us how to feed cattle, drive the four-wheeler and tractor, stack bales, pitch manure, fix fence, chop weeds and treat sick calves. While kids in town may have had to do chores like wash dishes and make their bed, we were busy working outside, learning from a young age that the cattle relied on us to care for them. Although I didn’t always appreciate having to work on the ranch, looking back now, I know the chores helped shape me into who I am today. More than that, without us to help with the chores, Dad would have had to hire employees to help. If the Obama administration’s Department of Labor (DOL) had its way, a lot of kids wouldn’t be allowed to help on the farm or ranch.

But, just because DOL pulled back the proposed rule doesn’t mean agriculture felt confident about future regulations that might impose on family traditions. What do you think of the legislation? Iqbal Masih. Iqbal Masih (Punjabi, Urdu: اقبال مسیح‎; b. 1983, d. 16 April 1995) was a Pakistani child who became a symbol of abusive child labor in the developing world. 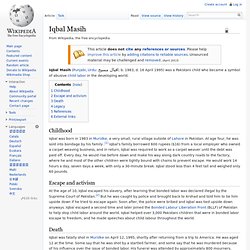 Childhood Iqbal was born in 1983 in Muridke, a very small, rural village outside of Lahore in Pakistan. At age four, he was sold into bondage by his family .[1] Iqbal's family borrowed 600 rupees ($16) from a local employer who owned a carpet weaving business, and in return, Iqbal was required to work as a carpet weaver until the debt was paid off. Every day, he would rise before dawn and make his way along dark country roads to the factory, where he and most of the other children were tightly bound with chains to prevent escape.

He would work 14 hours a day, seven days a week, with only a 30-minute break. Escape and activism Death. What is child labor?(Cover story) - Faces: People, Places, and Cultures.

PSAs. Child Labor in the Middle East - Modern Day Slavery. Your are absolutely going to be stunned. 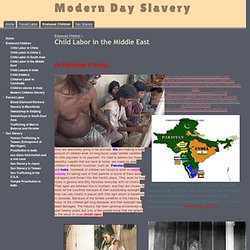 We are making a huge amount of children work for long hours under terrible condition for little payment or no payment. It's hard to believe but those beautiful carpets that we have at home, are made by poor children in Western countries; such as, Pakistan and India. Hundreds of children are forced to work in carpet industy for taking care of their parents or some of them were kidnapped and thrown into this horrific place. They work for long hours in gloomy and dirty factories everyday with no choice.

Their ages are between five to fourteen, and they are chosen to work for the countries because of their outstanding eyesight; they can see clearly in places with little light which is beneficial to factories. HOW are they caught??? WHAT's going on??? The caught children would be locked in a room and given no food until they agree to weave on the looms. Emancipation Proclamation: