The little-known story of when Perth banned Indigenous people from the city and suburbs. Updated about 4 hours agoSun 29 Dec 2019, 12:23am "Natives Gaoled: In Prohibited Area" declared the headline in The West Australian newspaper. 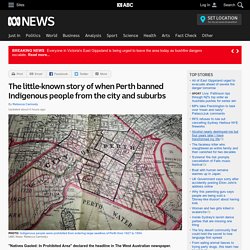 It was back in 1947 and a dark chapter in Western Australia's history — a time when Indigenous people were not allowed to walk the streets of Perth without a permit, or a "Native Pass". Roman army samples 2019. Constitutional Centre - Year 6. Australia's system of government and citizenship ​Students continue building on their understanding of the concepts of justice, rights and responsibilities, and the Westminster system. 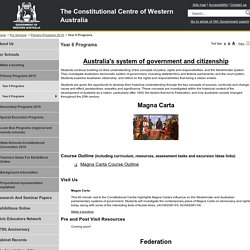 They investigate Australia's democratic system of government, including state/territory and federal parliaments, and the court system. Students examine Australian citizenship, and reflect on the rights and responsibilities that being a citizen entails. Students are given the opportunity to develop their historical understanding through the key concepts of sources, continuity and change, cause and effect, perspectives, empathy and significance. These concepts are investigated within the historical context of the development of Australia as a nation, particularly after 1900; the factors that led to Federation; and how Australian society changed throughout the 20th century. Magna Carta.

Roman Architecture. Roman architecture continued the legacy left by the earlier architects of the Greek world, and the Roman respect for this tradition and their particular reverence for the established architectural orders, especially the Corinthian, is evident in many of their large public buildings. However, the Romans were also great innovators and they quickly adopted new construction techniques, used new materials, and uniquely combined existing techniques with creative design to produce a whole range of new architectural structures such as the basilica, triumphal arch, monumental aqueduct, amphitheatre, granary building, and residential housing block. Education resources for schools teachers and students - ABC Education. Critical Use of Sources. Onedrive.live. Onedrive.live. Critical Use of Sources. An Incredibly Detailed Map Of Medieval Trade Routes. Martin Luther and the German Reformation.

Dictators inroduction 2018. Geraldton Historical Society. World's scientists turn to Asia and Australia to rewrite human history. Where did we humans come from? 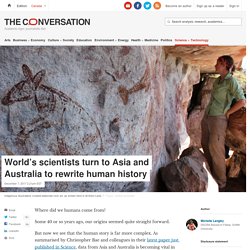 Some 40 or so years ago, our origins seemed quite straight forward. But now we see that the human story is far more complex. As summarised by Christopher Bae and colleagues in their latest paper just published in Science, data from Asia and Australia is becoming vital in piecing this new history together. Zoom using +/- and click on each site to view more information. The box at top left can also be used to navigate through the evidence. Read more: Curious Kids: Where did the first person come from? The original story went something like this: modern humans (Homo sapiens) evolved to their current anatomical form in sub-Saharan Africa sometime after 200,000 years ago.

Arriving in Western Europe, a “human revolution” soon occurred (40,000 years ago), resulting in our much celebrated artistic and complex language abilities, a sort of creative explosion. But fresh evidence has forced a rethink of this version of human history. Modern humans. 14_century_BC_Eastern1. Archaeologists home in on Homeric clues as Turkey declares year of Troy. Rüstem Aslan, Troy’s chief archaeologist, grows more animated as he enters the fenced-off area just beyond the southern gate of the ancient city’s ruins. 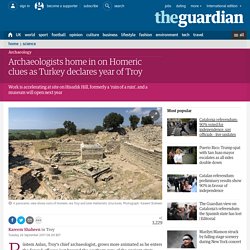 To him it offers tantalising clues that may add to the evidence that this was the scene of the war detailed in Homer’s epics, the Iliad and the Odyssey. “Priam, Achilles, Hector: [whether] they lived and died here, we cannot prove that 100%,” said the affable Aslan, who started working at the site as a student in 1988. “But if you work inside for 30 years, night and day, winter or summer, surrounded by this landscape, you can feel it. Teacher Notes\8384598 36660. 20130430 indigenousanzacs. On this day in history.

ON JULY 7, 1835, a bearded giant wearing animal skins and carrying spears emerged from the Australian bush. 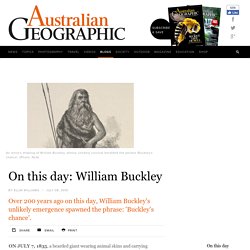 And it was Buckley's chance that he was there. It's been over 200 years since escaped convict William Buckley handed himself over to explorer John Batman's landing party. My grandfather died fighting for Hitler. What should we make of his legacy? Was the First Crusade really a war against Islam? Gallipoli: Drone video of WWI battlefield - BBC News. Australian Christian History Research Institute - Founding Fathers, Early Christian History, Australian History, Australian Heritage. Half a millennium later the Reformation still shapes our world. It began 500 years ago this year. 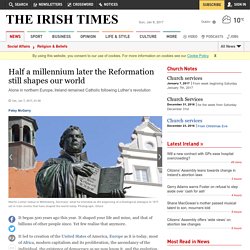 NCHE. In the practical schedule of the elementary day, I fundamentally was asking this: Should we have 2-hour blocks for reading and 90 minute blocks for writing with some history and other content sprinkled in and relegated to a few 30 minute sections per week? 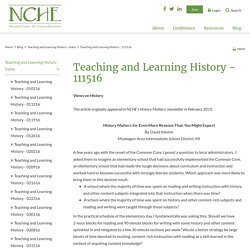 Would a better strategy be large blocks of time devoted to exciting, content-rich instruction with reading as a skill learned in the context of acquiring content knowledge? Many looked at me as if I had lost my mind. Over a decade down the road from No Child Left Behind, many educators, including those in administration, have spent their entire careers knowing no other federal education policy than one that relegated history and other content-rich subjects to a back burner. My question was a non-starter for many; if you want better readers and writers, you need to spend more time on reading and writing they reasoned. Everyone knows that. 25 maps that explain the English language. English is the language of Shakespeare and the language of Chaucer.

It’s spoken in dozens of countries around the world, from the United States to a tiny island named Tristan da Cunha. The G Word: Australian reactions to Gallipoli. The word Gallipoli is often tied to concepts of mateship, heroism and nationhood. 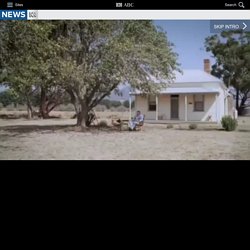 But what does the Anzac story really mean to Australians today? We showed 16 people videos related to Gallipoli and filmed their responses. Resource – Source Analysis. Last month on twitter I spotted this post and knew I could make use of this idea. 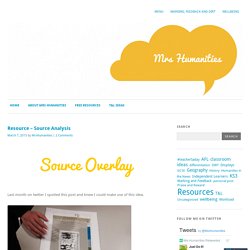 I responded to the tweet and they very kindly sent me a copy of their source analysis overlay along with the original idea by @russelltarr aka @activehistory. I immediately made my own version following the inspiration. It’s quite simple to create the overlay, you just cut out the ‘white’ area of your printed sheets and laminate or pop them into a plastic wallet like I did. I’ve used the idea twice so far.

MAN OF PEACE AMONGST THE RUINS - Australia in the Great War. Kindly Shared by our community member Allan Fuary I was the only Senior Chaplain to serve throughout the entire war from 1914 until my discharge in 1920, when I returned to Australia and spent the next 3 months Travelling & Lecturing on “Glimpses of Gallipoli” & “Chaplaincy Cameos”. LIEUTENANT COLONEL (Chaplain 1st Class) THE REV FREDERICK JAMES MILES DSO OBE VD MID At the age of 15 I enlisted for fun in the part-time Militia in England and quickly rose to the rank of Sergeant.