Water in the World

Related to Year 7 Geography Unit 'Water in the World'

Water in the World 2 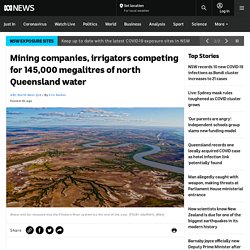 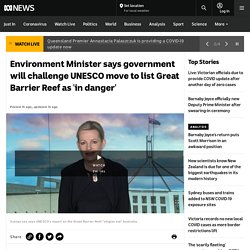 Key points: The World Heritage Committee will consider the recommendation at a meeting in China next monthMs Ley says the draft decision was made without the latest information on the health of the ReefA marine expert says the government should not be surprised by the recommendation The World Heritage Committee, which sits under UNESCO, has proposed moving the reef to the list because of the impact of climate change, and will consider the decision at a meeting in China, which is the chair, next month. Ms Ley described the decision as a "backflip" and said United Nations officials had assured the government the reef would not face this kind of recommendation before the July meeting. Tasmanian town Rossarden takes out best water award at event deemed Olympics of water. A former mining town in Tasmania's north-east has taken out top honours at an international water judging event deemed the Olympics of water. 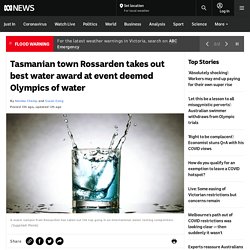 Key points: Rossarden, in Tasmania's north-east, has won an international award for Best Municipal WaterThe town's water has improved in three years from undrinkable to world classThe Berkeley Springs International Water Tasting event is held annually in the US. Environmental concerns mount amid the rise of cotton growing in Northern Territory. On Douglas Station south of Darwin, a 200-hectare rain-fed cotton field is ready to be picked and spun into lucrative bales, part of a national crop worth $1.5 billion this season. 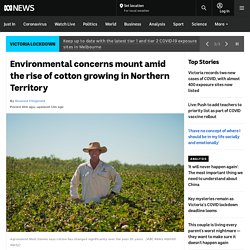 Key points: Cotton is at the centre of a predicted agricultural boom across Australia’s northThe NT Farmers Association says it has plans to develop 60,000 hectares of cotton and extract 520 gigalitres of water Environmentalists are raising concerns and Aboriginal traditional owners want to be consulted "Cotton is going to be a game changer for the Northern Territory," says part-owner Matt Dennis, standing on a dusty road at the edge of the crop.

Just three years after trials began in the Territory, cotton is at the centre of a predicted agricultural boom across Australia's north tipped to be worth more than $200 million within a decade. RV Investigator marks end of weeks-long voyage studying impacts of warming East Australian Current. For more than three weeks, the CSIRO's leading ocean research vessel RV Investigator has trawled the length of Australia's eastern coastline gathering data on the East Australian Current (EAC). 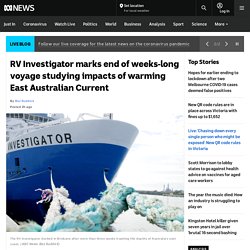 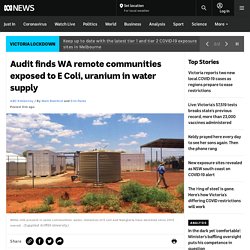 Key points: The Auditor-General report on essential services for Indigenous communities delivers mixed resultsSafe water delivery has improved around WA, but contaminants have still been found in 37 communitiesDepartment accepts all recommendations The study examined water, power and wastewater services in 143 of the state's communities. It was a follow-on from a damning audit in 2015 that found widespread water quality problems, with 80 per cent of communities failing to meet Australian drinking standards due to contamination from substances like E. European carp population set to explode after floods, sparking fears for native species.

European carp numbers are rising as floodwaters expand across the Darling River system, which could spell the end for many native fish. 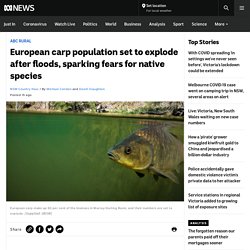 Key points: Carp outcompete native species and already make up 90 per cent of the biomassEfforts to repopulate with native fish population may fail as a result of floodingExperts say a plan to target carp with a virus has been delayed, but there is no single solution While flooding was initially seen as a huge positive for native species after recent mass deaths on the Darling, University of New South Wales ecologist Derrick Cruz said it was a double-edged sword. CSIRO predicts more drought, drastic drop in Murray-Darling basin water.

Data from the CSIRO shows there has been a huge fall in inflows across the Murray-Darling Basin in the past 20 years. 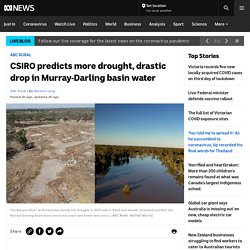 Lower rainfall translates to a big drop in water flowing into streams, rivers and dams across Australia's largest river system. Dr Francis Chiew, a research group leader in water resources assessment and prediction at the CSIRO, said long-term rain trends suggested a significant reduction in water availability in the Murray-Darling system. He said his team applied a "general rule" when rainfall figures fell by 10 per cent. Indigenous groups in Murray-Darling Basin fight to have their voices heard over water rights. "If you came here to this spot when the fish kill was on, all you'd be smelling was stink. 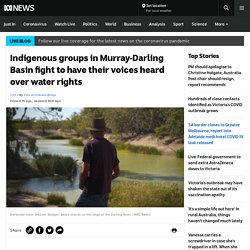 " Barkandji elder William 'Badger' Bates is standing on the edge of the Darling River outside Menindee in New South Wales where, two years ago, more than a million fish washed up dead. The images of Murray cod gasping for air on the riverbank put a national spotlight on the water crisis in far western New South Wales. But it also highlighted an important, yet under-reported, flaw in the Murray-Darling Basin Plan: its failure to recognise the rights of Indigenous people in water management. Space to play or pause, M to mute, left and right arrows to seek, up and down arrows for volume. VicForests conducting more illegal logging and putting Melbourne water catchment at risk, scientists say. Melbourne's most important drinking water catchment has been put at risk by more alleged illegal logging in state forests, experts have said, warning the regulator is failing to keep the logging industry in line. 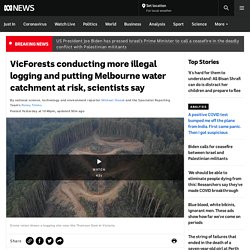 Key points: Logging on slopes steeper than 30 degrees is banned in some water catchment areasVicForests cleared trees on some slopes of nearly 35 degrees in the Thomson catchment, ANU researchers foundThe conservation regulator says it is investigating, but experts say it has been ineffective in the past. Victoria splits from water minister' pack on commitment to Murray-Darling Basin Plan deadlines.

Federal and state Murray-Darling Basin water ministers have pledged to meet a 2024 deadline for a range of water-saving projects, despite reservations from Victoria. Key points: Water ministers reaffirm commitment to Basin Plan deadlines.Victoria warns key projects won't be complete in time.Projects at Menindee Lakes and Yanco Creek to be re-evaluated. A Ministerial Council meeting was held on Thursday morning, with ministers agreeing to re-examine two controversial water savings projects at Menindee Lakes and Yanco Creek.

Federal Water Minister Keith Pitt said he had commissioned an independent report into the progress of all projects, known as the Sustainable Diversion Limit Adjustment Mechanism (SDLAM) projects, which are supposed to lower the overall water recovery target by delivering the environmental outcomes equivalent to 605GL of water buybacks. Floodwater reaches Menindee Lakes for the first time in five years. The floodwaters snaking their way through the Darling-Baaka River system in northern New South Wales have finally made it to the Menindee Lakes, to the delight of the severely drought-affected community. Key points: Community welcomes the return of substantial water flows to the region following prolonged droughtMurray-Darling Basin Authority takes control of the lakes' management when it exceeds 640GLLocals say the birds have already arrived and soon the tourists will follow The Menindee Lakes are a system of nine large, shallow lakes in far-western New South Wales.

New funding to improve water quality in remote NT communities as data shows high contamination levels. The Northern Territory government has announced a $28 million funding package for water quality in remote areas as new data shows water contamination above national guidelines in many Aboriginal communities. Many NT remote communities have water contamination levels above national guidelinesNT Government has announced $28 million to improve remote water qualityWater minister says contaminates have been in groundwater for millions of years The Territory's water supplier Power and Water had not released water quality data for the past two years and only did so on Thursday after multiple requests from the ABC. The data showed that at least 28 remote communities had levels of physical and chemical health parameters above the Australian Drinking Water Guidelines — with Laramba having over 2.8 times the recommended uranium levels.

Key points: Logging on slopes steeper than 30 degrees is banned in some areas protected for drinking water supplyThe Victorian government's conservation regulator found the government-run VicForests breached this law at two locationsThe new breaches are the latest in a long-running string of allegations of illegal logging made against the state-owned company The Office of the Conservation Regulator, a Victorian government body tasked with monitoring the state-owned logging company VicForests, found breaches of the law at two locations last year but decided not to take action. Instead it communicated to VicForests an "expectation" that it would comply with the law in future. Melbourne's drinking water at risk. How two men helped keep the flood-prone town of Goondiwindi dry for 65 years.

Sydney Harbour underwater garden to mimic marine habitats destroyed by pollution - ABC News. Water from Murray-Darling Basin plan not being delivered to wetlands, Australian-first report finds - ABC News. Humpback whales have been spotted in a Kakadu river. So in a fight with a crocodile, who would win? - ABC News. Water resilience: Is a backyard bore a sustainable way to safeguard against drought? - ABC News. The 'loss and devastation' of a relentless drought captured from space. 'Detached' reef bigger than Empire State building discovered in 500 metres of water off Queensland - ABC News.

How banking water underground in aquifers could help guard Australia against future drought. Ex-Tropical cyclone Esther transforms cattle country during loop of the Kimberley - ABC Rural - ABC News. Big businesses set to commit to combating plastics at first national waste summit. Murray-Darling Basin Plan 'in action' after first major break in drought since deal was struck in 2012 - ABC Rural - ABC News. How do you run cattle and sheep in a swamp? This farm has done it for five generations. Grand Designs host Kevin McCloud on toilets, drinking games and selfies. PSP Investments, a Canadian pension fund, could now be the largest owner of water in the Murray-Darling Basin - ABC Rural - ABC News.

On World Wetlands Day, learn more about 'the kidneys' of the environment. Earthquake in Caribbean triggers tsunami warning for Cuba, Jamaica and the Cayman Islands. Do fans make any difference in a heatwave? Rain forces Mount Isa to cancel Australia Day pool party, but the dry river is now flowing. How long until drought-stricken towns run out of water? Darwin River Dam at lowest level since 2006, but NT Government quiet on action. Inside the room as the Murray-Darling's top cop Mick Keelty meets irrigators. Murray-Darling Basin's top cop offers a damning assessment of the federal Agriculture Department - Politics. Millions of dead fish, dry rivers and lakes — so why have Menindee locals decided to stay?