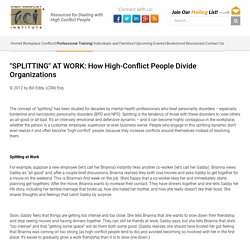 The concept of “splitting” has been studied for decades by mental health professionals who treat personality disorders – especially borderline and narcissistic personality disorders (BPD and NPD). Splitting is the tendency of those with these disorders to view others as all-good or all-bad. It’s an intensely emotional and defensive dynamic – and it can become highly contagious in the workplace, whether the person is a customer, employee, supervisor or even business owner. People who engage in this splitting dynamic don’t even realize it and often become “high-conflict” people, because they increase conflicts around themselves instead of resolving them.

Splitting at Work For example, suppose a new employee (let’s call her Brianna) instantly likes another co-worker (let’s call her Gabby). Soon, Gabby feels that things are getting too intense and too close. Now Brianna flips: she suddenly views Gabby as “all-bad.” Who Are High Conflict People? - High Conflict Institute. By Bill Eddy, LCSW, Esq. 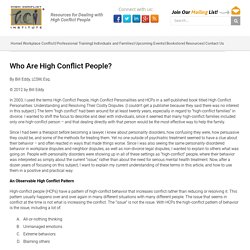 It's All Your Fault - At Work! - High Conflict Institute. © 2012 by Bill Eddy Have you noticed more people engaging in “high conflict” behavior these days at work? 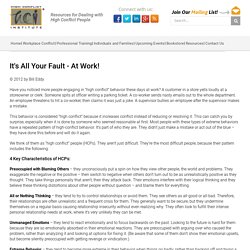 A customer in a store yells loudly at a storeowner or clerk. Someone spits at officer writing a parking ticket. A co-worker sends nasty emails out to the whole department. An employee threatens to hit a co-worker, then claims it was just a joke. This behavior is considered “high conflict” because it increases conflict instead of reducing or resolving it. We think of them as “high conflict” people (HCPs). 4 Key Characteristics of HCPs: Preoccupied with Blaming Others – they unconsciously put a spin on how they view other people, the world and problems.

All or Nothing Thinking – they tend to try to control relationships or avoid them. Unmanaged Emotions – they tend to react emotionally and to focus backwards on the past. Extreme Behavior – they tend to become more extreme in their behavior when things go badly, rather than backing off and trying a different approach. The C.A.R.S. 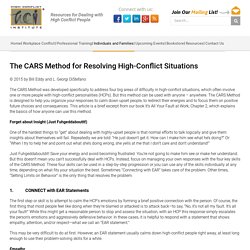 Georgi DiStefano The CARS Method was developed specifically to address four big areas of difficulty in high-conflict situations, which often involve one or more people with high-conflict personalities (HCPs). But this method can be used with anyone – anywhere. The CARS Method is designed to help you organize your responses to calm down upset people, to redirect their energies and to focus them on positive future choices and consequences. This article is a brief excerpt from our book It’s All Your Fault at Work, Chapter 2, which explains the basics of how anyone can use this method.

Forget about Insight (Just Fuhgeddaboutit!) One of the hardest things to “get” about dealing with highly-upset people is that normal efforts to talk logically and give them insights about themselves will fail. Just Fuhgeddaboutdit! Setting Limits with E.A.R. - High Conflict Institute. © 2015 by Bill Eddy, LCSW, Esq. and L. 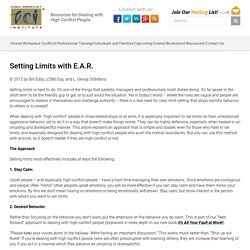 Georgi DiStefano Setting limits is hard to do. It’s one of the things that parents, managers and professionals most dislike doing. It’s far easier in the short term to be the friendly guy or gal, or to just avoid the situation. Yet in today’s world – where the rules are vague and people are encouraged to believe in themselves and challenge authority – there is a real need for clear limit-setting that stops harmful behavior, to others or to oneself.

So What's Your Proposal? - High Conflict Institute. The following is an excerpt from chapter 2 of Bill Eddy’s new book titled: So What’s Your Proposal? 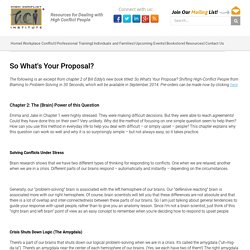 Shifting High-Conflict People from Blaming to Problem-Solving in 30 Seconds, which will be available in September, 2014. Pre-orders can be made now by clicking here. Chapter 2: The (Brain) Power of this Question Emma and Jake in Chapter 1 were highly stressed. They were making difficult decisions. Solving Conflicts Under Stress Brain research shows that we have two different types of thinking for responding to conflicts. Generally, our “problem-solving” brain is associated with the left hemisphere of our brains. Crisis Shuts Down Logic (The Amygdala) There’s a part of our brains that shuts down our logical problem-solving when we are in a crisis. This defensive reacting may save your life, if you are facing a flood, a fire, a violent person or some other crisis. Overriding the Crisis Response. Coaching Clients to Make Proposals - High Conflict Institute. © 2014 by Bill Eddy, LCSW, Esq. 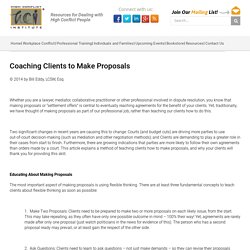 Whether you are a lawyer, mediator, collaborative practitioner or other professional involved in dispute resolution, you know that making proposals or “settlement offers” is central to eventually reaching agreements for the benefit of your clients. Yet, traditionally, we have thought of making proposals as part of our professional job, rather than teaching our clients how to do this. Two significant changes in recent years are causing this to change: Courts (and budget cuts) are driving more parties to use out-of-court decision-making (such as mediation and other negotiation methods); and Clients are demanding to play a greater role in their cases from start to finish.

Furthermore, there are growing indications that parties are more likely to follow their own agreements than orders made by a court. This article explains a method of teaching clients how to make proposals, and why your clients will thank you for providing this skill.