Vote with Your Wallet - UPC Lookup Database, Find Barcode Scanner, Boycott. "Buycott": Diese App zeigt, welche Marken zu welchem Konzern gehören. The Battle for the Future of Farming: What You Need to Know. New Open Source License Fights the Enclosure of Seeds. Igniting a revolution in the way humanity feeds itself. I’m writing here to invite you to the adventure of a lifetime, the challenge of a generation. 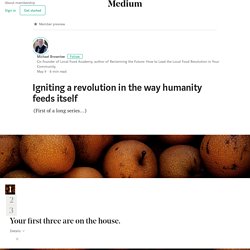 You are greatly needed now. Some background is probably in order, but at the moment I’ll just say that I’m a recruiter and trainer for those who are mobilizing to lead the local food revolution in their communities and bioregions. This may be the most important and most urgent cause of our time. More broadly, I support evolutionary catalysts, those who are consciously working to birth a new civilization out of the ashes of the old one. The local food revolution is an essential part of that larger effort. You’re probably already somewhat familiar with the local food movement. Tanzania Forced To Embrace Seed Patents Or Risk Losing Aid. A woman works a field near the Tanzanian town of Arusha. 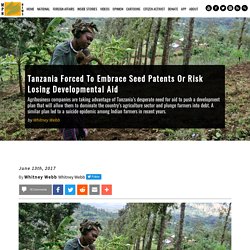 (AP/Karel Prinsloo) MINNEAPOLIS– A “development assistance” initiative launched five years ago by the G8, an inter-governmental political forum of the world’s most industrialized nations that consider themselves democracies, is holding Tanzania hostage to the benefit of agribusiness and the detriment of small-scale Tanzanian farmers. The New Alliance for Food Security and Nutrition (NAFSN), founded by the G8 in 2012 to ostensibly end hunger and poverty for 50 million people, has forced the Tanzanian government to amend its laws to drastically favor agribusiness and seed companies if it wishes to continue receiving developmental assistance aid.

Monsanto, one of the NAFSN’s partners in Tanzania, is set to benefit from these changes to Tanzania’s laws. UN experts denounce 'myth' pesticides are necessary to feed the world. The idea that pesticides are essential to feed a fast-growing global population is a myth, according to UN food and pollution experts. 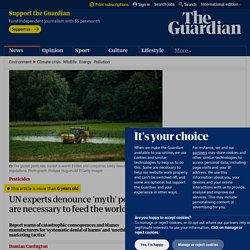 A new report, being presented to the UN human rights council on Wednesday, is severely critical of the global corporations that manufacture pesticides, accusing them of the “systematic denial of harms”, “aggressive, unethical marketing tactics” and heavy lobbying of governments which has “obstructed reforms and paralysed global pesticide restrictions”. The Future of Farmland: Grabbing the Land Back - Resilience. It's Official: California Lists Key Ingredient in Monsanto's Roundup as Cancer-Causing. By Katherine Paul California is officially adding glyphosate, the key ingredient in Monsanto's Roundup herbicide, to the state's list of chemicals and substances known to cause cancer. 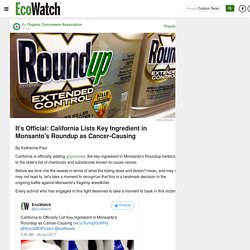 Before we dive into the weeds in terms of what the listing does and doesn't mean, and may or may not lead to, let's take a moment to recognize that this is a landmark decision in the ongoing battle against Monsanto's flagship weedkiller. Every activist who has engaged in this fight deserves to take a moment to bask in this victory.

It's not everything we need, or everything we want—but California's decision, upheld by the courts, represents a major step forward in a decades-long fight expose the truth about Roundup and protect the public from its cancer-causing effects. The full impact of the decision remains to be seen. Greensgrow Farms : Greensgrow Farms. Attend a food conference today and in all likelihood there will be a tract on urban farming. 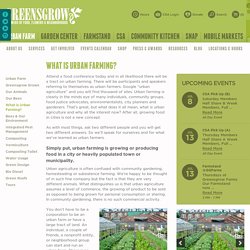 There will be participants and speakers referring to themselves as urban farmers. Google “urban agriculture” and you will find thousand of sites. Urban farming is clearly in the minds eye of many individuals, community groups, food justice advocates, environmentalists, city planners and gardeners. That’s great, but what does it all mean, what is urban agriculture and why all the interest now? After all, growing food in cities is not a new concept. As with most things, ask two different people and you will get two different answers.

Urban agriculture is often confused with community gardening, homesteading or subsistence farming. You don’t have to be a corporation to be an urban farm or have a large tract of land. Smarticular.net - Ideenportal für ein einfaches und nachhaltiges Leben. Farmers struggle with the supermarket squeeze. Townies may be a bit hazy about cattle cake or baler twine, but they know one thing about agriculture: farmers are all broke and supermarkets are the reason why. 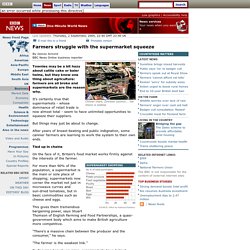 It's certainly true that supermarkets - whose dominance of retail trade is now almost total - seem to have unlimited opportunities to squeeze their suppliers. Wer hat die Macht über unser Essen? The Battle against the Global Food Conglomerates: The Seeds of Agroecology and Common Ownershipuntitled. Local Food Systems. A local food system is a collaborative network that integrates sustainable food production, processing, distribution, consumption, and waste management in order to enhance the environmental, economic, and social health of a particular area. 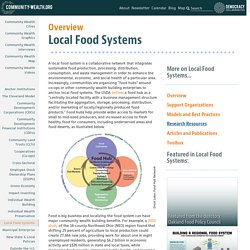 By Evaggelos Vallianatos In May 2014, the Spain-based international agrarian organization, Grain, reported that small farmers not only “feed the world with less than a quarter of all farmland,” but they are also the most productive farmers on Earth. 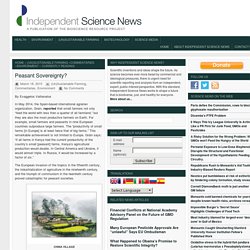 For example, small farmers and peasants in nine European countries outproduce large farmers. Decentralize, Grow Your Own, Buy Local. First Urban ‘Agrihood’ In America Feeds 2,000 Households For Free. The agrihood is located in Detroit, Michigan, and feeds thousands of families in the area. 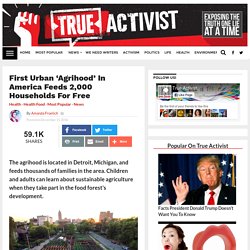 Children and adults can learn about sustainable agriculture when they take part in the food forest's development. Credit: Michigan Urban Farming Initiative. Cornell Land Project – Helping to Prevent Damaging Land Grabbing. Joel Salatin shows Oz how to have a thriving local food system. By MADGE (Australia) Joel Salatin is the self confessed lunatic farmer who is featured in the films Food Inc. and Fresh. 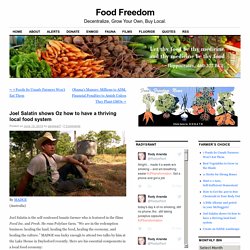 He runs Polyface farm. “We are in the redemption business: healing the land, healing the food, healing the economy, and healing the culture.” MADGE was lucky enough to attend two talks by him at the Lake House in Daylesford recently. Here are his essential components in a local food economy: Maine Town Declares Food Sovereignty. This is a tiny but welcome step. However, this also has a very negative side. It more-or-less accepts the premise that any number of overt FICTIONs called “government” (federal, province, state, county, city, town, village, neighborhood, etc) have some kind of legitimate “right” to enslave us and bleed us dry (via fees and taxation). AND it presumes that the only way any one of us can escape such enslavement is on a one-by-one basis like the case described here. Which would mean these local towns would need to pass as many million “escape laws” as so-called “higher level” government fictions create. National Family Farm Coalition.

What We Fight ForBuilding support for a growing international food sovereignty movement.Empowered family farmers who can advocate for their right to food sovereignty on a global scale.An alternative to our broken food and farm systems, as envisioned by the Food From Family Farms Act.The representation of international peasant struggles in the United States through La Via Campesina.Shining a spotlight on the global food crisis and the U.S. policy reforms that are necessary to stop it. What Is Food Sovereignty? Food Sovereignty is the right of communities to choose where and how their food is produced, as well as what food they consume, and the food sovereignty movement seeks to guarantee these basic rights for communities around the world. Fighting against corporate control of agriculture, family farmers and fisherman are leading the way to change in the food system.

The Law For Food Facism By Vandana Shiva. The Law For Food Facism By Vandana Shiva 22 February, 2005 Zmag Food laws and Food Safety for India’s diverse and local food economy The Government has drafted a Food Safety and Standards Bill 2005 as an “Integrated Food Law” which has been prepared with the intention to be contemporary, comprehensive, and ensure better consumer safety through food safety management systems and settling standards based on science and transparency as also meeting the dynamic requirements of international trade and Indian Food Trade and Industry. Clearly, the law has been designed to lubricate international trade and the expansion of the global agribusiness. Consumer health, nutrition, and food culture are not even mentioned as objectives of the integrated food law.

We need seed savers in every community Some 12,000 years ago, agriculture began when farmers started to gather seeds from wild plants and began sowing them to grow food. Sowing the Future. Trade deals criminalise farmers' seeds. What could be more routine than saving seeds from one season to the next? After all, that is how we grow crops on our farms and in our gardens. As Climate Change Threatens Food Supplies, Seed Saving is an Ancient Act of Resilience - Resilience. Twenty Seed Saving Initiatives Preserving Biodiversity Around the World - Resilience. Die Saatgut Retter. Tote Ernte Der Krieg ums Saatgut. Tanzania orders destruction of Monsanto/Gates’ GM trials due to illegal use for pro-GM propaganda. Dar es Salaam 23 November 2018. New Study: GE Crops DON’T Increase Crop Yields. A new study published by the Environmental Working Group has revealed that biotech’s claims concerning higher crop yields are based on a bunch of hot air.

How’s this high-flying claim made by the Biotechnology Industry organization: “Agricultural biotechnology continues to increase crop yield and farmer income worldwide while supporting the environment.” That example of hyperbole was published back in 2007. Farmers Abandoning GMO Seeds And The Reason Will Surprise You. Act Out! [83] - Monsanto Taken to Court, A Global Food Fight, Bees & Lame Ducks. International Monsanto Tribunal in The Hague - October 2016. Hungarians Just Destroyed All Monsanto GMO Corn Fields. Untitled. Untitled. The Health Risks of GMOs Have Been Systematically Misrepresented.