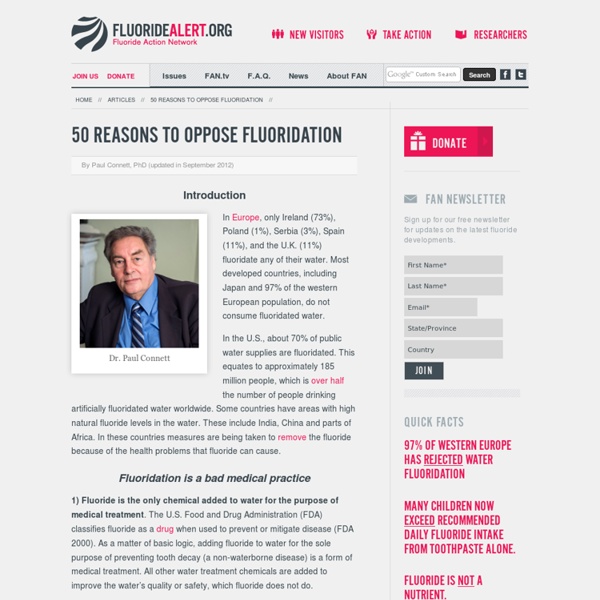 1) Fluoride is the only chemical added to water for the purpose of medical treatment. The U.S. Food and Drug Administration (FDA) classifies fluoride as a drug when used to prevent or mitigate disease (FDA 2000). 2) Fluoridation is unethical. Put another way: Does a voter have the right to require that their neighbor ingest a certain medication (even if it is against that neighbor’s will)? 3) The dose cannot be controlled. 4) The fluoride goes to everyone regardless of age, health or vulnerability. “Water fluoridation goes against leading principles of pharmacotherapy, which is progressing from a stereotyped medication — of the type 1 tablet 3 times a day — to a much more individualized therapy as regards both dosage and selection of drugs. 5) People now receive fluoride from many other sources besides water. 6) Fluoride is not an essential nutrient. 7) The level in mothers’ milk is very low. 8 ) Fluoride accumulates in the body. Swallowing fluoride provides no (or very little) benefit Related:  Health

IQ Study from Iran Reveals the Effects of Fluoride Exposure As of September 2016, a total of 57 studies have investigated the relationship between fluoride and human intelligence, and over 40 studies have investigated the relationship fluoride and learning/memory in animals. Of these investigations, 50 of the 57 human studies have found that elevated fluoride exposure is associated with reduced IQ, while 45 animal studies have found that fluoride exposure impairs the learning and/or memory capacity of animals. The human studies, which are based on IQ examinations of over 12,000 children, provide compelling evidence that fluoride exposure during the early years of life can damage a child’s developing brain. After reviewing 27 of the human IQ studies, a team of Harvard scientists concluded that fluoride’s effect on the young brain should now be a “high research priority.” Quick Facts About the 50 Studies: Methodological Limitations Summary

Albuquerque, NM Ends Water Fluoridation!   Fluoride is no longer being added to Albuquerque’s drinking water. City officials argued supplemental fluoride is not necessary to meet current standards, but a local dentist said they should think twice. “It is virtually indisputable that fluoride reduces, drastically reduces, the incidents of tooth decay in the general population,” Dr. Paul Dunn said. In the past few decades, Dunn said the number of patients he sees with dental problems, from tooth aches to cavities, has dramatically decreased. “A lot of this is due to municipal water fluoridation,” Dunn said. Dollar for dollar, Dunn said supplemental water fluoridation is the single most cost-effective public health measure to reduce dental disease, but it is something Albuquerque residents will no longer be receiving when taking a sip of water from the tap. “We’re going to err on the side of caution,” said David Morris, with the Water Authority. But some residents are worried about the potential health impact. Source: KOB.com

Ingredients in Herbal Essence Shampoo When we are wading through the hair jungle, the most common problem we run into as women are the ingredients to a shampoo. What do they mean??? Often we have to rely on television ads and magazine ads to tell us the truth about what this product will do to our hair. Lets take a look at the old formula of Herbal Essences before it was revamped into the product line it is now: Old Herbal Essences Ingredients: Water, Sodium Laureth Sulfate, Sodium Lauryl Sulfate, Cocamidopropyl Betaine, Sodium Chloride, Citric Acid, Sodium Citrate, Fragrance, Passiflora Incarnata Flower Extract, Anthemis Nobilis Flower Extract, Aloe Barbadensis Flower Extract, PEG-60 Almond Glycerides, Cocamide MEA, Sodium Benzoate, Tetrasodium EDTA, Guar Hydroxypropyltrimonium Chloride, Linoleamidopropyl PG-Dimonium Chloride Phosphate, Sodium Xylene Sulfonate, Methylchloroisothiazolinone, Methylisothiazolinone, Yellow 5, Orange 4, Ext Violet 2 SLES and SLS are used in products because it is cheap and easily available.

Chemist declares fluoride to be 'one of the greatest public health threats of modern times' (NaturalNews) Ingesting artificial fluoride chemicals does not prevent tooth decay, but rather destroys your insides and leads to the development of cancer and other illnesses. These are the disturbing findings of an assessment recently compiled by award-winning chemist, author, and founder of ThePeoplesChemist.com, Shane Ellison. Frustrating more than 50 years of bad science that has claimed the exact opposite, Ellison's appraisal of fluoride's negative effects on the body shows once again why removing fluoride from public water supplies is crucial to public health. And health freedom advocates must step up to be the educational catalyst for bringing about this change nationwide. "Once ingested, fluoride compounds attack the structural integrity of our insides," says Ellison. Ellison adds that laboratory studies dating back decades have shown that fluoride spurs the mutation of mammalian DNA cells, which can promote the growth of cancer cells. Sources for this article include:

Dangerous Chemicals in Deodorant & Antiperspirant: A Detailed Review of the Chemicals, Research & Avoidance Tips | Natural Cosmetic News The personal care industry has been hijacked by misleading messages and outright false advertising. More concerning is that companies are putting their profits before the health and well-being of their consumers. While the FDA is slow to react and enforce regulation that could ban harmful ingredients, consumers continue to use their “trusted” products. Deodorants and Antiperspirants are a hot topic. Spread across the internet is misinformation and confusion, and if there is one thing that requires clarity it is your health. Aluminum is one of the main concerns. Unfortunately, the clarity we desperately need is not so easy to come by. The following is a detailed list and explanation of dangerous chemicals commonly found in non-natural deodorants and antiperspirants: Aluminum Aluminum-based compounds are the active ingredients in antiperspirants. Parabens Although parabens have estrogen-like properties, the estrogens that are made in the body are hundreds of times stronger. Propylene Glycol

West Midlands campaigners vow to stop fluoridation of Birmingham drinking water Dr Robert Verkerk briefs Truth Juice campaigners Governments who support fluoridation always seem surprised when they find the public are not happy having a waste product of the fertilizer industry put into their drinking water. Especially when they know that governments who sanction this ‘public health measure’ know full well that it harms young children, the very group it’s intended to help. At the Truth Juice meeting in Birmingham earlier this week, to which Rob Verkerk (ANH-Intl’s executive and scientific director) was asked to present, a fired-up audience discovered a fact that was hard to swallow. The meeting was also supported by West Midlands Against Fluoride - (WMAF) and water quality campaigner Joy Warren, who represent many angry residents, who have vowed to pull the plug on fluoridated water. Rob Verkerk’s short video commentary Check out Rob’s short video commentary on the issue and then get involved in any way you think will make a difference. Ireland Against Fluoridation

5 Toxic Chemicals Hiding in Your Deodorant Each day, as we get ready to play our part in society, we put on our favorite fragrances and cosmetics and unknowingly subject ourselves to toxic chemicals. Over time, these toxic chemicals can cause cancers, tumors, bronchial issues and other health related problems. According to the National Cancer Society, “Reports have suggested that these products contain harmful substances, which can be absorbed through the skin or enter the body through nicks caused by shaving. Some scientists have also proposed that certain ingredients in underarm antiperspirants or deodorants may be related to breast cancer because they are applied frequently to an area next to the breast.” Since our skin is our largest organ, we need to take measures to ensure that what we put on it is as natural as possible. Here are five harmful chemicals found in deodorant that can play a part in the diminishment of our health. 1. Aluminum compounds are added to deodorant to block the pores from sweating. 2. 3. 4. 5. Google+