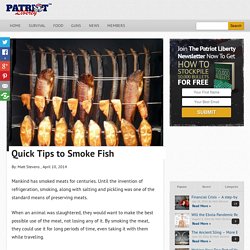 Until the invention of refrigeration, smoking, along with salting and pickling was one of the standard means of preserving meats. When an animal was slaughtered, they would want to make the best possible use of the meat, not losing any of it. By smoking the meat, they could use it for long periods of time, even taking it with them while traveling. Today, smoking has become somewhat of a delicacy, ignoring its original purpose. That doesn’t mean that we can’t use it as a means of preserving meat though. How to smoke fish? Before smoking the fish, it is essential that it be soaked in brine (salt water).

You can also add additional flavorings to the brine, such as spices, peppercorns or wine. The fish must be soaked in the brine for at least 15 minutes for every 1/2 inch of meat thickness. Aquaponics 4 You - Step-By-Step How To Build Your Own Aquaponics System. “Break-Through Organic Gardening Secret Grows You Up To 10 Times The Plants, In Half The Time, With Healthier Plants, While the "Fish" Do All the Work...” 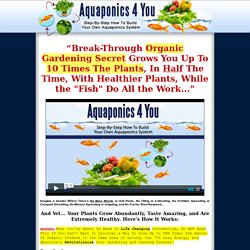 Imagine a Garden Where There's No More Weeds or Soil Pests, No Tilling or Cultivating, No Fertilizer Spreading or Compost Shredding, No Manure Spreading or Irrigating, and No Tractor Shed Required... And Yet... Your Plants Grow Abundantly, Taste Amazing, and Are Extremely Healthy. Here's How It Works: WARNING: What You're About To Read Is Life Changing Information, DO NOT Read This If You Don't Want To Discover a Way To Grow Up to TEN Times the Amount Of Organic Produce In the Same Area of Ground, Use 70% Less Energy, And Absolutely Revolutionize Your Gardening and Farming Forever. Dear Gardener, Imagine you knew a secret about growing plants in a break-through new way... to the outside world your organic garden or farm would seem almost "magic", Why?

Water wars: Shortages may destroy entire nations, warns government report. (NaturalNews) The Office of the Director of National Intelligence (ODNI) recently released a report entitled Global Water Security that claims water supply issues around the globe will lead to economic instability, civil and international wars, and even the use of water as a weapon in the next several decades. 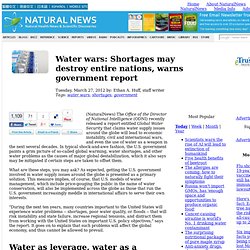 In typical shock-and-awe fashion, the U.S. government paints a grim picture of so-called global warming, water shortages, and other water problems as the causes of major global destabilization, which it also says may be mitigated if certain steps are taken to offset them. What are these steps, you may ask? As expected, getting the U.S. government involved in water supply issues around the globe is presented as a primary solution.

The report specifically warns that water will be used as leverage by some countries to influence their neighbors, and even as a potential weapon. No government report would be complete without making reference to terrorism, after all. Low Maintenance Animals That Work For You: Chickens, Rabbits, and Goats. Wednesday, Oct 5, 2011 When I began to plan my families survival food stores, it quickly became apparent that if/when we lose our suburban grocery store lifestyle, my stores are only going to last a limited time. 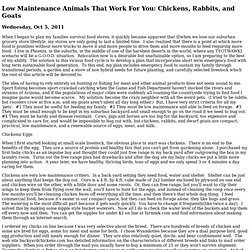 I also realized that there is a point at which more food is pointless without more trucks to move it and more people to drive them and more mouths to feed requiring more food. I live in Phoenix, in the suburbs, in the middle of one of the harshest deserts in the world, where any TEOTWAWKI scenario will be a G.O.O.D. situation. Relocation now is a desirable but unattainable option, so I am preparing to the best of my ability. The solution to this vicious food cycle is to develop a plan that incorporates short term emergency food with long term sustainable food generation. The idea of having to rely entirely on hunting or fishing for meat and other animal products does not seem sound to me. 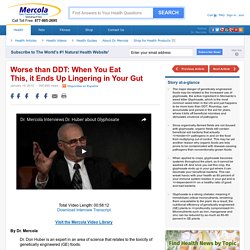 Mercola Dr. Don Huber is an expert in an area of science that relates to the toxicity of genetically engineered (GE) foods. (Alternative terms for GE foods include genetically modified (GM), or "GMO" for genetically modified organism.) His specific areas of training include soil-borne diseases, microbial ecology, and host-parasite relationships. The "Biodegradable" Weed Killer that Wasn't… The public's appreciation of the toxicity of glyphosate is rather limited. "There are some similarities," Dr. Glyphosate Persists in Soil, and Promotes Disease-Causing Pathogens According to Dr. "The organisms that are stimulated are the pathogens," Dr. This 500 percent increase in root colonization of the fusaria fungus occurs even on Roundup-ready crops, because the technology does not 'cancel out' the effects of the glyphosate in the plant in any way.