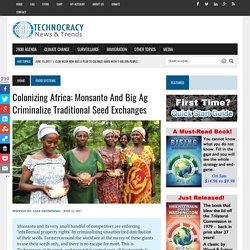 Humanity's Big Fight: The Corporate Ownership of Food and Water. Privatization and corporate ownership of our food and water is what is at stake. 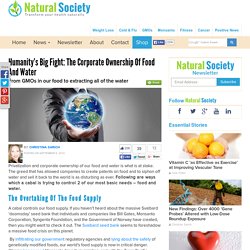 The greed that has allowed companies to create patents on food and to siphon off water and sell it back to the world is as disturbing as ever. Following are ways which a cabal is trying to control 2 of our most basic needs – food and water. The Overtaking of the Food Supply A cabal controls our food supply. If you haven’t heard about the massive Svalbard ‘doomsday’ seed bank that individuals and companies like Bill Gates, Monsanto Corporation, Syngenta Foundation, and the Government of Norway have created, then you might want to check it out. By infiltrating our government regulatory agencies and lying about the safety of genetically modified foods, our world’s food supply is now in critical danger.

GMOs have been linked to cancer, with the World Health Organization now finally admitting that glyphosate, the main herbicide manufactured to be used in concert with these crops, is ‘probably carcinogenic.’ British aid is helping agribusiness carve up Africa. Shifting to production for export means relying on imported food, leaving people vulnerable to sudden price spikes. 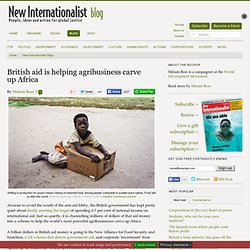 Food 'aid' is often the result. Feed My Starving Children (FMSC) under a Creative Commons Licence Anxious to avoid the wrath of the anti-aid lobby, the British government has kept pretty quiet about finally meeting the target of spending 0.7 per cent of national income on international aid. Just as quietly, it is channelling millions of dollars of that aid money into a scheme to help the world’s most powerful agribusinesses carve up Africa. A billion dollars in British aid money is going to the New Alliance for Food Security and Nutrition, a G8 scheme that directs government aid, and corporate ‘investment’ from companies like Unilever and Monsanto, to the 10 African countries that have so far signed up. Big Corporations Have An OVERWHELMING Amount Of Power Over Our Food Supply. Michael SnyderEconomic Collapse July 15, 2014 From our fields to our forks, huge corporations have an overwhelming amount of power over our food supply every step of the way. 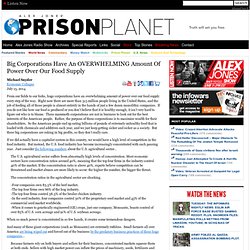 Right now there are more than 313 million people living in the United States, and the job of feeding all of those people is almost entirely in the hands of just a few dozen monolithic companies. If you do not like how our food is produced or you don’t believe that it is healthy enough, it isn’t very hard to figure out who is to blame. These mammoth corporations are not in business to look out for the best interests of the American people. Rather, the purpose of these corporations is to maximize wealth for their shareholders. If we did actually have a capitalist system in this country, we would have a high level of competition in the food industry.

The U.S. agricultural sector suffers from abnormally high levels of concentration. When so much power is concentrated in so few hands, it creates some tremendous dangers. Right To Farm Being Stripped From Americans: Michigan to criminalize small family farms with chickens, goats, honey bees and more. By MIKE ADAMS In the latest stunning assault on Americans’ right to grow their own food, the freedom-crushing state of Michigan has ruled that local governments (cities, towns, counties) can now ban any animal they wish from small residential farms. 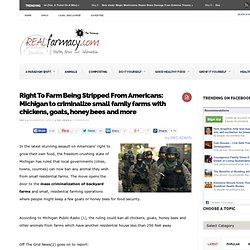 The move opens the door to the mass criminalization of backyard farms and small, residential farming operations where people might keep a few goats or honey bees for food security. According to Michigan Public Radio (1), the ruling could ban all chickens, goats, honey bees and other animals from farms which have another residential house less than 250 feet away. Off The Grid News(2) goes on to report: Some homesteaders in Michigan could find themselves in a complete regulatory limbo because of the Commission’s action. Issues. Monsanto trying to take over world seed supply, nation by nation. (NaturalNews) He who controls the seed controls the food supply; and he who controls the food supply controls the world. 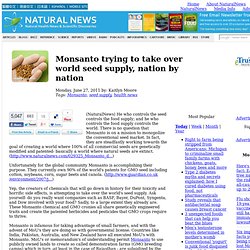 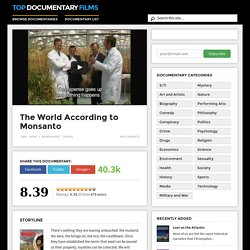 Once they have established the norm: that seed can be owned as their property, royalties can be collected. We will depend on them for every seed we grow of every crop we grow. If they control seed, they control food, they know it – it's strategic. It's more powerful than bombs. It's more powerful than guns. This is the best way to control the populations of the world. Thanks to these intimate links between Monsanto and government agencies, the US adopted GE foods and crops without proper testing, without consumer labeling and in spite of serious questions hanging over their safety. Monsanto’s long arm stretched so far that, in the early nineties, the US Food and Drugs Agency even ignored warnings of their own scientists, who were cautioning that GE crops could cause negative health effects.