Seeds of Death: Unveiling The Lies of GMO's - Full Movie 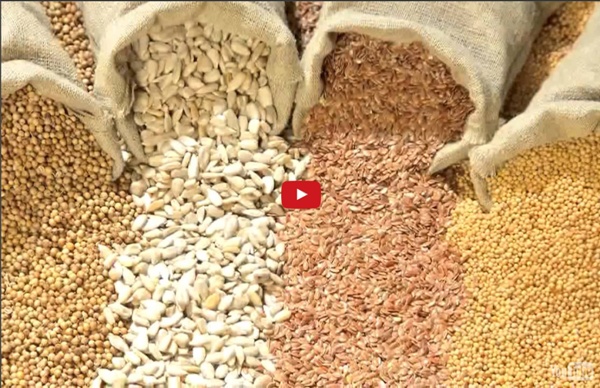 Alternate Nostril Breathing | Fiona Childs Alternate Nostril Breathing, also known as Nadi Shodhana, is an extremely effective stress relief tool. Emphasis: …an extremely effective stress relief tool. It might sound a bit woo woo, but it is in fact a breathing technique that is scientifically proven to reduce blood pressure, increase focus and reduce cortisol (using the gold standard for scientific studies — randomized and placebo-controlled). Not only that, but nadi shodhana is totally free, easy to do and available any time. This breathing exercise is a life hack that will reduce your stress level and your cortisol in a jiffy. You can use this technique any time you want. My children love this breathing practice too and utilize it throughout their days — especially right before homework time. Alternate Nostril Breathing (Nadi Shodhana) Steps 1. 2. 3. 4. 5. 6. 7. 8. 9. 10. When you try this for the first time, take note of how you feel before you do it and then after. According to functional medical practitioner, Dr.

GMO fears do not 'translate to the average consumer' - Canada Although many farmers took up placards this week to protest the possible introduction of genetically modified alfalfa into Canada, experts say that for the average Canadian consumer, the issue of bioengineered foods barely registers. "These concerns among farmers and informed groups of consumers does not translate to the average consumer. They are too far removed from the concerns of the farming community," says Andreas Boecker, an associate professor at the University of Guelph whose research includes studying consumer acceptance of GM foods. RELATED: Genetically modified alfalfa protested by Canadian farmers Genetically modified organisms, or GMOs, first hit the market in 1994 — the first product was the "Flvr Svr" tomato, designed to stay ripe for longer. Since then, there has been ongoing debate over the safety and environmental sustainability of these so-called "frankenfoods." What are GMOs, or genetically modified organisms? Apathy or lack of information? "It's definitely a hot topic.

Law and Litigation: Growing legal problems for genetically modified foods Troy Greenfield and Claire Been, Contributing Writers Natural. Organic. Locally sourced. More people than ever before are thinking about where their food comes from, whether ethical practices were used, and what chemicals or hormones might have been added along the way. With consumer passion comes the risk of corporate liability. Perhaps most surprising to many Americans is how widespread GMOs have become. Since 1996, when genetically modified crops were commercialized in the United States, the vast majority of U.S. farmers have adopted GM seed and crops. It has been estimated that 75 percent of all processed foods in the U.S. contain a GM ingredient. The U.S. currently does not require labeling of GM foods or products.

Whitehead and Whitehead Consultants Mantras - Ram Dass The following is an excerpt from Ram Dass’ new book, “Polishing the Mirror” – which is out now. Inside of me there’s a mantra going on that reminds me of who I am. It’s that place inside – that niche in the wall where the candle flame never flickers. Always bringing me right to my heart where we dwell eternally. Mantra is the repetition of the names of God. In Buddhism, the word mantra means “mind protecting”. Mahatma Gandhi said, “The mantra becomes one’s staff of life, and carries one through every ordeal. Keep repeating your mantra consciously until it has become a strong habit. Maharajji said, “The best form in which to worship God is all forms.” The Divine is present in the soul of all living beings and in the Universe. In different ages, countries and religions, God has been called by different names. Once you choose a mantra and establish a practice, it is a good idea not to change mantras so the practice will become deeper. From the Hindu tradition: Hare Krishna, Hare Krishna,

The Intensifying Debate Over Genetically Modified Foods 70 percent of the food in our supermarkets contains genetically modified ingredients. Photo: Rupert Ganzer Genetically modified foods are in the news more and more, as the debate over whether or not they are safe continues. In June, Connecticut became the first state to pass a law to require the labeling of foods that contain genetically modified organisms (GMO). The law will not take effect, however, until four other states, including one contiguous one, pass similar laws. Maine and 25 other states have also introduced genetically modified food labeling legislation. In May, unapproved experimental GM wheat was discovered at an Oregon farm, reigniting concerns about the difficulty of containing GM crops so that they don’t contaminate non-GM crops. Genetically modified foods contain organisms that have had DNA from a non-related species transferred into their genes via biotechnology to imbue them with specific traits. Photo: LondonPermaculture Bt corn being grown in Africa.

Krishna Das - About Chanting Chanting (Kirtan) is a part of the path of Devotional Yoga. When we see the beauty of our own being we are seeing the beauty of the Being that is the One of which we are all a part. And when we turn towards that One, love is the natural reaction of the heart. God or Guru is an endless ocean of love truth and presence. Those that have returned have given us these Names of God. The following is an excerpt from 'Pilgrim of the Heart' audio series by Krishna Das: "The words of these chants are called the divine names and they come from a place that's deeper than our hearts and our thoughts, deeper than the mind. Satsang is where people gather together to remember, to turn within and find their own inner path to the One. Programs with Krishna Das are usually done in three different ways: