Western Australia wave energy project on the brink of commercialisation 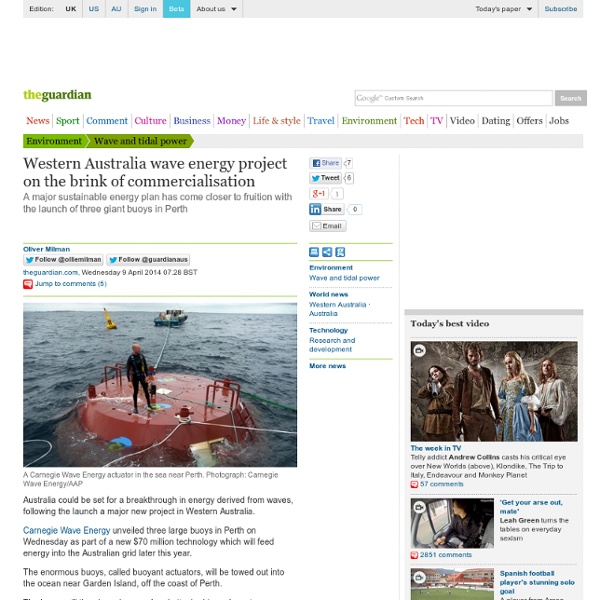 Australia could be set for a breakthrough in energy derived from waves, following the launch a major new project in Western Australia. Carnegie Wave Energy unveiled three large buoys in Perth on Wednesday as part of a new $70 million technology which will feed energy into the Australian grid later this year. The enormous buoys, called buoyant actuators, will be towed out into the ocean near Garden Island, off the coast of Perth. The buoys will then be submerged and attached to underwater pumps. The high-pressure water will also be fed into an onshore desalination plant, creating fresh water without the need for pumps. Electricity and water provided by the project will be used by the department of defence for HMAS Stirling, Australia’s largest naval base, which is on Garden Island. The government, which has provided $13.1 million in funding through the Australian Renewable Energy Agency (ARENA), said the project will be the first operating wave energy array scheme in the world.

Assessing the risk of persistent drought using climate model simulations and paleoclimate data Toby R. Ault* Department of Earth and Atmospheric Sciences, Cornell University, Ithaca, NY Julia E. Cole Dept. of Geosciences and Dept. of Atmospheric Sciences, University of Arizona, Tucson, AZ Jonathan T. Gregory T. U. David M. Laboratory of Tree-Ring Research, University of Arizona, Tucson, AZ Projected changes in global rainfall patterns will likely alter water supplies and ecosystems in semiarid regions during the coming century. * Corresponding author address: Toby R. The U.S. Southwest Could Soon Experience Decades-Long "Megadroughts" But at the same time this problem reveals the reasons why we will not do a damn thing about global warming. You see, even before the threat of mega-droughts, it's been obvious for some time that the vast western no-population states were going to have water issues. Hell, in Michigan we've been having battles with them over the diversion of the Great Lakes for at least a decade. We knew forever they'd be running out of water. Pah! So, yeah, the West is going to become even more useless and uninhabitable than now. What will we do? Ah, put it off till then.

195 drought maps reveal just how thirsty california has become - LA Times It doesn't take much to understand why California is so worried about drought. Reservoirs are ever-dwindling. Rainfall is sporadic at best. And let's not forget about the millions of gallons of precious water recently flooding the streets of Brentwood. More than 80% of California is in extreme drought, according to the U.S. The Drought Monitor, which collects data from 50 different weather indicators, have shown an increasingly red California since 2011, the last time the drought map was clear. Watch the 6-second snap-shot here. Can These Guys Really Pull Off An Underground Park In NYC? In an abandoned warehouse on New York’s Lower East Side, a radical new kind of park is taking shape. Among the peeling paint and old neon signs advertising food, fruit, and meat, an intensive period of design development has yielded a prototype of the LowLine, an underground park whose name riffs off Chelsea’s now-famous High Line. The High Line got us all thinking about how to reuse and reimagine underutilized and forgotten urban spaces. The LowLine takes that even one step further, inspiring cities around the world to conceive of even the least visible disused infrastructure as potential green space--in this case, a former trolley terminal. “If the High Line is a sand dune, the LowLine is the forest floor,” said James Ramsey, co-founder and lead architect behind the LowLine, an organization in its first year that already has run a $100,000 Kickstarter campaign and has the backing and partnership of many city officials, local community organizations, and corporate sponsors.

Warm oceans pose risk of global coral bleaching event in 2015 After a surprisingly rough summer for coral reefs in 2014, NOAA scientists are warning that warm ocean temperatures in the tropical Pacific and Indian Oceans could set the stage for a global outbreak of coral bleaching—the loss of corals’ food-producing algae—in 2015. The map above shows areas where there is a 60 percent likelihood of coral heat stress from March until June 2015 according to NOAA’s Four-Month Coral Bleaching Thermal Stress Outlook. The outlook depends on sea surface temperature forecasts from NOAA’s operational climate forecast system model to show regions that are most likely to experience bleaching up to four months in advance. Areas that are at risk of potential bleaching are shown in lighter shades of orange. The darker red colors indicate areas of more sustained heat stress. Bleaching occurs when corals expel the symbiotic algae that live inside them and produce much of their food (through photosynthesis). Related Links

Advert turns air into drinking water 22 March 2013Last updated at 14:40 ET By Aida Prados BBC Mundo The billboard serves a dual purpose, acting to draw students to the newly established engineering university UTEC Just outside Lima, Peru, a billboard provides drinking water to whoever needs it - mainly, its neighbours. The panel produces clean water from the humidity in the air, through filters. Researchers at the University of Engineering and Technology (UTEC) in Lima and advertising agency Mayo Peru DraftFCB joined forces to launch it. UTEC says it wanted to put "imagination into action" and show that it is possible to solve people's problems through engineering and technology. "A billboard that produces drinking water from air," says the billboard up high. The panel is strategically located in the village of Bujama, an area south of the capital city that is almost a desert, where some people have no access to clean water. Access to all Despite tough conditions with little rain, air humidity reaches 98%, says UTEC.

Soma Unveils World's First Completely Compostable Water Filter Water filtration company Soma recently unveiled the world’s first entirely compostable water filter. Soma replaced conventional plastic casing filters with a food-based PLA composite that incorporates Malaysian coconut shells and vegan silk. The filter removes chlorine, heavy metals and other contaminants from tap water, producing clean water with a crisp taste. The sleek hour glass carafe combines great design with sustainability, and it looks better than a Brita filter to boot. Most traditional water filters are made mostly of plastic with a carbon filter. By contrast, Soma’s filter is completely organic, as it’s made of a starch-based plastic and vegan silk with a burned coconut shell filter. + Soma The article above was submitted to us by an Inhabitat reader.

Chandler proving 'water innovation' can be a big plus No city in Arizona is more innovative about water use than the East Valley community of Chandler, which last month adopted a policy requiring new high-volume commercial water users to purchase water on the open market once they exceed a set threshold. More communities need to join the party. Chandler isn't alone in focusing on water conservation. Phoenix just announced a major, new emphasis on reclaiming water. But Chandler's approach is breaking the mold. "It's a bit of an experiment, but that's terrific. So why not? Part of the reason, we suspect, is that innovation is scary. Businesses in Chandler will be ensured a water supply up to a certain level. "(The) last thing we want to do is use 100 percent of our water and find out we only have 90 percent of our land built," said Doug Toy, Chandler's water regulatory-affairs manager. Chandler officials are fully aware that water availability historically has been considered a given. Read or Share this story:

From open sewage to high-tech hydrohub, Singapore leads water revolution A youth cools himself off at a water fountain near Marina Bay in Singapore July 27, 2015. REUTERS/Edgar Su SINGAPORE, August 3 (Thomson Reuters Foundation) - Fifty years ago Singapore had to ration water, and its smelly rivers were devoid of fish and choked with waste from shipbuilding, pig farms and toilets that emptied directly into streams. But it's a very different story today. The world's most densely populated country now collects rainwater from two-thirds of its land, recycles wastewater and is even developing technology that mimics human kidneys to desalinate seawater. "In about a lifetime, we have transformed Singapore," said George Madhavan, an engineer who has worked for the national PUB water agency for 30 years and is now communications director. "It's not rocket science - it is more political will ... As governments around the world wrestle with water crises from droughts to floods, many are looking to the tiny Asian city-state of Singapore for solutions.