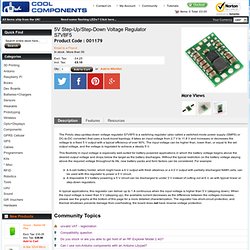 It takes an input voltage from 2.7 V to 11.8 V and increases or decreases the voltage to a fixed 5 V output with a typical efficiency of over 90%. The input voltage can be higher than, lower than, or equal to the set output voltage, and the voltage is regulated to achieve a steady 5 V. This flexibility in input voltage is especially well-suited for battery-powered applications in which the battery voltage begins above the desired output voltage and drops below the target as the battery discharges. Without the typical restriction on the battery voltage staying above the required voltage throughout its life, new battery packs and form factors can be considered. For example: Adjustable 4-12V Step-Up Voltage Regulator U3V50ALV. 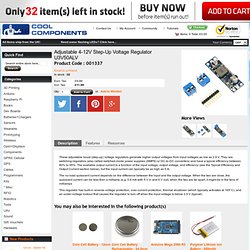 They are switching regulators (also called switched-mode power supplies (SMPS) or DC-to-DC converters) and have a typical efficiency between 80% to 95%. The available output current is a function of the input voltage, output voltage, and efficiency (see the Typical Efficiency and Output Current section below), but the input current can typically be as high as 5 A. The no-load quiescent current depends on the difference between the input and the output voltage. When the two are close, the quiescent current can be less then a milliamp (e.g. 0.6 mA with 5 V in and 6 V out); when the two are far apart, it might be in the tens of milliamps Connections. The energyShield - Power for your Arduino Creativity by NightShade Electronics. Have you experienced that moment of success when you complete a project on your Arduino? 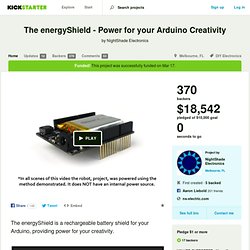 This glorious victory when the temperature displays on your LCD, or your LEDs flash in perfect succession. I've spent many long hours on projects seeking this moment, only to have it shattered by the realization that my creation is shackled to the USB port of my computer or the cord on an AC adapter. Sure, you could wire up a battery pack of sorts with a costly 9V battery or a pack of AAs; only adding to the amount of delicate circuitry. We knew there had to be a better way... After some trial and error, we have found the better way. NightShade Electronics is proud to introduce to you... What is it? What's Included All energyShields will include: energyShield (with everything soldered except the headers and battery)Battery (with bare leads)Header PinsPower Adapter (U.S.

Features. Switch Power Supply, Adj 1.23V-37V, 5V, 1A SW5AS : ERE, Electronics Store,Embedded,Modbus,I2C boards. [CES 2010] RCA Airnergy Charger Harvests Electricity From WiFi Signals. By Evan Ackerman This thing is, seriously, the highlight of CES for me (so far) this year. 3D TVs and eBook readers are fine, but there’s nothing amazing about them. 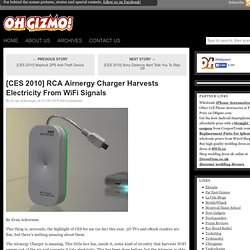 The Airnergy Charger is amazing. This little box has, inside it, some kind of circuitry that harvests WiFi energy out of the air and converts it into electricity. This has been done before, but the Airnergy is able to harvest electricity with a high enough efficiency to make it practically useful: on the CES floor, they were able to charge a BlackBerry from 30% to full in about 90 minutes, using nothing but ambient WiFi signals as a power source. The Airnergy has a battery inside it, so you can just carry it around and as long as you’re near some WiFi, it charges itself. Here is the really, really unbelievable part: RCA says that the USB charger will be available this summer for $40, and a battery with the WiFi harvesting technology will be available soon after. 3.7V Polymer Lithium Ion Battery - 1000mAh. Introduction These are very slim, extremely light weight batteries based on the new Polymer Lithium Ion chemistry. 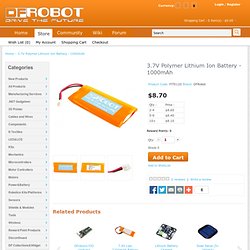 This is the highest energy density currently in production. Each cells outputs a nominal 3.7V at 900mAh! Lithium Battery Charger. The Arduino OBD-II Adapter works as a vehicle OBD-II data bridge for Arduino with open-source Arduino library provided. 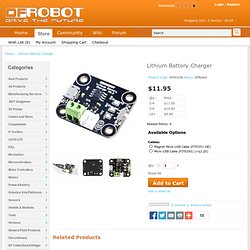 AA Boost Module. Ok, Ive been working on a simple code to stream GPS data to a webserver and then be able to locate it with Google Maps API. here is a WORKING example of what Ive done so far. 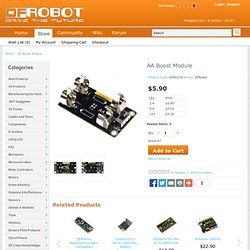 Before you begin, Im open to any suggestions and improvements. Again, ITS A SIMPLE CODE, It uses delays (because I know what the ATcommand answer will be) instead of interpreting the module answer. The only time it reads data, is when decoding GPS stream into Lat/Long strings. Im using [url= Module V3.0[/url] and Arduino UNO. ANyways... here is the arduino code: Shenzhen LC Technology Co.,Ltd. Ol Components 4-Channel Power-over-Ethernet Midspan Injector. Power-over-Ethernet uses your LAN to send power via the network cable to whatever device you have connected at the other end, saving you the hassle of plugging the device in to both the network and to power. 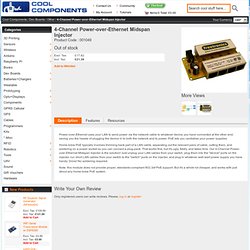 PoE lets you centralise your power supplies. PODs (power and I/O) PowerPOD 1117 3V3. Product description This PowerPOD is capable of taking a 4.4v to 16v input to give a 3.3v regulated output. 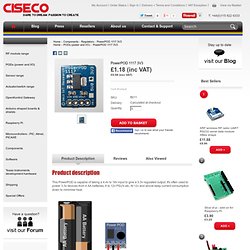 It's often used to power 3.3v devices from 4 AA batteries, 6 to 12v PSU's etc. At 12v and above keep current consumption down to minimise heat. The Power POD range make it really easy to swap, test, develop and build your projects. Rather than simple break out boards, all Power PODs follow the same layout so they are interchangeable.