Blueprint for water ‘control’? Pol says EPA made secret maps for new regulatory push. A top House Republican is charging that the Environmental Protection Agency secretly drafted highly detailed maps of U.S. waterways to set the stage for a controversial plan to expand regulatory power over streams and wetlands, a claim the EPA strongly denies. 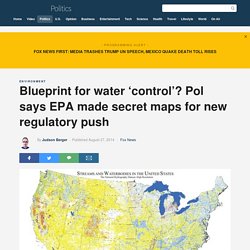 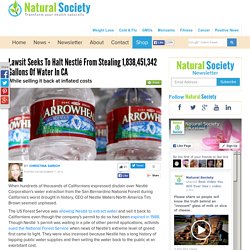 The US Forest Service was allowing Nestlé to extract water and sell it back to Californians even though the company’s permit to do so had been expired in 1988. Though Nestlé ‘s permit was waiting in a pile of other permit applications, activists sued the National Forest Service when news of Nestlé’s extreme level of greed first came to light. They were also incensed because Nestlé has a long history of tapping public water supplies and then selling the water back to the public at an exorbitant cost. Man Sentenced to 30 Days for Catching Rain Water on Own Property Enters Jail. Gary Harrington reports to Jackson County (Ore.) Jail to begin serving a 30-day term for collecting rainwater on his property. (Photo: Gary Harrington) (CNSNews.com) – Gary Harrington, the Oregon man convicted of collecting rainwater and snow runoff on his rural property surrendered Wednesday morning to begin serving his 30-day, jail sentence in Medford, Ore.

“I’m sacrificing my liberty so we can stand up as a country and stand for our liberty,” Harrington told a small crowd of people gathered outside of the Jackson County (Ore.) Jail. Several people held signs that showed support for Harrington as he was taken inside the jail. Harrington was found guilty two weeks ago of breaking a 1925 law for having, what state water managers called “three illegal reservoirs” on his property. Crowd of supporters outside Jackson County Jail, Wednesday August 8, 2012. "We as Americans, we need to stand on our constitutional rights, on our rights as citizens and hang tough.

The Groundwater Footprint: The Privatization of the World’s Water Resources. A study published by McGill University in Montreal and Utrecht University in the Netherlands, analyzed data from global ground water use against computer generated models of underwater aquifers and concluded that the “groundwater footprint” of reliable resources above ground is 3.5 times larger than the known aquifers. 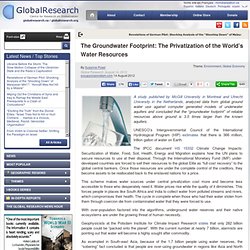 UNESCO’s Intergovernmental Council of the International Hydrological Program (HIP) estimates that there is 366 million, trillion gallon of water on Earth. The IPCC document HS 15332 Climate Change Impacts: Securitization of Water, Food, Soil, Health, Energy and Migration explains how the UN plans to secure resources to use at their disposal. Through the International Monetary Fund (IMF) under-developed countries are forced to sell their resources to the global Elite as “full cost recovery” to the global central bankers. Once those resources are under the complete control of the creditors, they become assets to be reallocated back to the enslaved nations for a price.

Fears of EPA ‘land grab’ create groundswell against water rule. Lawmakers are up in arms over an Environmental Protection Agency (EPA) proposal that they fear could give federal officials expansive new powers over private property and farmland. 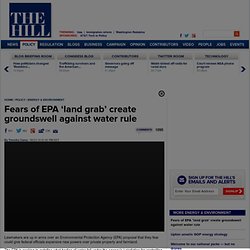 The EPA is seeking to redefine what bodies of water fall under the agency’s jurisdiction for controlling pollution. The scope of the final Clean Water Act (CWA) rule is of critical importance, as any area covered would require a federal permit for certain activities. The rule is facing a groundswell of opposition from lawmakers, who fear the EPA is engaged in a “land grab” that could stop farmers and others from building fences, digging ditches or draining ponds. More than 260 lawmakers, spanning both chambers and parties, have come out against the EPA’s action.

A group of 231 members of the House recently sent a letter to the EPA and the Army Corps asking them to withdraw the regulation. Those assurances haven’t won over lawmakers, who say the rule is exceptionally broad. » 25 Shocking Facts About The Earth’s Dwindling Water Resources Alex Jones' Infowars: There's a war on for your mind!

Wall Street Mega-Banks Are Buying Up The World’s Water. A disturbing trend in the water sector is accelerating worldwide. 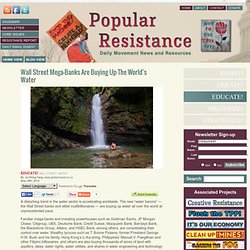 Billionaire T. It’s a strange New World Order in which multibillionaires and elitist banks can own aquifers and lakes, but ordinary citizens cannot even collect rainwater and snow runoff in their own backyards and private lands. The New “Water Barons”: Wall Street Mega-Banks are Buying up the World’s Water. This article was first published on December 21, 2012 by Market Oracle and Global Research A disturbing trend in the water sector is accelerating worldwide. 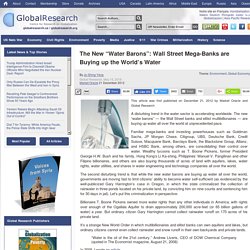