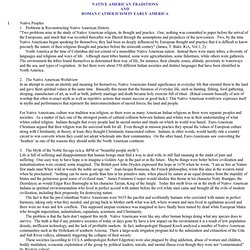 Native Peoples 1. Problems in Reconstructing Native American History “Two problems arise in the study of Native American religion, its thought and practice. North America at the time of did not consist of a monolithic Native American nation. 2. In an attempt to create an identity and meaning for themselves, Native Americans found significance in everyday life that oriented them to the land and gave them spiritual values at the same time. For Native Americans, culture was tradition was religion; so there were as many American Indian religions as there were separate peoples and societies. 3. Life is full of suffering and disappointment that human beings must find a way to deal with, to still find meaning in the midst of pain and suffering. The problem is that the facts don’t support this myth. 4. 1) “General responses to the new cultural forces were threefold.

CCFNA. Northwest Tribal Art. Native Americans Facts for Kids: An American Indian website for children and teachers. This website may look a little bit boring to you at first glance. 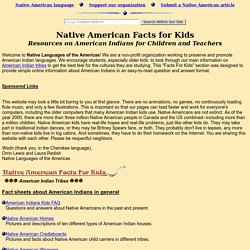 There are no animations, no games, no continuously loading flute music, and only a few illustrations. This is important so that our pages can load faster and work for everyone's computers, including the older computers that many American Indian kids use. Native Americans are not extinct. As of the year 2000, there are more than three million Native American people in Canada and the US combined--including more than a million children. 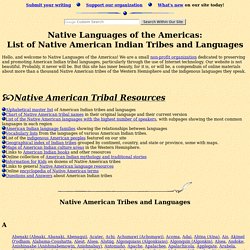 Hello, and welcome to Native Languages of the Americas! We are a small non-profit organization dedicated to preserving and promoting American Indian tribal languages, particularly through the use of Internet technology. Our website is not beautiful. Native American Tribal Resources Alphabetical master list of American Indian tribes and languages Chart of Native American tribal names in their original language and their current version List of the Native American languages with the highest number of speakers, with subpages showing the most common languages in each region. History of the Americas. The prehistory of the Americas (North, South, and Central America, and the Caribbean) begins with people migrating to these areas from Asia during the height of an Ice Age. 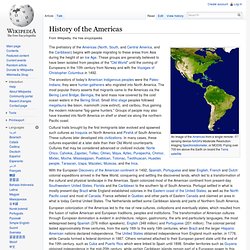 These groups are generally believed to have been isolated from peoples of the "Old World" until the coming of Europeans in the 10th century from Norway and with the Voyages of Christopher Columbus in 1492. The ancestors of today's American Indigenous peoples were the Paleo-Indians; they were hunter-gatherers who migrated into North America. The most popular theory asserts that migrants came to the Americas via the Bering Land Bridge, Beringia, the land mass now covered by the cold ocean waters in the Bering Strait. Small lithic stage peoples followed megafauna like bison, mammoth (now extinct), and caribou, thus gaining the modern nickname "big-game hunters. " Groups of people may also have traveled into North America on shelf or sheet ice along the northern Pacific coast.