Historic Sites Minnesota Historical Society. He Mille Lacs Indian Museum offers exhibits dedicated to telling the history of the Mille Lacs Band of Ojibwe and the issues and way of life of contemporary American Indian people who live on the reservation and the surrounding area. 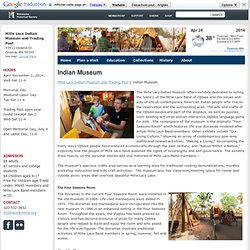 The arts and crafts of the Ojibwe people are part of the displays, as well as puzzles, loom beading activities and an interactive Ojibwe language game for kids. The centerpiece of the museum is the dramatic "Four Seasons Room" which features life-size dioramas modeled after actual Mille Lacs Band members. Other exhibits include "Our Living Culture," showing an array of contemporary pow-wow outfits and related activities; "Making a Living," documenting the many ways Ojibwe people have endured economically through the past century; and "Nation Within a Nation," exploring how the people of Mille Lacs have asserted the rights of sovereignty and self-governance. The First Thanksgiving: Voyage on the Mayflower. 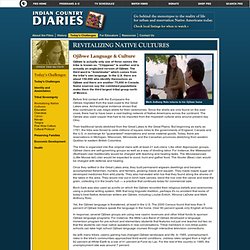 Archeological evidence shows that they continued to use miigis shells for their ceremonies. Since the shells are only found on the east coast, there had to have been a vast trading network of Native Americans across the continent. The Ojibwe also used copper that had to be imported from the Hopewell cultural area around present day Ohio. Their traditional lands stretched from the Great Lakes to the Great Plains. The tribe is organized into five original clans with at least 21 sub-clans. Native American Jeopardy. Native American Homes: Wigwams, Longhouses, Tepees, Lodges, and other American Indian houses. There were many different types of American Indian houses in North America. 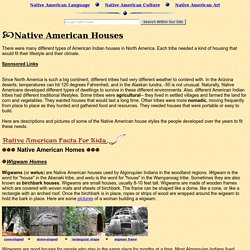 Each tribe needed a kind of housing that would fit their lifestyle and their climate. Sponsored Links Since North America is such a big continent, different tribes had very different weather to contend with. Fishhooks Of North America & The World, Page 1. American Indians and their Environment. In this lesson, students will analyze primary source images of Native Americans interacting with the environment. 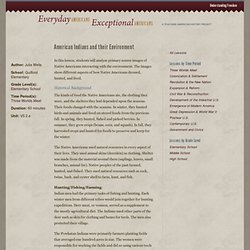 The images show different aspects of how Native Americans dressed, hunted, and lived. Historical Background. Encyclopedia of the Great Plains. Traditionally, Plains Indian gender roles were well defined, and men's and women's responsibilities were equally crucial to the functioning, even the survival, of their societies. 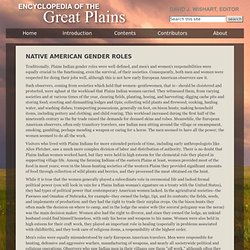 Consequently, both men and women were respected for doing their jobs well, although this is not how early European American observers saw it. Such observers, coming from societies which held that women–gentlewomen, that is– should be cloistered and protected, were aghast at the workload that Plains Indian women carried. They witnessed them, from varying societies and at various times of the year, clearing fields, planting, hoeing, and harvesting; digging cache pits and storing food; erecting and dismantling lodges and tipis; collecting wild plants and firewood; cooking, hauling water, and washing dishes; transporting possessions, generally on foot, on bison hunts; making household items, including pottery and clothing; and child rearing. David J. Wishart University of Nebraska-Lincoln. Respect runs deep in ancient native american spirituality. It isn't hard to see the depth of native American spirituality just by looking at their handmade craft works. 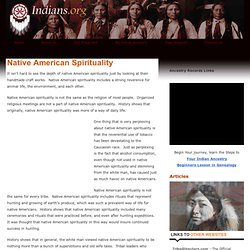 Edit Template - JeopardyLabs. Moa.wfu.edu/files/2012/04/Fun-and-Games-Teachers-Guide.pdf. 3_3 European Disease in the New World. Until the coming of the Europeans, the New World was free of smallpox, typhus, cholera, and measles--the focus of this article. 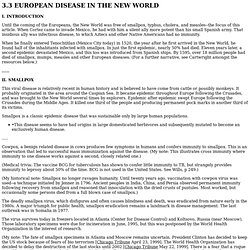 When Cortez came to invade Mexico, he had with him a silent ally more potent than his small Spanish army. That insidious ally was infectious disease, to which Aztecs and other Native Americans had no immunity. When he finally entered Tenochtitlan (Mexico City today) in 1520, the year after he first arrived in the New World, he found half of the inhabitants infected with smallpox. In just the first epidemic, nearly 50% had died. Eleven years later, a second epidemic devastated Mexico, and this too was introduced from Spanish ships. This viral disease is relatively recent in human history and is believed to have come from cattle or possibly monkeys. Smallpox is a classic epidemic disease that was sustainable only by large human populations. Cowpox, a benign related disease in cows produces few symptoms in humans and confers immunity to smallpox. Resources. 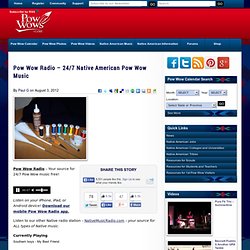 Ojibwe History - Indian Country Wisconsin. The Ojibwe are an Algonkian-speaking tribe and constitute the largest Indian group north of Mexico. 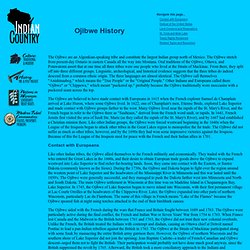 The Ojibwe stretch from present-day Ontario in eastern Canada all the way into Montana. Oral traditions of the Ojibwe, Ottawa, and Potawatomi assert that at one time all three tribes were one people who lived at the Straits of Mackinac. From there, they split off into three different groups. Linguistic, archeological, and historical evidence suggests that the three tribes do indeed descend from a common ethnic origin. The three languages are almost identical. 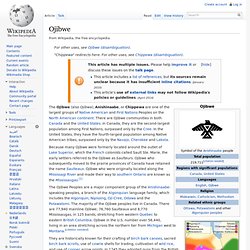 Ojibway Culture and History. Automatic Language Translator (Espanol, Francaise, Deutsche,etc.) Kevin L. CallahanU of MN Email: call0031@tc.umn.edu Spelling: Ojibwe, Ojibwa, or Ojibway? According to Professor Dennis Jones who teaches the Ojibway language at the University of Minnesota, either Ojibwe or Ojibway are actually correct spellings, but some people feel Ojibwe should be the preferred standardized spelling. I have chosen to use the Ojibway spelling only because that is the way I originally learned it. Ojibwe Indians. The Chippewa Indians, also known as the Ojibway or Ojibwe, lived mainly in Michigan, Wisconsin, Minnesota, North Dakota, and Ontario. They speak a form of the Algonquian language and were closely related to the Ottawa and Potawatomi Indians. The Chippewas were allies of the French and French traders often married Chippewa women. Chippewa warriors fought with the French against the British in the French and Indian War.

But political alliances changed with the times. During the American Revolution the Chippewas sided with the British against the Americans. The Ojibwe (said to mean "Puckered Moccasin People"), also known as the Chippewa, are a group of Algonquian-speaking bands who amalgamated as a tribe in the 1600's. Click here for full size image (220 kb) Source: Atlas of Wisconsin. Dakota Indians (Dakotas, Dakota Sioux) Dakota Tribe What is the difference between the Lakota and Dakota Sioux? What do these words mean? There is no real difference. "Lakota" and "Dakota" are different pronunciations of the same tribal name, which means "the allies.

" One Sioux dialect has the letter "L" in it, and the other dialect does not. "Sioux," on the other hand, is not a Lakota or Dakota name. History of Minnesota. Digital History. Colonial history of the United States.