Legafrik. GrowthAfrica – Accelerates high potential entrepreneurs in Africa. Ensuring women are part of Africa's growth story. Nurturing Entrepreneurship. African Entrepreneur Collective. African economies are some of the fastest growing in the world, but that growth threatens to leave behind a generation of youth. 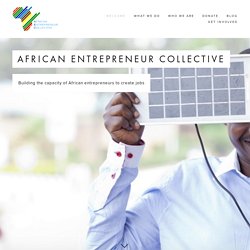 With 200 million people aged 15 to 24, Africa has the youngest population in the world. And yet, 60% of all unemployed in Africa are youth, and that doesn’t count young people who are underemployed with low pay and few advancement opportunities. Rwanda exemplifies both the challenge and the opportunity facing youth. Roughly 70% of the population is under 35 years old, and the majority of the population works in subsistence farming. While private sector growth can create jobs for thousands of young people moving off farms each year, Rwanda’s private sector is currently dominated by small enterprises that employ just 1-2 people. AEC seeks to change that paradigm. Africa Rizing - Connecting the next generation of global influencers from across the Continent, and around the world to engage in, ‘a smarter conversation’ 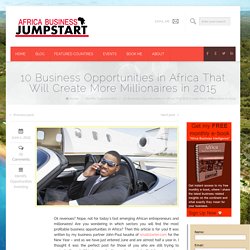 Media and Entertainment Africa’s film industry has become a global and cultural phenomenon that enjoys a huge following within and outside the continent. The industry serves an audience that’s hungry for African stories of love, drama, intrigue, comedy, redemption, action and more. It’s no surprise that Africa’s film industry is currently the third largest in the world behind Hollywood and India’s “Bollywood”. ‘30 Days in Atlanta‘ is a Nigerian romantic comedy film that was released in late 2014. Jason Njoku who lived in Manchester, UK, made use of the demands in the film industry in 2011.

But it’s not just the Africa’s film industry that’s on the rise. 2. The opportunities in Africa’s food and agribusiness space remain huge and will not go out of fashion anytime soon. Food production is still a huge and breathtaking opportunity. The opportunities in food and agribusiness cover several different products across the value chain. African Scholarships. Opportunities for Africans. ...the one stop place for all opportunities. Accueil – A+ Le meilleur de l'Afrique. Ventures Africa - African Business, Financial & Economic News. Let's Imagine The New Africa ! Home - The Promota Magazine. Africa Top Success. Marketing and Media in South Africa. 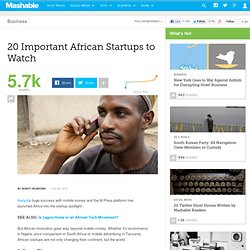 But African innovation goes way beyond mobile money. Whether it’s ecommerce in Nigera, price comparison in South Africa or mobile advertising in Tanzania, African startups are not only changing their continent, but the world. 1. Saya - Ghana Chat messaging clients are hugely popular across Africa. 2. Ushahidi, which means "testimony" in Swahili, was initially a website developed to map reports of violence around the 2008 Kenyan election. 3. Digital and mobile advertising is big business everywhere, including Africa. 4. In Lagos, a city of 21 million people with 30,000 more arriving every day, the idea of running an online grocery business seems insane, but Gloo somehow manages to grow. 5.