Nampak Plans Glass Factories in Africa's Most Populous Nations. Nampak Ltd. has agreed with partners to build glass-bottle manufacturing plants to take advantage of growing demand for packaged consumer goods and bottled drinks in the two countries where a quarter of Africans live -- Nigeria and Ethiopia. 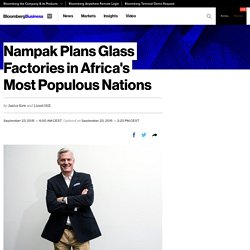 The Johannesburg-based company has reached a preliminary agreement with a partner for a factory in Ethiopia and is now seeking financing for a project with a potential cost of $68 million, Chief Executive Officer Andre de Ruyter, 47, said in an interview at Bloomberg’s Johannesburg office last week. That will help supply drinks makers including brewer Heineken NV and soft drinks producer Coca-Cola Inc, he said.

Nampak has also “made good progress” on a Nigerian factory, the CEO said. “Africa is the story for us,” De Ruyter said. Egypt's 2014 trade with COMESA totals $2.6 billion - Minister. Various opportunities for exporting to Africa: Minister of Industry. Newly-appointed Minister of Industry and Trade Tarek Qabil indicated that Egypt is very keen on expanding the horizons of cooperation with all African countries, according to a statement from the ministry. 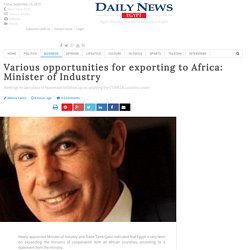 This came during his meeting with Sindiso Ngwenya, Secretary General of the Common Market for Eastern and Southern Africa (COMESA), who is currently visiting Egypt to attend the official opening of the African Export-Import Bank (Afreximbank). Qabil further highlighted the importance of opening new horizons for trade and investment with African countries, while working on opening up new markets in those countries for exporting Egyptian products. Uganda, Rwanda to Get Shs 28 Billion Cross-Border Market - allAfrica.com. The Ministry of Trade, Industry and Cooperatives under the Regional Integration Implementation Program (RIIP) is set to construct an agricultural cross-border market in Kabale to serve both Uganda and Rwanda. 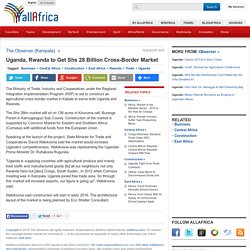 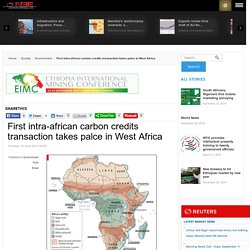 The transaction, which has been structured by ecosur afrique, allows VRS customers to offset the CO2 emissions of vehicles leased in Ghana, Côte d’Ivoire and Senegal. Thomas Crand, the co-founder of VRS, states:"We develop a strong environmental strategy; CO2 emissions are at the heart of our concerns and we are pleased to offer our customers the option to offset their carbon footprint. Today’s transaction is pioneering and a unique choice, which distinguishes us on the West African market. 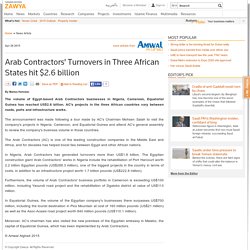 AC's projects in the three African countries vary between roads, ports and infrastructure works. The announcement was made following a tour made by AC's Chairman Mohsen Salah to visit the company's projects in Nigeria, Cameroon, and Equatorial Guinea and attend AC's general assembly to review the company's business volume in those countries. The Arab Contractors (AC) is one of the leading construction companies in the Middle East and Africa, and for decades has helped boost ties between Egypt and other African nations. Business : quand les champions égyptiens redécouvrent l'Afrique. Biya, Osinbajo to Formally Open Dangote Cement Plant in Cameroon. By Crusoe Osagie President of Cameroun, Paul Biya and Nigeria's Vice-President, Professor Yemi Osinbajo, are expected to lead the top echelon of the public and private sector operators in both Cameroun and Nigeria to the formal inauguration of Dangote Group's 1.5 million metric tonnes per annum (mmtpa) capacity cement plant at the Douala Ports, Cameroun on Thursday. 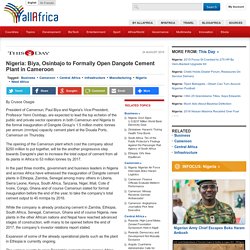 The opening of the Cameroun plant which cost the company about $250 million to put together, will be the another progressive step towards Dangote's plan to increase the total output of cement from all its plants in Africa to 53 million tonnes by 2017. East Africa: Five Ways to Ignite Intra-African Trade in Services to Support Growth. Opinion By Mukhisa Kituyi When you google the words "Africa's economy," images of women balancing baskets on their heads, men picking cotton in the fields, and young children toiling in the mines pop up on the screen. 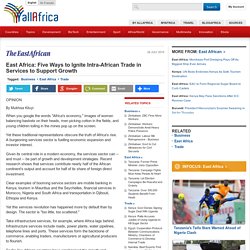 Yet these traditional representations obscure the truth of Africa's rise. A burgeoning services sector is fuelling economic expansion and investor interest. Given its central role in a modern economy, the services sector can -- and must -- be part of growth and development strategies. Nigeria’s Biggest Miller Targets Acquisitions for Growth. Flour Mills of Nigeria Plc, the country’s biggest miller by market value, will seek expansion opportunities in Africa after streamlining its domestic business to focus on food in the continent’s biggest economy. 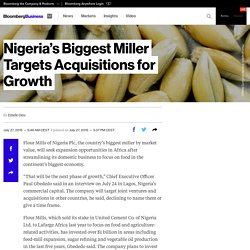 “That will be the next phase of growth,” Chief Executive Officer Paul Gbededo said in an interview on July 24 in Lagos, Nigeria’s commercial capital. The company will target joint ventures and acquisitions in other countries, he said, declining to name them or give a time frame. Flour Mills, which sold its stake in United Cement Co. of Nigeria Ltd. to Lafarge Africa last year to focus on food and agriculture-related activities, has invested over $1 billion in areas including feed-mill expansion, sugar refining and vegetable oil production in the last five years, Gbededo said. The company plans to invest in sorghum mills at its Northern Nigeria Flour Mills unit with a target of 20,000 to 30,000 metric tons of the foodstuff annually in the next three to five years, he said. Morocco's BCP takes control of BIA-Niger bankMorocco. 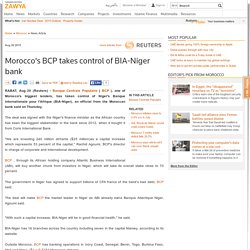 The deal was signed with the Niger's finance minister as the African country has been the biggest stakeholder in the bank since 2012, when it bought it from Coris International Bank. Zim-Mozambique trade grows 64pc in 2 years. TRADE between Zimbabwe and Mozambique grew 64 percent to $725 million in two years to 2014, attributed to an operational bilateral trade agreement, which gives two countries duty concessions to qualifying products. 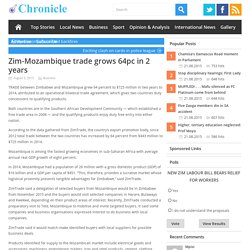 Both countries are in the Southern African Development Community — which established a free trade area in 2008 — and the qualifying products enjoy duty free entry into either nation. According to the data gathered from ZimTrade, the country’s export promotion body, since 2012 total trade between the two countries has increased by 64 percent from $443 million to $725 million in 2014.

Mozambique is among the fastest growing economies in sub-Saharan Africa with average annual real GDP growth of eight percent. Shoprites Plans Big Expansion, To Open 35 Stores in Africa, 14 in Nigeria. South Africa’s Shoprite Holdings is undoubtedly Africa’s biggest retailer by sales. The retailer, which began as a chain of eight stores in South Africa in 1979 has 189 stores outside South Africa and is on the move for greater expansion. The retailer, which also operates the Checkers grocery chain and OK Furniture, reported a 10.8 per cent rise in full-year earnings on 18th August , buoyed by sales growth of 13.5 per cent in stores outside its home market. Last year it opened 20 stores outside SA. Shoprite is depending on fast growth in markets such as Nigeria and Angola where it is changing the shopping habits of Africa’s middle class. While there are plans to open new 35 stores across Africa before the end of the year, Nigeria will get 14 new stores in the next 20 months.

The Ivorian businessman came to present to Minister Nganou Djoumessi the progress of his plan to create a cocoa consortium in Cameroon. It is an agro-industrial project in three parts, including the creation of cocoa farms in the country, the construction of a cocoa processing plant and the setting up of a producers’ association. The project has been so well received by the Cameroonian authorities that it falls in with plans to revive the cocoa-coffee sector, adopted by the Cameroonian government in September 2014. Implemented at the start of 2015, the plan aims to produce 600,000 tonnes nationally by 2020 against the current annual average of 200,000 tonnes.

Posted on Thursday, 02 July 2015 06:57 Photo©Reuters Cameroon is set to add 400 megawatts to its current 1,200 megawatts of electricity as Morocco's Platinum Power's plans to build a hydroelectric project in the central African country. Platinum Power, a subsidiary of U.S. private equity firm Brookstone Partners, says plans to invest 500 billion CFA francs ($845.87 million) to build a hydroelectric project in Cameroon, the company said. Platinum plans to sell this renewable energy to ENEO The firm signed a framework public, private partnership agreement with the Cameroonian government on Wednesday to build a 400 megawatt capacity complex in Makay, in the country's Centre Region. Somalia government offers nine million hectares to Egypt.