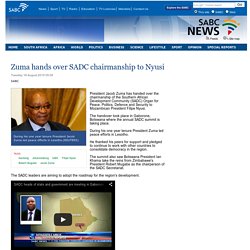 (REUTERS) President Jacob Zuma has handed over the chairmanship of the Southern African Development Community (SADC) Organ for Peace, Politics, Defence and Security to Mozambican President Filipe Nyusi. The handover took place in Gaborone, Botswana where the annual SADC summit is taking place. During his one year tenure President Zuma led peace efforts in Lesotho.

He thanked his peers for support and pledged to continue to work with other countries to consolidate democracy in the region. Call for stronger SADC leadership:Tuesday 18 August 2015. The SADC Summit is in its final day(SABC) Political leaders are calling for stronger leadership in the Southern African Development Community (SADC) as Botswana President Ian Khama assumes the chairpersonship from Zimbabwean President Robert Mugabe. 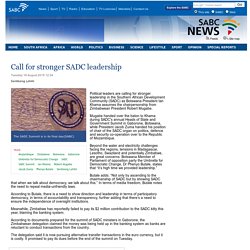 Mugabe handed over the baton to Khama during SADC's annual Heads of State and Government Summit in Gaborone, Botswana, while President Jacob Zuma handed his position of chair of the SADC organ on politics, defence and security co-operation over to the Republic of Mozambique. Beyond the water and electricity challenges facing the regions, tensions in Madagascar, Lesotho, Swaziland and potentially Zimbabwe, are great concerns. Botswana Member of Parliament of opposition party the Umbrella for Democratic Change, Dr Phenyo Butale, states that “it’s high time we provided leadership.” Butale adds: “Not only by ascending to the chairmanship of SADC but by showing SADC that when we talk about democracy, we talk about this.” SABC News - Development problems to dominate SADC summit:Monday 17 August 2015.

The 35th summit gets underway in Botswana on Monday. 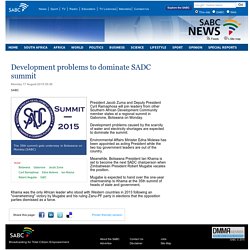 (SABC) President Jacob Zuma and Deputy President Cyril Ramaphosa will join leaders from other Southern African Development Community member states at a regional summit in Gaborone, Botswana on Monday. Development problems caused by the scarcity of water and electricity shortages are expected to dominate the summit. Environmental Affairs Minister Edna Molewa has been appointed as acting President while the two top government leaders are out of the country.

Meanwhile, Botswana President Ian Khama is set to become the next SADC chairperson when Zimbabwean President Robert Mugabe vacates the position. Mugabe is expected to hand over the one-year chairmanship to Khama at the 35th summit of heads of state and government. Khama was the only African leader who stood with Western countries in 2013 following an "overwhelming" victory by Mugabe and his ruling Zanu-PF party in elections that the opposition parties dismissed as a farce. SABC News - SADC Summit to prioritise energy shortage:Sunday 16 August 2015. International Relations minister Maite Nkoana-Mashabane is part of the South African SADC delegation. 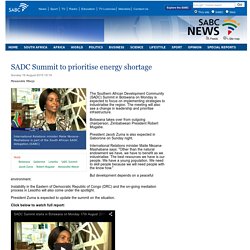 (SABC) The Southern African Development Community (SADC) Summit in Botswana on Monday is expected to focus on implementing strategies to industrialise the region. The meeting will also see a change in leadership and prioritise infrastructure. Botswana takes over from outgoing chairperson, Zimbabwean President Robert Mugabe. President Jacob Zuma is also expected in Gaborone on Sunday night. International Relations minister Maite Nkoana-Mashabane says: "Other than the natural endowment we have, we have to benefit as we industrialise. 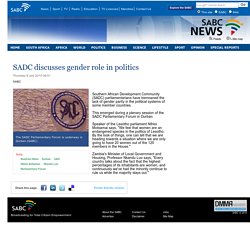 (SABC) Southern African Development Community (SADC) parliamentarians have bemoaned the lack of gender parity in the political systems of some member countries. This emerged during a plenary session of the SADC Parliamentary Forum in Durban. Speaker of the Lesotho parliament Nthloi Motsamai says, "We feel that women are an endangered species in the politics of Lesotho. By the look of things, one can tell that we are heading towards a situation where we are only going to have 20 women out of the 120 members in the House.

" Zambia's Minister of Local Government and Housing, Professor Nkandu Luo says, "Every country talks about the fact that the highest percentages of its inhabitants are women, and continuously we've had the minority continue to rule us while the majority stays out. " SABC News - SA, SADC to sign economic deal with European Union :Monday 21 July 2014. Trade and Industry Minister Rob Davies announced that SA and its SADC counterparts are on the verge of signing a new and improved economic partnership with the EU. 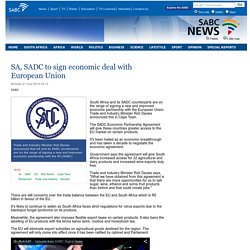 (SABC) South Africa and its SADC counterparts are on the verge of signing a new and improved economic partnership with the European Union. Trade and Industry Minister Rob Davies announced this in Cape Town. The SADC Economic Partnership Agreement will give these countries greater access to the EU market on certain products. It's been hailed as an economic breakthrough and has taken a decade to negotiate the economic agreement. Government says the agreement will give South Africa increased access for 32 agricultural and dairy products and increased wine exports duty free. Trade and Industry Minister Rob Davies says, "What we have obtained from this agreement is that there are more opportunities for us to sell sugar, wine, ethanol and some fruit products than before and that could create jobs. " Lesotho welcomes SADC help on Mahao’s death:Thursday 2 July 2015. The SADC Troika meeting on Lesotho will be held in Pretoria on Friday(REUTERS) The South African Development Community (SADC) Chairperson and Zimbabwe President Robert Mugabe is to arrive in South Africa on Thursday ahead of the Double Troika summit on Lesotho. 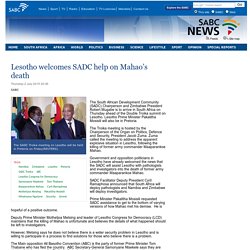 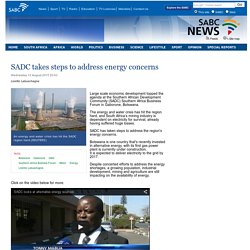 Despite concerted efforts to address the energy shortages, a growing population, industrial development, mining and agriculture are still impacting on the availability of energy. Click on the video below for more.