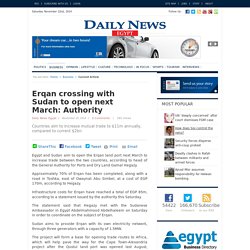 Approximately 70% of Erqan has been completed, along with a road in Toshka, east of Owaynat Abu Simbel, at a cost of EGP 170m, according to Hegazy. Infrastructure costs for Erqan have reached a total of EGP 85m, according to a statement issued by the authority this Saturday. The statement said that Hegazy met with the Sudanese Ambassador in Egypt Abdelmahmood Abdelhaleem on Saturday in order to coordinate on the subject of Erqan.

Gambia to open air route to Mauritania. Famous Brands hatches ambitious Africa plans. FAMOUS Brands, the owner of brands such as Debonairs and Steers, has ambitious expansion plans for oil-rich African countries such as Nigeria, Ghana and Angola. 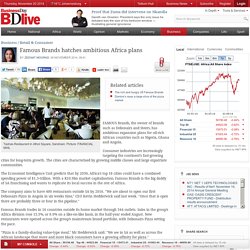 Consumer industries are increasingly targeting the continent’s fast-growing cities for long-term growth. The cities are characterised by growing middle classes and large expatriate communities. The Economist Intelligence Unit predicts that by 2030, Africa’s top 18 cities could have a combined spending power of $1.3-trillion. With a R10.9bn market capitalisation, Famous Brands is the big daddy of SA franchising and wants to replicate its local success in the rest of Africa. Business Newswires : euronews : the latest international news as video on demand.

Reuters, 19/11 16:42 CET By Stephen Kalin CAIRO (Reuters) – Three African economic blocs will merge into a new 27-nation free-trade zone under an agreement to be signed in Cairo next month, uniting markets worth 58 percent of the continent’s economic activity, Egypt’s industry and trade minister said. 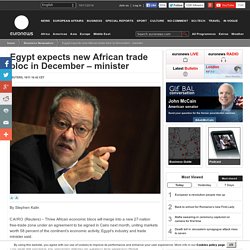 The deal will combine the Common Market for Eastern and Southern Africa (COMESA), the South African Development Community (SADC), and the East African Community (EAC). Minister Mounir Fakhry Abdel Nour said Cairo is also pursuing trade agreements with the Eurasian Economic Community and the South American trade bloc Mercosur in order to win back foreign investors who left Egypt due to the political turmoil that began with a popular uprising in 2011. Des projets de partenariat algéro-tunisiens identifiés dans le BTPH. South Africa: SA and Congo to Join Forces to Generate Electricity. Document The Portfolio Committee on Energy and the Select Committee on Economic and Business Development received a briefing from the Department of Energy today on the treaty of the Grand Inga Hydropower Project between the Republic of South Africa and the Democratic Republic of Congo (DRC) as well as the explanatory memorandum to the treaty on the Grand Inga Hydropower Project. 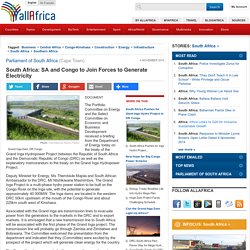 Deputy Minister for Energy, Ms Thembisile Majola and South African Ambassador to the DRC, Mr Ntshikiwane Mashimbye. The Grand Inga Project is a multi-phase hydro power station to be built on the Congo River on the Inga site, with the potential to generate approximately 40 000MW. The Inga dams are located in the western DRC 50km upstream of the mouth of the Congo River and about 225km south west of Kinshasa. Associated with the Grand Inga are transmission lines to evacuate power from the generators to the markets in the DRC and to export markets. 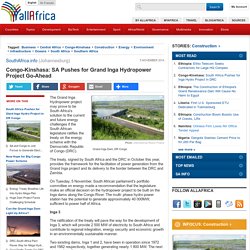 The treaty, signed by South Africa and the DRC in October this year, provides the framework for the facilitation of power generation from the Grand Inga project and its delivery to the border between the DRC and Zambia. On Tuesday, 5 November, South African parliament's portfolio committee on energy made a recommendation that the legislature make an official decision on the hydropower project to be built on the Inga dams along the Congo River. Une autoroute sur la bonne voie. Dangote Cement starts production in South Africa; next Senegal, Ethiopia. Aliko Dangote: plant starts production in South Africa. 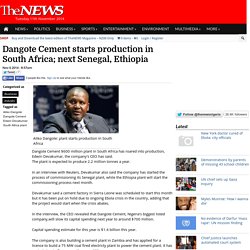 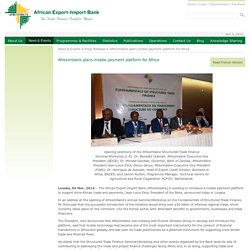 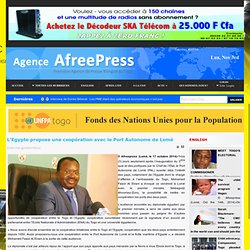 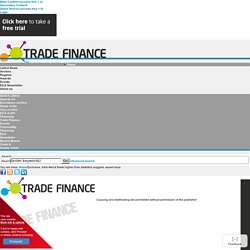 Rwanda: Why Kenyans and Their Businesses Are Running to Rwanda. Analysis In August 2013, a historical event unfolded on Africa's biggest Safari land, Kenya. 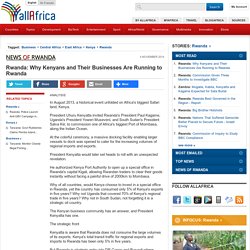 President Uhuru Kenyatta invited Rwanda's President Paul Kagame, Uganda's President Yoweri Museveni, and South Sudan's President Salva Kiir, to commission one of Africa's biggest Port of Mombasa, along the Indian Ocean. At the colorful ceremony, a massive docking facility enabling larger vessels to dock was opened to cater for the increasing volumes of regional imports and exports. Kenyan pharmaceutical manufacturer Dawa Limited to expand regionally. Nairobi (HAN) November 4, 2014. With a growing population and obvious market demand, Kenyan pharmaceutical manufacturer Dawa Limited has big ambitions of expanding its reach across 30 countries in Africa over the next five years. Dawa is already active in 10, distributing a range of 140 products for both human and animal use. Kenya is one of few countries in Africa with a robust pharmaceutical manufacturing industry. The East African nation has over 30 manufacturers and Dr Ajay Patel, managing director of Dawa, says there is opportunity to expand regionally.

Some of the countries Dawa (Swahili for medicine) is eyeing include Nigeria, Ghana, Madagascar, Angola, Sudan and Ethiopia. The company has started exporting to Côte d’Ivoire, Togo, Benin and Senegal. Dangote Seeks Approval For Tanzania Power Plant Development. VENTURES AFRICA – Africa’s business mogul and President of the Dangote Group, Alhaji Aliko Dangote has sought regulatory approval to commence development of a coal-fired plant. The plant is expected to power a Dangote owned $500 million cement factory in Mtwara, Tanzania. “Dangote Industries applied for a 75 MW electricity generation licence to build, own and operate a coal-based captive power plant adjacent to its cement manufacturing plant,” a statement released by state-run Energy and Water Utilities Regulatory Authority (EWURA) said on Tuesday.

Construction at the cement facility has already commenced and should be commissioned next year. It holds a production capacity of 3 million tonnes per annum Tanzania, East Africa’s second largest economy, is expected to grow at seven percent in five years with influx from manufacturing and mining sector. Interview: Morocco pushes finance hub for sub-Saharan Africa. Rwanda issues new visa policy for African citizens. Copyright : APA -All African citizens will from now on get their entry visa upon arrival at any Rwanda entry point without prior application, following new updated visa regulations and policy that were adopted by the Rwandan government, an official source revealed Monday in Kigali. According to a statement issued in Kigali by the Directorate General of Immigration and Emigration, the new visa policy will take effect from 1 November and citizens from member countries of the East African Community (EAC) including Burundi, Kenya, Uganda and Tanzania will continue to be issued with 6 months visitors pass with no fees.

However, citizens from the Democratic Republic of Congo (DRC) will continue getting visitors visas for a stay not exceeding 90 days with no fees as provided by the Economic Community of the Great Lakes Region (CEPGL). Zimbabwe: Namibia Signs New Power Purchase Agreement With Zimbabwe. Windhoek — Namibia and Zimbabwe yesterday (Thursday) signed a new 15-year 80 megawatt (MW) Power Purchase Agreement (PPA) at the NamPower headquarters in Windhoek.

The new PPA between the NamPower and the Zimbabwean Power Company (ZPC) forms part of the latter's strategy to raise funding to enable them to expand the Kariba South Hydro Power Station in Zimbabwe by 300MW. The current capacity of the power station is approximately 700MW and will be approximately 980MW after the expansion. According to the financing institution of the agreement, Standard Bank, the first three years of the agreement is valued at N$500 million. The agreement signed yesterday will become effective once the existing Zimbabwe Electricity Supply Authority (ZESA) agreement comes to an end early next year, not later than April 01, 2015. Ghana to co – manage Togo & Benin airspace. The Ghana Civil Aviation Authority (GCAA) has commenced talks with Togo and Benin to co-manage their respective upper airspace.

Togo and Benin have requested for autonomy from Ghana in the management of their respective upper airspace, as contention over revenue deepens. The internationally designated Accra Flight Information Region (FIR) which refers to the combined upper airspace and large portions of the Atlantic Ocean of Ghana, Togo, and Benin has been managed by the Ghana Civil Aviation Authority on behalf of the three countries for decades.

African continent could become a competitive field for property developers - eProp Commercial Property News. African continent could become a competitive field for SA's property developers if the early movers act as catalysts. This was the view of property industry executives and analysts who attended the Africa Property InvestmentThe purchase or exchange of any asset or right to an asset by an investor with the aim of making a profit. Use of Angolan kwanza to begin in 6 months - Read Namibian National News. SANTA CLARA, Angola – Trading in the Angolan kwanza at Oshikango in Namibia and using the Namibian dollar in Santa Clara, Angola, would commence in the next six months, once bank personnel have been trained on security features of the two currencies, and relevant banking infrastructure are in place.

Il faudra aussi compter avec les mesures non tarifaires, (certificats d’importation, contrôles qualité…) appliquées de manière non équitable ainsi qu’avec les multiples régimes fiscaux. Kenya secures $113m to build 1,550km road connecting Burundi. By Christabel Ligami and Adam Ihucha Kenya has secured $113 million from the African Development Bank for the construction of a transit route from the Indian Ocean to Bujumbura in Burundi, heightening competition between the ports of Indian Ocean to Bujumbura in Burundi,. The 1,550-kilometre road will be 455km shorter than the Northern Corridor, which runs from Kenya to the landlocked economies of Uganda, Rwanda, Burundi, DR Congo and South Sudan, and about 50km shorter than the Central Corridor, which connects Rwanda, Uganda, Burundi and DR Congo to the port of Dar es Salaam in Tanzania.