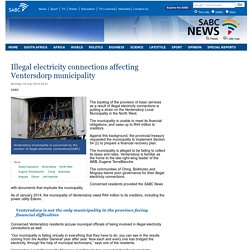 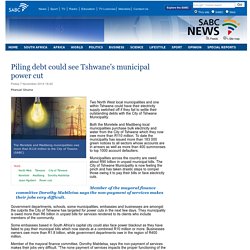 (SABC) Two North West local municipalities and one within Tshwane could have their electricity supply switched off if they fail to settle their outstanding debts with the City of Tshwane Municipality. Both the Moretele and Madibeng local municipalities purchase bulk electricity and water from the City of Tshwane which they now owe more than R110 million. To date the municipality has issued more than 183 000 green notices to all sectors whose accounts are in arrears as well as more than 400 summonses to top 1000 account defaulters. Municipalities across the country are owed about R90 billion in unpaid municipal bills. 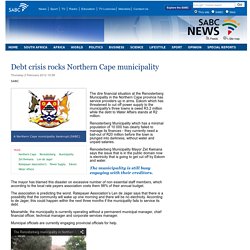 (SABC) The dire financial situation at the Renosterberg Municipality in the Northern Cape province has service providers up in arms. Eskom which has threatened to cut off power supply to the municipality's three towns is owed R3.2 million while the debt to Water Affairs stands at R2 million. Renosterberg Municipality which has a minimal population of 10 000 has clearly failed to manage its finances - they currently need a bail-out of R20 million before the town is plunged into darkness, without water and unpaid salaries.

Renosterberg Municipality Mayor Zet Kwinana says the issue that is in the public domain now is electricity that is going to get cut off by Eskom and water. The municipality is still busy engaging with their creditors. The mayor has blamed this disaster on excessive number of non essential staff members, which according to the local rate payers association costs them 98% of their annual budget. Eskom, EC municipalities reach concensus over debt:Thursday 8 March 2012. E Cape residence will not be left in darkness(SABC) Eskom in the Eastern Cape says it has reached a compromise with the local municipalities over money owed to the power utility as well as possible power cuts. 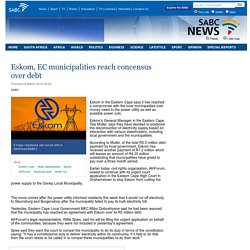 Eskom’s General Manager in the Eastern Cape, Tais Muller, says they have decided to postpone the disconnection of electricity supply based on interaction with various stakeholders, including local government and the municipalities. According to Muller, of the total R5.5 million debt payment by local government, Eskom has received another payment of R1.2 million which still leaves an amount of R4.35 million outstanding that municipalities have greed to pay over a three month period. Earlier today, civil rights organisation, AfriForum, vowed to continue with its urgent court application in the Eastern Cape High Court in Grahamstown to stop Eskom from cutting the power supply to the Gariep Local Municipality. Bekkersdal municipality faces liquidity:Wednesday 26 February 2014. Bekkersdal residents went on the rampage last year, destroying municipal property and barricading roads with stones in protest over lack of services in the area. 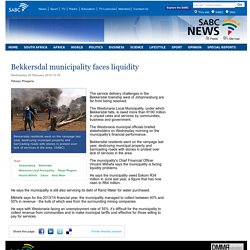 (SABC) The service delivery challenges in the Bekkersdal township west of Johannesburg are far from being resolved. The Westonaria Local Municipality, under which Bekkersdal falls, is owed more than R190 million in unpaid rates and services by communities, business and government. The Westonaria municipal officials briefed stakeholders on Wednesday morning on the municipality's financial performance.

Bekkersdal residents went on the rampage last year, destroying municipal property and barricading roads with stones in protest over lack of services in the area. Mpumalanga municipalities owe Eskom over R800 million:Thursday 29 August 2013. Msukaligwa and Govan Mbeki municipalities in Mpumalanga might be placed under administration. 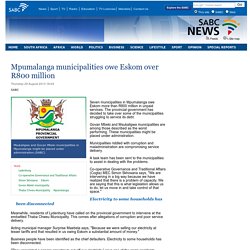 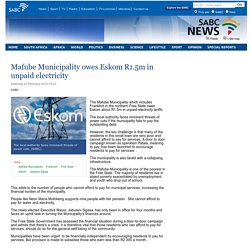 (SABC) The Mafube Municipality which includes Frankfort in the northern Free State owes Eskom about R1.5m in unpaid electricity tariffs. The local authority faces imminent threats of power cuts if the municipality fails to pay the outstanding debt. However, the key challenge is that many of the residents in this small town are very poor and cannot afford to pay for services. A door to door campaign known as operation Patala, meaning to pay, has been launched to encourage residents to pay for services. . Eskom worried about debt owed to it by municipalities. Treasury withholds transfers to municipalities.