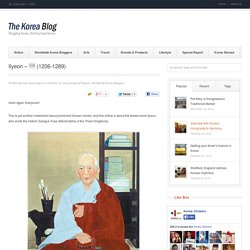 This is yet another installment about prominent Korean monks. Jajang-yulsa – 자장 율사 (590-658) I thought I would finally bring attention to some of the spiritual leaders, Korean monks, that helped Buddhism not only survive, but flourish throughout the Korean peninsula. 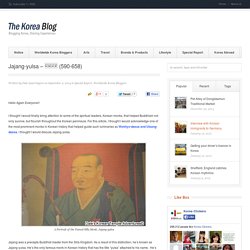 For this article, I thought I would acknowledge one of the most prominent monks in Korean history that helped guide such luminaries as Wonhyo-daesa and Uisang-daesa. I thought I would discuss Jajang-yulsa. A Portrait of the Famed Silla Monk, Jajang-yulsa Jajang was a precepts Buddhist master from the Silla Kingdom. Round Table discussion - Korean Traditional Music. [Herald Interview] Preserving tradition. Clad in a beautiful, yellowish-green hanbok and her hair pulled back in a tight bun at the back of her neck, Kim Hae-sook looks like a living embodiment of Korean tradition. 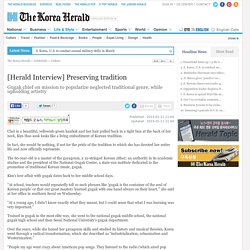 In fact, she would be nothing, if not for the pride of the tradition to which she has devoted her entire life and now officially represents. The 60-year-old is a master of the gayageum, a 12-stringed Korean zither; an authority in its academic studies and the president of the National Gugak Center, a state-run institute dedicated to the promotion of traditional Korean music, gugak.

Kim’s love affair with gugak dates back to her middle school days. Lee Jung-seop’s silver foil drawings return. During the Korean War (1950-53), when art materials such as paper ― not to mention canvas ― were scarce, Korean painter Lee Jung-seop (1916-56) drew and painted on the foil linings of cigarette packs. 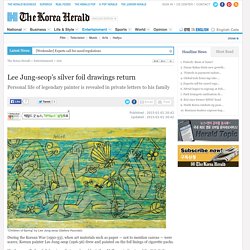 His three small silver foil drawings, first purchased by Arthur McTaggart, director of the U.S. Culture Center in Korea in 1955, and donated to the Museum of Modern Art New York a year later, will be on view in Seoul for the first time since they left the country 60 years ago. MOMA’s decision to include Lee’s foil drawings in its collection was the starting point for his posthumous fame. Lee’s works were largely ignored while he was alive. His silver foil paintings were once dismissed as cheap and lewd. Lee is best known for his painting of a fighting bull, its strength and energy depicted with bold brushstrokes. Why Confucian printing woodblocks matter.

ANDONG, North Gyeongsang Province ― The legacy of Joseon, Korea’s last ruling dynasty, is alive and strong in this historic town. 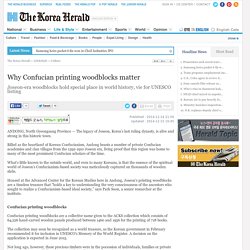 Billed as the heartland of Korean Confucianism, Andong boasts a number of private Confucian academies and clan villages from the 1392-1910 Joseon era, living proof that this region was home to many of the most prominent Confucian scholars of the time. [Herald Interview] Bringing Joseon treasure to light. ANDONG, North Gyeongsang Province ― Scholar Lim No-jig was born in Andong, home to hundreds of “jongga” ― the prestigious households descended from distinguished Joseon-era scholars through the eldest son of each generation. 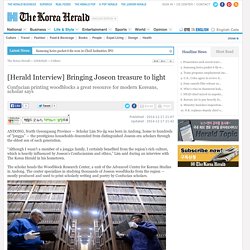 “Although I wasn’t a member of a jongga family, I certainly benefited from the region’s rich culture, which is heavily influenced by Joseon’s Confucianism and ethics,” Lim said during an interview with The Korea Herald in his hometown. The scholar heads the Woodblock Research Center, a unit of the Advanced Center for Korean Studies in Andong. [Herald Interview] Making sense of Confucian printing woodblocks. ANDONG, North Gyeongsang Province ― Despite their historical and cultural value, Confucian printing woodblocks are barely studied. 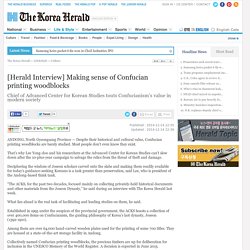 Most people don’t even know they exist. That’s why Lee Yong-doo and his researchers at the Advanced Center for Korean Studies can’t slow down after the 10-plus-year campaign to salvage the relics from the threat of theft and damage. Deciphering the wisdom of Joseon scholars carved onto the slabs and making them readily available for today’s guidance-seeking Koreans is a task greater than preservation, said Lee, who is president of the Andong-based think tank. “The ACKS, for the past two decades, focused mainly on collecting privately-held historical documents and other materials from the Joseon Dynasty,” he said during an interview with The Korea Herald last week. What lies ahead is the real task of facilitating and leading studies on them, he said. [Kim Kyung-ho] Korea’s own historical liability. In a retrial earlier this month, a Seoul appellate court ruled against South Korea’s Vietnam War veterans demanding compensation for their exposure to defoliant. 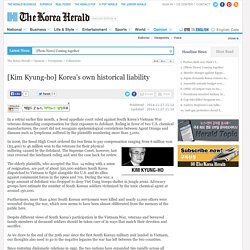 Ruling in favor of two U.S. chemical manufacturers, the court did not recognize epidemiological correlations between Agent Orange and diseases such as lymphoma suffered by the plaintiffs numbering more than 5,000. In 2006, the Seoul High Court ordered the two firms to pay compensation ranging from 6 million won ($5,400) to 46 million won to the veterans for their physical suffering caused by the defoliant. The Supreme Court, however, last year reversed the landmark ruling and sent the case back for review. Korean farmers’ music ‘nongak’ added to UNESCO heritage list. Byonghyon Choi, “The Annals of King T’aejo: Founder of Korea’s Choson Dynasty” (Harvard UP, 2014) Foreign views of Korea in early 1900s. A woman carrying a baby on her back and balancing a huge bucket on her head must have left a strong impression on American artist Lilian May Miller, who was born in Tokyo and briefly lived in Seoul after her father was appointed consul in 1918. 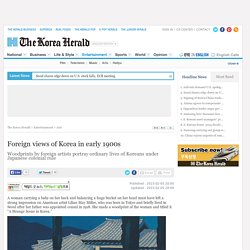 She made a woodprint of the woman and titled it “A Strange Scene in Korea.” Korea had remained an unknown land to most of the world until the early 1900s with few records in foreign languages of its history and culture. While the county was a mystery to many, prints made by foreign artists, based in Japan and traveling to or briefly staying in Korea, offered a glimpse of Korea to the outside world. Eugene Y. Park, “A Family of No Prominence: The Descendants of Pak Tokhwa and the Birth of Modern Korea” (Stanford UP, 2014) Seoul City to tear down colonial building. Seoul City will tear down a building built during Japan’s colonial period as part of its project to mark the 70th anniversary of Korea’s liberation in August, officials said Wednesday. 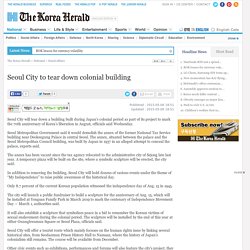 Seoul Metropolitan Government said it would demolish the annex of the former National Tax Service building near Deoksugung Palace in central Seoul. Cultural Films and the National Imaginary in South Korea. A review of Uneven Screens, Contested Identities: USIS, Cultural Films, and the National Imaginary in South Korea, 1945-1972, by Han Sang Kim. Han Sang Kim’s dissertation traces the history of “cultural films” (“munhwa yonghwa,” a genre category derived from the German “Kulturfilme” and imported through Japanese imperialism), educational and propagandistic films produced by the US Information Service (USIS) and through collaborations between Korean and American filmmakers, that were shown to South Koreans between 1945 and 1972, or from the end of the colonization period up to the end of the Third Republic. Uneven Screens, Contested Identities shows how USIS-Korean cultural films were addressed to Korean viewers, depicting model citizens or idealized American life in order to teach spectators how to be cosmopolitan and adopt modern styles of living.

Albert L. Park, "Building a Heaven on Earth: Religion, Activism, and Protest in Japanese Occupied Korea" (U of Hawaii Press, ) Chinese journalist keeps experiences of former 'comfort women' alive through films. Ban Zhongyi, a Chinese journalist living in Japan, still remembers the shock he felt when he first heard the testimonies of former Chinese “comfort women” at a rally in Tokyo in 1992. A woman in the gathering said she was confined by the Japanese military and sexually assaulted during the Second Sino-Japanese War. Ban, a university student at the time, was supporting assistance efforts for Japanese women left behind in China after the war ended. Three years later, he visited Shanxi province in China at his own expense to meet former comfort women, who were forced to provide sex to Japanese soldiers before and during World War II. “The Chinese government was nervous about providing support activities to war victims,” recalled Ban, 56.

“I took a risk by visiting there (to see former comfort women).” Ban met five women aged around 70 years old. When he told them he was from Japan, they became defensive. The women said they were often badly beaten and battered. 846 victims of colonial slave labor confirmed. At least 846 Koreans were forced by Japan to work in overseas locations including Sakhalin, the island off the far eastern end of Russia, during the 1910-45 colonial period, a government fact-finding panel said Friday. The Commission on Verification and Support for the Victims of Forced Mobilization under Japanese Colonialism in Korea under the Prime Minister’s Office said that it had put these Korean victims on its official “list of forcibly mobilized Koreans” for the first time. Based on its analysis of some 135 historical documents from two state historical archives in Sakhalin, the commission discovered that at least 846 Koreans were forced to work for more than 10 Japanese companies in at least 18 locations including Sakhalin.

[Herald Interview] Forgotten veteran tells pain of war, life after. When Seo Jeong-yeol, now 90, was admitted to a military hospital for an injury in 1953 during the Korean War, he was shocked to learn that he had been enlisted under a different name the whole time: Kim Chil-seok. Amid the chaos of the war, records were lost, families were separated, and the then-28-year-old staff sergeant became someone else. “I had the same service number, but my name was different. There was no way to prove that I was me,” Seo said. “After I was discharged, I knocked on all kinds of doors but no one could help me.” As far as records showed, Seo never served in the Army. Korean Studies. Groove Korea. Busan haps. Korean culture and information service. SEOUL Magazine. The magnolia blossoms, they are a-bloomin’. In and around Jeongdok Public Library, Bukchon Hanok Village, Seoul. Photos by Robert Koehler of SEOUL. Get SEOUL Magazine (iOS, Android) Spring colors at Gyeongbokgung Palace in the form of Cornelian cherry trees (a.k.a. sansuyu) and hanbok.

When comparing themselves to what they perceive as Western culture, many Koreans I've met pride themselves and Korea as being a more "communal" society. They see western cultures and Americans as being individualistic and selfish, and not very good at being team players. “Because you’re foreign…” Western, White and English privilege in Korea. *Note: This post chronicles my own experiences with privilege in Korea as a White, American female. I am NOT speaking for all White people, females, Americans, Westerners or even Koreans. [Voice] Is HIV testing of foreign teachers here to stay? It is an experience familiar to many foreign English teachers: Soon after arrival in Korea, their blood is taken and screened, with the results submitted to the immigration authorities. Groove Korea February 2014 by Groove Korea.