Towelie Plays "Funkytown" at the Secret Government Base - SOUTH PARK. Mr. Hankey Walked So the Poo Emoji Could Run. How an early ‘South Park’ favorite predicted the rise of a digital icon When I was a kid, my mom and dad did a decent job of limiting TV time. 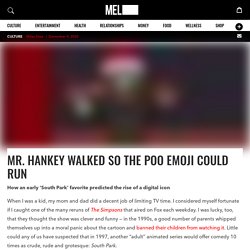 I considered myself fortunate if I caught one of the many reruns of The Simpsons that aired on Fox each weekday. I was lucky, too, that they thought the show was clever and funny — in the 1990s, a good number of parents whipped themselves up into a moral panic about the cartoon and banned their children from watching it. Little could any of us have suspected that in 1997, another “adult” animated series would offer comedy 10 times as crude, rude and grotesque: South Park. I actually retain the memory of hearing about South Park for the first time; that’s how important it seemed to my seventh grade classmates, who whispered about it and recounted the funniest lines in homeroom, the cafeteria and while waiting for assemblies to start. And while Mr. . — Danielle Landry (@DandyLandry) March 14, 2017 . Miles Klee. South Park Season 21 Episode 3 Review - Randy Takes on Christopher Columbus.

Earlier this month, activists painted the hands of a Christopher Columbus statue in Central Park red in protest of the historical figure's 1492 voyage, which scholars believe resulted in the deaths of countless indigenous people. 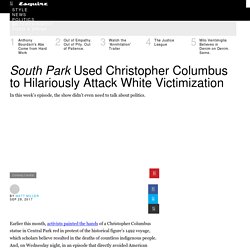 And, on Wednesday night, in an episode that directly avoided American politics, South Park's Randy Marsh took up the Columbus cause. He tore down a statue in town, he called everyone in Columbus, Ohio, to call them racist, and he even worked "on a proposal to make British Columbia just British.” It's a crusade that's outraged the kids in town, who don't want to lose a free holiday from school. They don't know or care who Columbus was, all they remember is the saying “In 1492, Columbus got us a day off skewl,” as Cartman recites. South Park Season 21 Premiere Took on White Supremacists. When South Park first used the phrase, "They took our jobs! 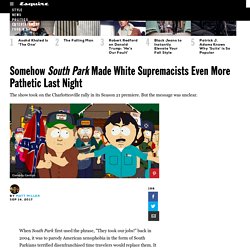 " back in 2004, it was to parody American xenophobia in the form of South Parkians terrified disenfranchised time travelers would replace them. It has returned periodically throughout the years—notably in the 2009 financial crisis episode "Margaritaville. " And last night, in the Season 21 premiere, it was back to mock white frustration. Advertisement - Continue Reading Below Angry that they'll be replaced by technology like Google Home and Amazon Echo, a group of Confederate Flag-waving yokels took to the streets in riot gear, LARPing armor, and Halo helmets to protest.

Earlier this summer, Trey Parker and Matt Stone promised they'd actively avoid Donald Trump. Like it did with PC culture in 2015, and to an extent, trolling in 2016, the show is pinpointing and lampooning our cultural sub-narratives. “There’s been a lot of hurt here—hurt from both sides!” 'South Park' Season Premiere Messed With Viewers' Alexas - Rolling Stone. South Park returned for its 21st season Wednesday, and with it came the requisite analysis and discussions about whether or not it hit the mark in lampooning today's sociopolitical climate. 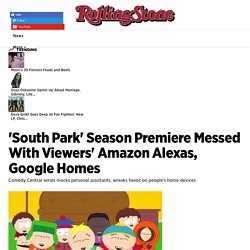 Wednesday night, however, many viewers also experienced a different kind of chaos when the show's storyline about personal assistants like Amazon's Alexa and Google Home triggered their real-life devices in some very interesting ways. The episode, "White People Renovating Houses," largely tackled the white nationalist movement, with a sub-plot revolving around the rise of digital personal assistants in the home.

(Cartman naturally delights in programming the devices to hurl insults at each other). Whenever he or any of the other characters on the show commanded Alexa to perform one task or another, however, viewers’ devices would similarly be activated, resulting in bizarre grocery lists ("titty chips" and "big hairy balls") and alarms reset for odd times of day. Satan Throws a Fit at His Super Sweet 16 Party (Season 10, Episode 11) Butters Stotch - Wikipedia. Leopold "Butters" Stotch is a fictional character in the animated television series South Park. 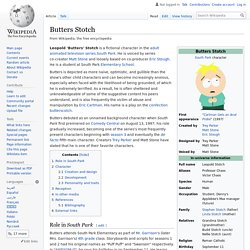 He is voiced by series co-creator Matt Stone and loosely based on co-producer Eric Stough. He is a student at South Park Elementary School. Butters is depicted as more naive, optimistic, and gullible than the show's other child characters and can become increasingly anxious, especially when faced with the likelihood of being punished, which is usually just being grounded, of which he is extremely terrified. As a result, he is often sheltered and unknowledgeable of some of the suggestive content his peers understand, and is also frequently the victim of abuse and manipulation by Eric Cartman.

His name is a play on the confection butterscotch. Role in South Park Butters as his evil alter ego "Professor Chaos" As a result, Butters vengefully adopted the alter ego of Professor Chaos. Character Creation and design Development Personality and traits Reception In other media References. 'South Park' Season 20 Finale Recap - 'South Park' Ends Season 20 by Admitting Defeat. When South Park concluded its 19th season nearly a year ago to the day, the world was a strikingly different place. 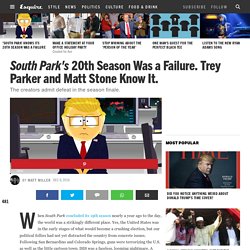 Yes, the United States was in the early stages of what would become a crushing election, but our political follies had not yet distracted the country from concrete issues. Following San Bernardino and Colorado Springs, guns were terrorizing the U.S. as well as the little cartoon town. ISIS was a faceless, looming nightmare. A former reality TV star was making a mockery of the Republican Party and providing great material for comedians. Gentrification was changing the shape of our cities, and PC culture was annoying as hell. Advertisement - Continue Reading Below. South Park Has Finally Accepted Donald Trump As President in Episode 7. It took a while to sink in, and maybe not everyone is there yet, but Donald Trump has been elected President of the United States. 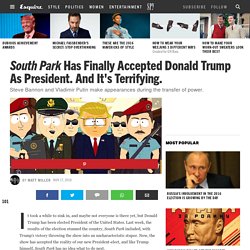 Last week, the results of the election stunned the country, South Park included, with Trump's victory throwing the show into an uncharacteristic stupor. Now, the show has accepted the reality of our new President-elect, and like Trump himself, South Park has no idea what to do next. Advertisement - Continue Reading Below. South Park Presidential Debates: Season 20 Takes on Donald Trump and Hillary Clinton in Episode Three. Mr. 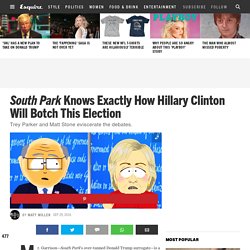 Garrison—South Park's over-tanned Donald Trump surrogate—is a man unfit to be president. Yet, somehow he's the only one who realizes that he has none of the ethical values, personality traits, or basic knowledge of U.S. government to complete even the simplest requirements of the job. In episode three of season 20, South Park took its first full-on shot at the presidential election, by mocking Monday's laughable debates. Advertisement - Continue Reading Below In his opening question, Lester Holt asks Garrison about ground troops in Syria. I don't know what the fuck i'm doing. Unfortunately, before the debate, Turd Sandwich—South Park's Hillary Clinton-looking Clinton surrogate—was told by her handlers to respond to all of Garrison's comments by calling him a liar.

"I am giving you this, lady," Garrison responds. And so, after the debate, people want to vote for Mr. Of course, at every turn, Clinton is doing her best to blow what should be a really fucking easy win. ‘South Park’ Creators on Trump and Hillary: ‘The Giant Douche and the Turd Sandwich’ Before season 20 of ‘South Park’ kicks off this month, Trey Parker and Matt Stone tell us what they have planned for Hillary and Trump. 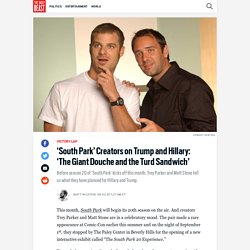 This month, South Park will begin its 20th season on the air. And creators Trey Parker and Matt Stone are in a celebratory mood. The pair made a rare appearance at Comic-Con earlier this summer and on the night of September 1st, they stopped by The Paley Center in Beverly Hills for the opening of a new interactive exhibit called “The South Park 20 Experience.” To mark the occasion, Comedy Central also released a new retrospective video that looks back at the show’s 19 seasons, by the numbers, and cites milestones like 49 Cartman dumps, 84 Stan vomits, and one Gay Fish. “The first time we saw that we were sitting in front of a bunch of people at Comic-Con,” Parker tells The Daily Beast before sitting down with Stone for a panel discussion moderated by Viacom chief Doug Herzog, who helped bring the show to Comedy Central in the mid-’90s. South Park rips Alec Baldwin apart in a scathing parody. Comedy Central’s “South Park” kicked off its 17th season on Wednesday night, picking the shadowy NSA and overly excitable Alec Baldwin as its first lampoon-worthy targets of the year. 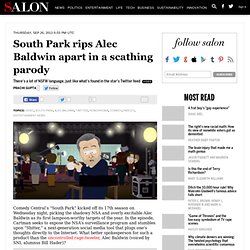 In the episode, Cartman seeks to expose the NSA’s surveillance program and stumbles upon “Shitter,” a next-generation social media tool that plugs one’s thoughts directly to the Internet. What better spokesperson for such a product than the uncontrolled rage-tweeter, Alec Baldwin (voiced by SNL alumnus Bill Hader)? “Hello, I’m Alec Baldwin, and I love social media. But sometimes, I accidentally tweet things that are mean or homophobic,” begins Baldwin’s commercial. “I don’t think that way — I just type that way. Baldwin then cuts off his thumbs. Enter: the Shitter device.