Class Divisions in the South

Dalton's Annotation. American Cultural History - 1930-1939. By the 1930s money was scarce because of the depression, so people did what they could to make their lives happy. 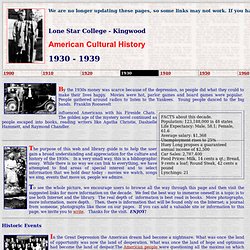 Movies were hot, parlor games and board games were popular. People gathered around radios to listen to the Yankees. Young people danced to the big bands. Franklin Roosevelt influenced Americans with his Fireside Chats. Braden's Annotation. Class in the 1930's. Despite the fact that nearly everyone in the country was hurt to some degree by onset of the Depression, the 1930's was a period of exacerbted class conflict. 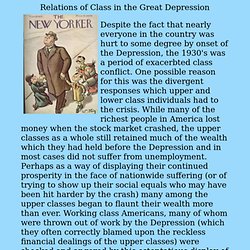 One possible reason for this was the divergent responses which upper and lower class individuals had to the crisis. While many of the richest people in America lost money when the stock market crashed, the upper classes as a whole still retained much of the wealth which they had held before the Depression and in most cases did not suffer from unemployment. Perhaps as a way of displaying their continued prosperity in the face of nationwide suffering (or of trying to show up their social equals who may have been hit harder by the crash) many among the upper classes began to flaunt their wealth more than ever. 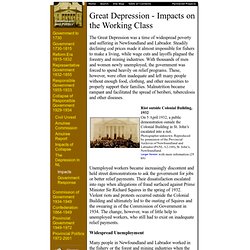 Steadily declining cod prices made it almost impossible for fishers to make a living, while wage cuts and layoffs plagued the forestry and mining industries. Braden's Annotation: Dalton's Annotaion.