Daylight savings time 2017: Is it time for a national discussion? Daylight Saving Time is a controversial topic of discussion, but what are the pros and cons of changing our clocks twice a year? 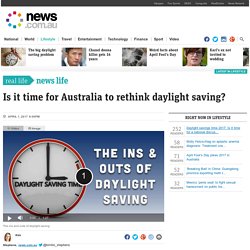 Daisy Miller trying to come to terms with daylight savings. Pic: tait schmaal. AS the sun sets on yet another summer of daylight saving for half of Australia, the perennial issue — arguably one of the country’s most divisive — resurfaces. Like, ahem, clockwork. For years, states without the annual clock migration have fought it out as to whether the measure should be introduced and in those states where it has reigned for years, there remains bitter lament among many that it was ever legislated. In simple terms, the battle generally comes down to a polarisation between the farmers and agricultural sector, who vigorously oppose it, and the office workers in the business sector who favour the extra hour of sunlight at the end of the day.

Know your chronotype: How being a night owl or early bird impacts your health. With new research suggesting morning people tend to make healthier decisions, many night owls have been left wondering if they're doomed just because they're up for Lateline every evening. 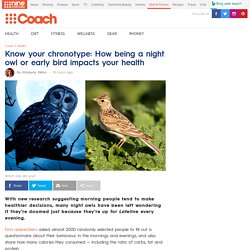 Finn researchers asked almost 2000 randomly selected people to fill out a questionnaire about their behaviour in the mornings and evenings, and also share how many calories they consumed — including the ratio of carbs, fat and protein. They found that that early bird “larks” who got up earlier tended to eat earlier in the day and make more balanced choices, while the night owls were more likely to eat sugary foods in the morning, plus sugary and fatty foods at night. It's enough to make you feel like throwing your hands in the air if you loathe mornings, but sleep scientist Dr Carmel Harrington, author of The Sleep Diet, told Coach that night owls are not doomed to an unhealthy existence.

What your dreams really mean, according to a dream expert. Everything you need to know about lightning. Sydney's top 12 noodle soups. McDonald’s french fries, Krispy Kreme doughnuts have more calories in Australia than in the US. Loaded: 0% Progress: 0% McDonald's Canada answer the age old question of what really goes into those crispy, golden nuggets. 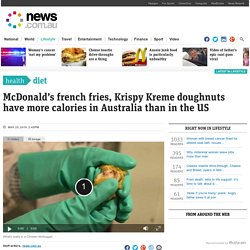 New graphics show the different sizes and calorie counts for junk food favourites around the world. NEW data about junk food’s calorie count and portion size shows that McDonald’s french fries and Krispy Kreme doughnuts have more calories in Australia than in the US. The research, conducted by ComparetheMarket.com.au, analyses the portion size and calorie count of popular ‘quick eats’ in Australia, Japan, New Zealand, the UK, Germany, Hong Kong, Portugal, Columbia, Singapore, Indonesia, the US and Canada. 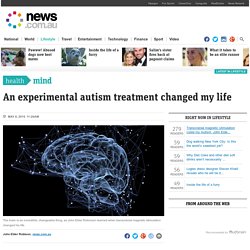 ZAP your brain? You must be crazy! That’s a common reaction when people hear that I volunteered for a series of neuroscience experiments in which scientists used high power electromagnetic fields to induce tiny electrical currents in the circuits of my brain, in an effort to help me see emotional cues in other people. It wasn’t just scientific zeal that made me do it.

There was a vaguely defined but powerful hope of “making myself better.” You see, I’m autistic, and as much as I appreciate my autistic gifts, I’ve always had a hard time connecting to people. Improve memory recall and learn speed reading with these ‘brain supercharge’ hacks. Dr Norman Doidge has found we can do remarkable things with our brains. 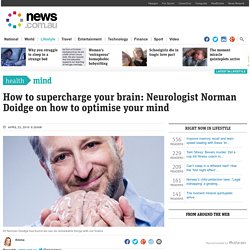 IT sounds like science-fiction, but radical psychiatrist Norman Doidge says our brains can often heal with a little help and create new pathways that could change our lives. Simple movements of the body, meditation techniques and thought exercises can teach us to do things we never thought possible. The groundbreaking research in his new book, The Brain’s Way of Healing, shows how people suffering from chronic pain, stroke, learning difficulties or Attention Deficit Disorder can with training in many cases resolve.

The Difference Between Club Soda, Seltzer And Tonic Water. You’d think that when dealing with something as simple and straightforward as water, there couldn’t be any confusion. 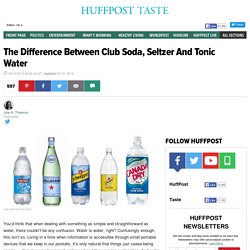 Water is water, right? Confusingly enough, this isn’t so. Living in a time when information is accessible through small portable devices that we keep in our pockets, it’s only natural that things just cease being simple — they become tampered, enhanced and they require explanation. And water is not exempt from that. You may have noticed when walking down the aisle of the grocery store that there are many options when it comes to carbonated water (also referred to as bubbly water, sparkling water, club soda, soda water and seltzer). UCLA-Buck Institute Study. Patient one had two years of progressive memory loss. 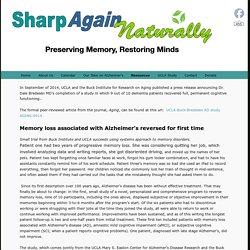 She was considering quitting her job, which involved analyzing data and writing reports, she got disoriented driving, and mixed up the names of her pets. Patient two kept forgetting once familiar faces at work, forgot his gym locker combination, and had to have his assistants constantly remind him of his work schedule. Sugar addiction is like drug abuse. Sugar is doing the same thing to our brain as cocaine. 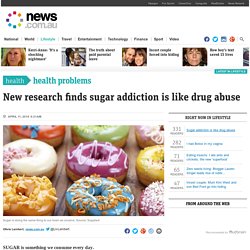 Source: Supplied SUGAR is something we consume every day. It’s in our coffee, in our tomato sauce and in that chocolate bar you’ve treated yourself to. Yoghurt, eggs or muesli: Which is the best breakfast for weight loss? Protein rich, dairy based breakfasts have been found to be most effective for weight loss. 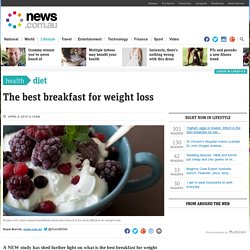 How to tell if other people think you're attractive, according to science. Loaded: 0% Progress: 0% Mindwise book trailer. 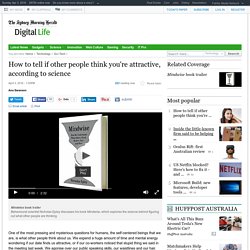 Williamtown water contamination highlights dangers of PFOS and PFOA. Contaminated water has been leaking from Williamtown air base. THE morning Rhianna Gorfine found out the food and water on her NSW farm had potentially been contaminated for years, her day began like any other. Ms Gorfine and her husband Cain were hustling to get their children ready for school when the email came through. A friend had sent through a link to a local newspaper story saying “you should read this and let people know”. “I remember thinking, this is unbelievable, this is crazy,” Ms Gorfine told news.com.au. The Truth About Carbs (No, They're Not What Is Making You Fat)  Carbohydrate is a dirty word these days. Some even consider carbs to be the big, bad wolf of the nutritional world. But why is this the case? Just in case you need it, here's a refresher: Carbohydrates are found in highly nutritious food such as bread, cereal, fruit, starchy vegetables, milk, yoghurt, legumes and beans.

But they're also found in less-nutritious food such as lollies, chocolate, cakes and pastries, and drinks like soft drinks, cordial and fruit juice. Avoid feeling tired by eating these foods. The best exercise for fat loss: run, swim, or skip? Art and About: Taste testing the menu at Australia’s first water only bar. Neuroscientist Shows What Fasting Does To Your Brain & Why Big Pharma Won’t Study It. ScienceIQ.com. Untidy beds may keep us healthy. Failing to make your bed in the morning may actually help keep you healthy, scientists believe. Mcr-1, e.coli: New superbug that is resistant to all antibiotics. Early puberty: Hormones and behaviour linked in primary school boys. HIV prevention drug PrEP: Little blue pill dividing Australia’s gay community.

Truvada is the magic pill that prevents HIV, but not everyone approves. How to stop a baby crying: Video reveals ‘guaranteed’ method. How to Fall Asleep in Less Than 1 Minute. Myopia epidemic: Kids urged to drop devices and go outside – or risk blindness. Prostate cancer patients zapped with electricity in new treatment. Why our salt is packed with plastic.

How to get a flat stomach without doing a single crunch, Buro 24/7 Australia. The fats you don’t need to fear, and the carbs that you do. Benefits of eggs for breakfast: weight loss, high protein, keep you full. Live longer with bacteria injections? Scientist tests ‘eternal life’ experiment on himself. I tried the $22 toasted cheese sandwich that Sydney is going nuts about. Girl, 12, beats Einstein and Stephen Hawking to get top score in IQ test. Tropsi - start playing right now!! The CSIRO says pears could be a healthy hangover cure. How to beat a lie detector: Ex-detective’s fight against the ‘polygraph myth’ How you talk to your baby now can impact social skills later. We are stretching for all the wrong reasons. Seven healthy snack ideas for kids. How Coke can impact your body up to an hour after drinking it.

Is your ‘healthy’ snack really healthy? Chef and mum quits Orange Grove Markets after complaints about her son, who has Down syndrome. Just ONE night of bad sleep damages the DNA in our biological clocks, claims study. What a healthy and an unhealthy lunch box looks like. Brisbane mother ‘unschools’ children because education system failed them.

These five NSW primary schools are the state's biggest overachievers. The shocking truth about how much sugar you’re eating. Why being locked in a room with your children has never been so much fun. Emotional back pain: the cause for our country's biggest problem? Tim Robards: The exercise that could change your life. Members Area Access. How to fall asleep in 60 seconds. A new anti-ageing drug could prevent diseases associated with growing older. Multitasking makes you stupid, studies find. Myopia fear as study finds 4 in 5 Chinese students shortsighted. Vitiligo Support International - Vitiligo Products and Services. RTO Partnership Agreements – RTOs For Sale. 6 things your pee can tell you. 15 Eating Habits That Make You Live Longer.

Should you exercise when you’re still sore from your last workout? Andreja Pejic becomes first transgender model to be profiled in Vogue. Food health star ratings: Kellogg's reveals the cereal that gets 1.5 stars. If you’re spending hour after hour hitting the books without a break you’re not doing it right. Healthy Live Style. Blue zones: The places where people are living longer. The 31 breakthrough medicines Australians can’t get, according to Medicines Australia report. Red Rooster food chain accused of deceiving customers with 'nothing artificial' claims. The Bachelor’s Tim Robards: Should I exercise when I’m sick? Parents who 'over-value' their kids may turn them into narcissists: study. Good Food - Going nuts: Why are Australians allergic to everything? Alzheimer's disease linked to heart's effect on the brain. Allergy risk may be tied to how you wash your dishes.