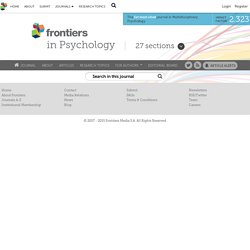 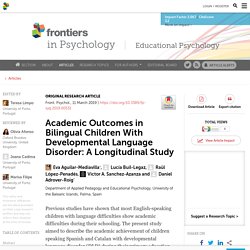 According to Stark and Tallal (1981), and later to Leonard (1998), diagnostic criteria for children with SLI included normal cognitive functioning (average scores on non-verbal intelligence tests), normal hearing, normal emotional and social development, and no evidence of brain damage or other neurological deficits; however, these children show a clear delay in language development. Nevertheless, during the last years, a high number of clinicians and researchers has noted that SLI was too exclusive and failed to consider children with both language and non-verbal IQ issues.

Under the direction of Dorothy Bishop, the CATALISE consortium (Criteria and Terminology Applied to Language Impairments: Synthesizing the Evidence) conducted a Delphi study that led to a change of the diagnostic label, from SLI to DLD. A Concise History of Asperger Syndrome: The Short Reign of a Troublesome Diagnosis. Introduction: Refrigerator Mothers and Fine-Boned Aristocrats The entry of autism and Asperger syndrome (AS) into the history of psychopathology was marked by extraordinary coincidences. 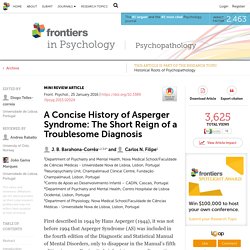 Both disorders were first described by Kanner (1943) and Asperger (1944), respectively. Both were Austrian-born physicians and, though unaware of each other’s writings, both used the term “autistic” to describe a unique group of children who shared features of impaired social interaction and restricted, repetitive behaviors and interests. Both Kanner (1943) and Asperger (1944) borrowed the term “autistic” from Eugen Bleuler, who used it in his “Dementia Praecox or the Group of Schizophrenias” to describe extreme social withdrawal and self-centeredness in patients with schizophrenia.

FIGURE 1. Defining Asperger Syndrome: A Tower of Babel The End in the Beginning The consecration of AS as a distinct diagnosis was surrounded by controversy from the outset. Is as Different from HFA? Alphabetism in reading science. There has been mounting concern among social scientists that conclusions from studies conducted on highly educated populations from affluent European cultures may have limited applicability to human behavior in general (Henrich et al., 2010). 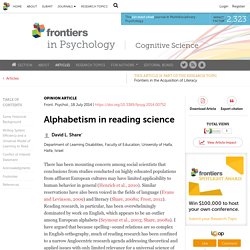 Similar reservations have also been voiced in the fields of language (Evans and Levinson, 2009) and literacy (Share, 2008a; Frost, 2012). Reading research, in particular, has been overwhelmingly dominated by work on English, which appears to be an outlier among European alphabets (Seymour et al., 2003; Share, 2008a). I have argued that because spelling–sound relations are so complex in English orthography, much of reading research has been confined to a narrow Anglocentric research agenda addressing theoretical and applied issues with only limited relevance for a universal science of reading and literacy.

My intention here is not to reiterate my 2008 arguments or even expand them, but to move on to another major obstacle to progress. 1. 2. 3. 4. Among three different executive functions, general executive control ability is a key predictor of decision making under objective risk. 1General Psychology: Cognition, University of Duisburg-Essen, Duisburg, Germany2Erwin L. 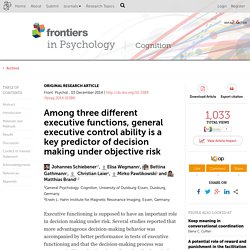 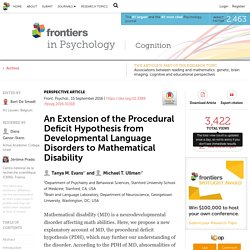 Mathematical disability (MD), which includes developmental dyscalculia, is a neurodevelopmental disorder in which math abilities are lower than expected given the individual’s age, where the difficulties are not better accounted for by intellectual disability, other developmental disorders, or neurological or motor disorders (American Psychiatric Association, 2013). MD affects 7–10% of school-age children worldwide (Gross-Tsur et al., 1996; Shalev et al., 2000), and can persist as functional innumeracy into adolescence and adulthood (Geary et al., 2013). Anomalous Cerebellar Anatomy in Chinese Children with Dyslexia. Introduction. 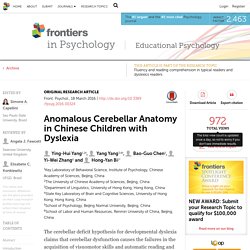 A Picture Is Worth… Both Spelling and Sound. Introduction The Lexical Quality Hypothesis (e.g., Perfetti and Hart, 2002; Perfetti, 2007) posits that the high-quality word representations that underlie fluent reading are characterized by well-integrated, automatically retrieved orthographic (spelling), phonological (sound), and semantic (meaning) information. 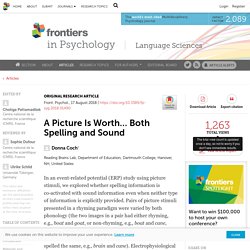 Consistent with this, previous psycholinguistic studies have shown that both orthographic and phonological codes are accessed in young adults during both reading (e.g., Tanenhaus et al., 1980; Pexman et al., 2002) and listening (e.g., Seidenberg and Tanenhaus, 1979; Tanenhaus et al., 1980; Ziegler et al., 2004; Chéreau et al., 2007) tasks. For example, Seidenberg and Tanenhaus (1979) found that, whether a cue word was presented auditorily or visually, participants were faster to detect orthographically similar (e.g., pie-tie) than orthographically dissimilar (e.g., rye-tie) rhymes in a subsequent list of auditory words. But what if no lexical information is provided? TABLE 1. 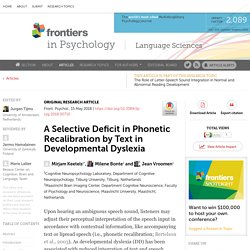 The automatic coupling of graphemes with speech is crucial to become a fluent reader in an alphabetic script. Associations between speech understanding and auditory and visual tests of verbal working memory: effects of linguistic complexity, task, age, and hearing loss. Atypical White Matter Connectivity in Dyslexic Readers of a Fairly Transparent Orthography. Introduction Reading is a complex cognitive function, requiring matching of visual symbols both to the sound units of speech and directly to word meaning (Ehri, 2005; Nation, 2009; Blomert, 2011). 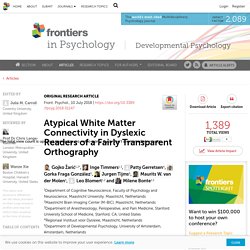 Keywords: auditory driving, autonomic, binaural-beat, exercise, heart rate variability, relaxation Received: 21 August 2014; Accepted: 14 October 2014; Published online: 14 November 2014. *Correspondence: Patrick A. Auditory training can improve working memory, attention, and communication in adverse conditions for adults with hearing loss. Listening and Communication in Adverse Conditions It is widely accepted that understanding speech in background noise is the most common problem for people with hearing loss (Vermiglio et al., 2012; Humes et al., 2013), as characterized by the typical statement “I can hear but I cannot understand what is being said.” In addition to a loss of hearing sensitivity, there may be additional deficits of temporal and spectral processing that contribute to listening difficulties (Hopkins and Moore, 2011).

Furthermore, there is mounting evidence that non-sensory factors such as cognition, motivation, and context, play an important role in both listening to speech (one-way interaction process) and communication (bi-directional interaction; Kiessling et al., 2003; Pichora-Fuller and Singh, 2006; Rudner et al., 2011). Analysis of cursive letters, syllables, and words handwriting in a French second-grade child with Developmental Coordination Disorder and comparison with typically developing children.

Basic auditory processing and sensitivity to prosodic structure in children with specific language impairments: a new look at a perceptual hypothesis. Children Probably Store Short Rather Than Frequent or Predictable Chunks: Quantitative Evidence From a Corpus Study. 1. Introduction The present study investigates undersegmented chunks in child language development. Previous work suggests that young children sometimes store speech sequences such as Oh dear or Where's it gone as internally unanalyzed chunks, without having discovered smaller constituents such as words or phonemes (Lieven et al., 1992; Pine and Lieven, 1993).