What can be done better

KenFM über die spektakuläre Friedensfahrt nach Moskau. Das Ende des Euro kommt 2017. Europeans have been blackmailed and betrayed. No wonder they're angry. The European Union was often unpopular even before the financial crisis. 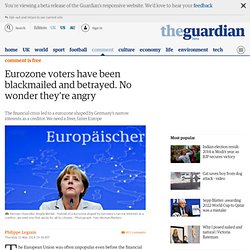 But the long slump and eurozone policymakers' blunders have created a political firestorm. Support for the EU has plunged to all-time lows. Most Europeans now associate it with austerity, recession and German domination, with constraints on what they can do, rather than on how we can achieve more together. Anti-EU parties, often xenophobic and comprising reactionary extremists, are set to do well in next week's European elections. Europe urgently needs to change course. At your service - Who can help you?»European Ombudsman. What does he do? 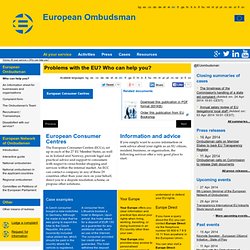 The European Ombudsman is an independent and impartial body that holds the EU administration to account. The Ombudsman investigates complaints about maladministration in EU institutions, bodies, offices, and agencies. Only the Court of Justice of the European Union, acting in its judicial capacity, falls outside the Ombudsman's mandate. Professor Patomäki: ‘There are good reasons to expect that the neoliberal era is coming to an end’ Continuing our interview series of public intellectuals across Europe on the causes and effects of the crisis, Euro Crisis in the Press talks to Heikki Patomäki, Professor of World Politics at University of Helsinki and author of a recent monograph on the anatomy of the Euro crisis (published in English by Zed Books in March 2013). 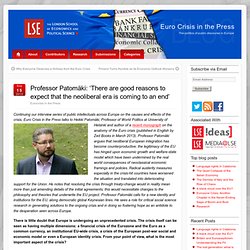 Professor Patomäki argues that neoliberal European integration has become counterproductive; the legitimacy of the EU has hinged upon economic growth and welfare-state model which have been undermined by the real world consequences of neoclassical economic framings and policies. Radical austerity measures especially in the crisis-hit countries have worsened the situation and translated into deteriorating support for the Union. LobbyControl. Corporate Accountability International. Exposing the power of corporate lobbying in the EU. Germany Has Created An Accidental Empire. German voters must break the Merkel mindset that got them into this. Stopsurveillance.org. Europe can't cut and grow.

Overspending by governments, we have been told, triggered this crisis. 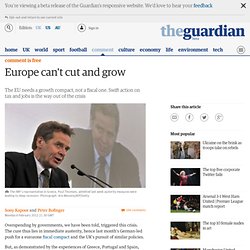 The cure thus lies in immediate austerity, hence last month's German-led push for a eurozone fiscal compact and the UK's pursuit of similar policies. But, as demonstrated by the experiences of Greece, Portugal and Spain, this course leads to biting, deep recessions and worsens public indebtedness. The IMF acknowledged as much last week. A focus on growth, not austerity, is the correct answer for Europe's ills. The case for "growth-friendly austerity" relies on the argument that public cuts are compensated for by consumers and businesses spending more, and with greater efficiency. When EU leaders next meet on 1 March, they must adopt a binding pledge to increase growth-enhancing public investments in the EU, outlining a firm strategy for funding these – in effect, a growth compact. 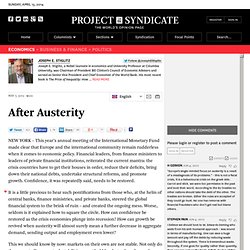 Click to hide this space NEW YORK – This year’s annual meeting of the International Monetary Fund made clear that Europe and the international community remain rudderless when it comes to economic policy. Financial leaders, from finance ministers to leaders of private financial institutions, reiterated the current mantra: the crisis countries have to get their houses in order, reduce their deficits, bring down their national debts, undertake structural reforms, and promote growth. Confidence, it was repeatedly said, needs to be restored. New York Times Reporters need to Read Krugman’s Columns. By William K. 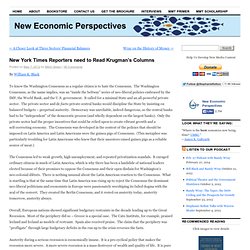 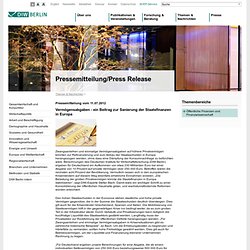 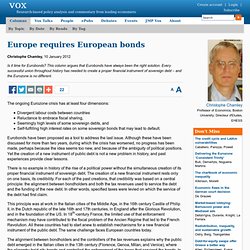 Eurobonds have been proposed as a tool to address the last issue. Although these have been discussed for more than two years, during which the crisis has worsened, no progress has been made, perhaps because the idea seems too new, and because of the ambiguity of political positions. Yet the creation of a new instrument of public debt is not a new problem in history, and past experiences provide clear lessons. What Can Save the Euro? Exit from comment view mode. 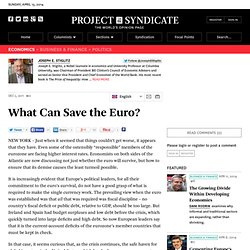 The European Central Bank managed to relieve an incipient credit crunch through its long-term refinancing operation (LTRO), which lent over a trillion euros to eurozone banks at one percent. Le Monde diplomatique, deutsche Ausgabe.