The Planning Fallacy: Why We Always End Up Overloaded At Work. You look down at your to-do list and your heart starts racing. 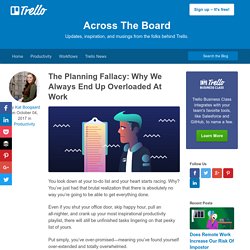 Why? You’ve just had that brutal realization that there is absolutely no way you’re going to be able to get everything done. Even if you shut your office door, skip happy hour, pull an all-nighter, and crank up your most inspirational productivity playlist, there will still be unfinished tasks lingering on that pesky list of yours. Put simply, you’ve over-promised—meaning you’ve found yourself over-extended and totally overwhelmed. Now what? While there’s no magic formula that will instantly make half of your to-do list vanish into thin air (you wish, right?) Why Do We Do This To Ourselves? Before you can jump into fixing the problem, it’s important that you understand it first. I know, I know—you’re stretched thin and don’t have time for a detailed psychology lesson about what drives your compulsive need to say “yes” to everything. The Trap Of The Planning Fallacy Plenty of studies exist to back this fact up. 1.

Getting the Right Things Done

Kanban Method. Project Management. Planner. Review. Multitasking. Procrastinating. Goal. How to Put Pen to Paper and Get Things Done. Writing things down, sketching them out, and getting them out of your head and onto paper can be immensely helpful — especially if you need to clarify your goals, set priorities, or learn how to manage your time so you can meet the goals you do set. 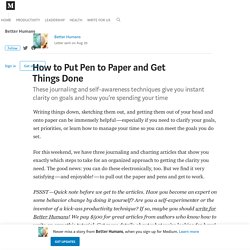 For this weekend, we have three journaling and charting articles that show you exactly which steps to take for an organized approach to getting the clarity you need. The good news: you can do these electronically, too. But we find it very satisfying — and enjoyable! — to pull out the paper and pens and get to work. PSSST — Quick note before we get to the articles. The “Eisenhower Box” Dwight Eisenhower lived one of the most productive lives you can imagine. 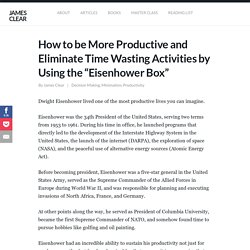 Eisenhower was the 34th President of the United States, serving two terms from 1953 to 1961. During his time in office, he launched programs that directly led to the development of the Interstate Highway System in the United States, the launch of the internet (DARPA), the exploration of space (NASA), and the peaceful use of alternative energy sources (Atomic Energy Act). Before becoming president, Eisenhower was a five-star general in the United States Army, served as the Supreme Commander of the Allied Forces in Europe during World War II, and was responsible for planning and executing invasions of North Africa, France, and Germany.

At other points along the way, he served as President of Columbia University, became the first Supreme Commander of NATO, and somehow found time to pursue hobbies like golfing and oil painting. How To Chart A New Course For Your Life With 3 Simple Diagrams. 3. The Time Management Matrix My new adventure began with a sailing journey. The sea helped clear my mind, and I was ready to implement the lessons from the previous months. I reviewed my ikigai diagram and the pie chart of time and set myself to work. My goal: building a sustainable, fulfilling, location-independent lifestyle. I started my own business, ensuring that it allowed me to be in the center of the ikigai graph. However, as the months passed by, I realized that my progress was slower than I had expected. My business was not earning enough to provide me with financial stability, and to speed up the process, I was gradually devoting more and more time to it.

One day, I decided to draw a new pie chart of my current time distribution and I realized straight away that I was very far from where I wanted to be. Everything demanded my attention, and since I was short on money, I couldn’t outsource the work that I didn’t want to do myself. What is it for? When to use it? What is it? 1. 1. How to Scale Yourself and Get More Done Than You Thought Possible. The following is a detailed write-up of a popular productivity talk delivered by Scott Hanselman. 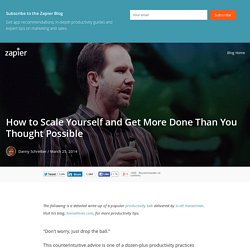 Visit his blog, hanselman.com, for more productivity tips. "Don't worry, just drop the ball. " This counterintuitive advice is one of a dozen-plus productivity practices preached by Scott Hanselman, a program manager at Microsoft, author and avid blogger and speaker. "Dropping the ball is sometimes the right answer," Hanselman says. "Let a ball drop. Hanselman's not the person you'd to expect to hear encourage dropping the ball and discourage burning the midnight oil. How does he do it? "A lot of people say, 'Well, Scott, you're doing all this stuff. "It turns out," he continues, "the less that you do, the more of it that you can do. Scale Yourself In a 40-minute talk Hanselman originally delivered in 2012, and has since presented several times—most recently at South by Southwest Interactive earlier this month—he shares his productivity practices.