It's not the first such enterprise in the world -- successful predecessors can be found in such varied locales as Bahrain, the Netherlands, and Atlanta, Ga. -- but the existence of such a market still raises some interesting questions. For instance, what makes a sex shop halal? And what's behind their spread? According to Hamza Yusuf, an American Islamic scholar and co-founder of Zaytuna College in Berkeley, Calif., the trend is, if anything, reflective of the adaptive qualities of capitalism -- not any trend in the Muslim world, where items like herbal aphrodisiacs have been commonplace but under the radar for centuries.

"Muslim countries have all of these but they don't advertise them," he told Foreign Policy by phone. But maybe that's giving it too much credit. Ramadan fast sparks personal freedom debate. In Pakistan, saying goodbye can be a religious statement. Pakistanis who continue to use 'Khuda hafiz' see the phrase as 'part of an ideological battle to retain what they see as a more pluralistic approach towards religion'. 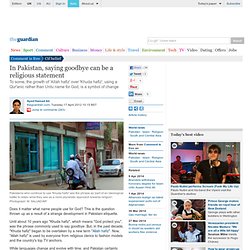 Photograph: M. SAJJAD/AP Does it matter what name people use for God? This is the question thrown up as a result of a strange development in Pakistani etiquette. Until about 10 years ago "Khuda hafiz", which means "God protect you", was the phrase commonly used to say goodbye. While languages change and evolve with time, and Pakistan certainly has bigger problems such as corruption and militancy, the alteration has unsettled liberals in Pakistan, who say it reflects a wider change in the country's cultural landscape. Khuda is the Urdu word for God, borrowed from Persian. Islamic University Scholar Finds Headscarves Not Required. Being a Muslim and being a feminist are not mutually exclusive by Fatemeh Fakhraie.

Pakistan: Moral Policing On A TV Show And The Consequence. On January 17, 2012, a morning show was broadcast on Pakistani news network Samaa TV where its female host, Maya Khan, and a group of middle aged women were seen scouring the parks of Karachi. 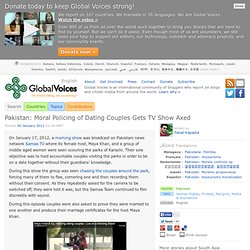 Their sole objective was to hold accountable couples visiting the parks in order to be on a date together without their guardians’ knowledge. During this show the group was seen chasing the couples around the park, forcing many of them to flee, cornering one and then recording them without their consent. As they repeatedly asked for the camera to be switched off, they were told it was, but the Samaa Team continued to film discreetly with sound.

During this episode couples were also asked to prove they were married to one another and produce their marriage certificates for the host Maya Khan. Screenshot from Youtube Video. This episode prompted strong protests from social media users in Pakistan, and many reacted like Mehreen Kasana, who said: Graphic courtesy Teeth Maestro. Full: A veiled reading of Islam that Saudi women still pay for. It would be hard for me to picture the tents of an election campsite set up for a woman running for any public or political office in Saudi Arabia. 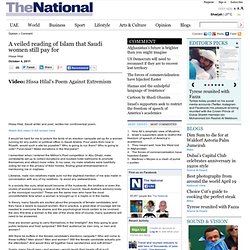 Four years from now in Riyadh, would such a site be possible? Who is going to run them? Who is going to vote? Fund-raise? Make donations in the first place? I remember when I entered the Million's Poet competition in Abu Dhabi, male contestants set up to collect donations and booked hotel ballrooms to promote themselves and attract more votes. Likewise, male non-relatives made sure not the slightest mention of me was made in conversation with any of my relatives - to avoid any awkwardness. In a society like ours, what would become of the husbands, the brothers or even the uncles of women earning a seat on the Shura Council, Saudi Arabia's advisory body, or the municipal councils? In theory, many Saudis are excited about the prospects of female candidates, and they have a desire to support women. Page 2 of 2 One-page article. 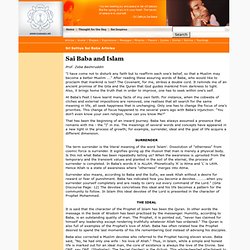 Zeba Bashiruddin "I have come not to disturb any faith but to reaffirm each one's belief, so that a Muslim may become a better Muslim ... " After reading these assuring words of Baba, who would like to proclaim that mankind is lost? The Covenant, for me, strikes a double cord. It reminds me of an ancient promise of the Gita and the Quran that God guides mankind from darkness to light. At Baba's Feet I have learnt many facts of my own faith. That has been the beginning of an inward journey. The term surrender is the literal meaning of the word 'Islam'. Surrender also means, according to Baba and the Sufis, we seek Allah without a desire for reward or fear of punishment. Reviews for The Meaning of the Holy Qu&#039;ran: Books: Abdullah Yusuf Ali.